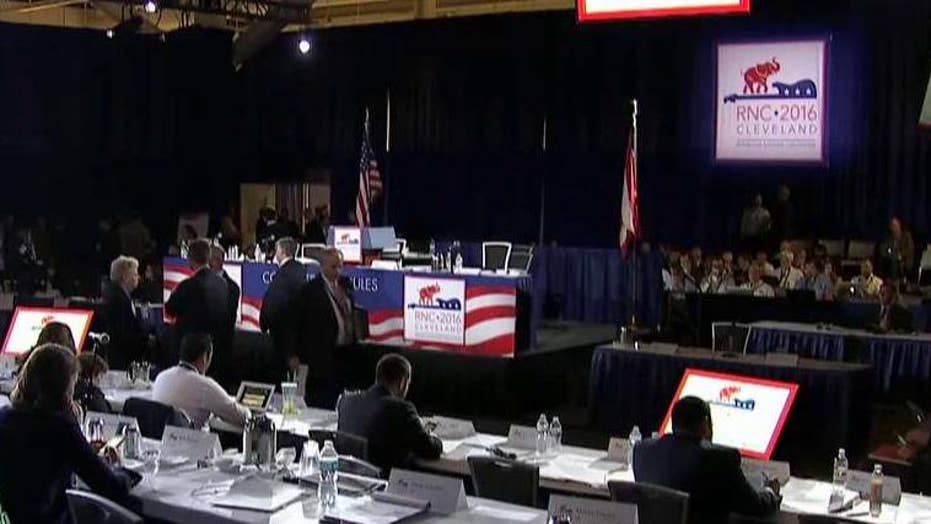 CLEVELAND – Top Republican officials and recalcitrant conservatives held closed-door talks Thursday in what some delegates said was an effort to head-off a clash at next week's GOP national convention that could embarrass the party.

Among those said to be involved in meetings were GOP Chairman Reince Priebus and Ken Cuccinelli, a leader of the conservatives who was an adviser to the defunct presidential campaign of Texas Sen. Ted Cruz.

Conservative convention delegates allied with Cuccinelli have proposed "unbinding" delegates so they would not have to back the candidates they were committed to by state primaries and caucuses. They are also seeking to bar lobbyists from serving on the 168-member Republican National Committee -- the party's leadership from around the country -- and to make other changes that could be seen as a slap at party leaders and have drawn their opposition.

RNC leaders and campaign officials for presumptive nominee Donald Trump have long said they had the votes to turn back the conservatives' proposals -- including efforts by delegates seeking to stop Trump from winning the party's nomination by letting delegates vote freely.

Some delegates said Thursday's talks were aimed at finding a middle-ground that would achieve Trump and RNC leaders' top goal -- a smooth convention next  week without nationally televised pitched battles that would create a damaging image for a party whose likely presidential  candidate  has already proven himself divisive.

The delegates who described Thursday's negotiations spoke on condition of anonymity to describe private talks.

Early Thursday, the convention's rules committee -- made up of 112 delegates from around the country -- began meeting to consider proposed rules changes. But after an initial recess that committee leaders blamed on an equipment "paper jam," committee Chairwoman Enid Mickelsen of Nevada announced a recess until 1 p.m. without mentioned the negotiations.

There's been talk of some Trump foes walking out of the convention if they feel they've been treated unfairly, a spectacle top Republicans would love to avoid.

"Chains, whips, muzzles and tasers," Steve Duprey, an RNC member from New Hampshire, joked about how top Republicans have tried to calm the uprising.

One leading plan by anti-Trump forces is by Kendal Unruh, a Colorado delegate, who would let the 2,472 delegates abandon the candidate they're supposed to support and instead vote their conscience.

No one expects Unruh's proposal to win a majority on the 112-member convention rules committee, which is heavy with top party officials. But Unruh has said she expects to win support from at least 28 of them -- which under party rules means her plan would be brought to the full convention next Monday for a vote.

If it is, it seems likely to lose. But Unruh and her allies can't be completely dismissed because while most delegates are committed to backing Trump in the roll call for the nomination, current rules let every delegate vote however he or she wishes on other fights over rules, the platform and credentials.

"There hasn't been a whole lot of conciliation going on," Unruh said of the disagreement between the two sides.

In another tactic, the dissidents also plan to challenge the roll calls of state delegations when the nominee is chosen later in the week.

And while they'd like to win rules changes that specifically unbind delegates, they also insist the current rules already let them back any candidate -- a reading that RNC general counsel John Ryder derided Wednesday as "idiosyncratic."

One factor working against the Trump opponents is that objecting delegates must be recognized by the convention's presiding officer. Party leaders eager to forestall opponents can at times exercise that power to their benefit by ignoring delegates trying to lodge objections.

Besides letting the delegates vote freely, proposals floating around include closing GOP primaries to independent voters, with whom Trump performed well, or making some changes that would not take effect until after this convention.

Also possible are efforts to change the party's current practice of letting Iowa, New Hampshire, South Carolina and Nevada have the initial nominating contests, with Nevada sometimes considered most vulnerable to losing that preferred status.