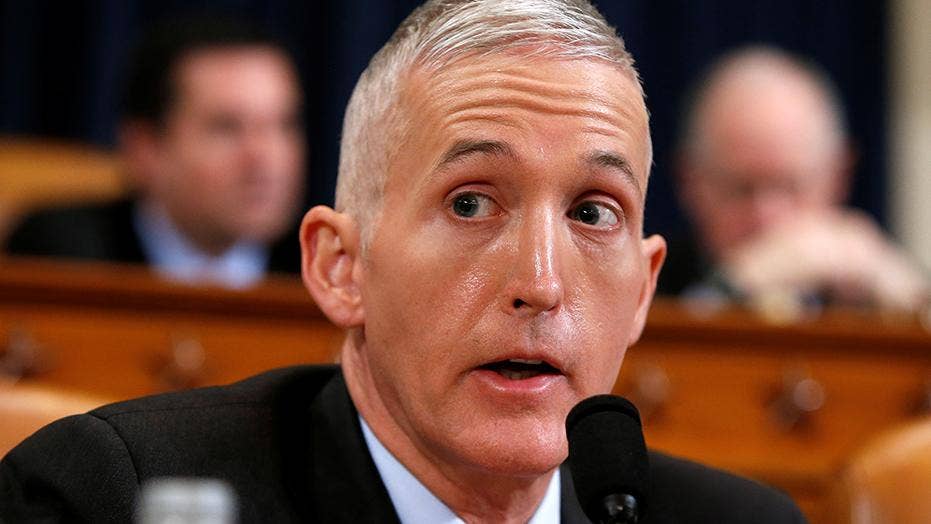 Congressional Republicans are renewing calls for a second special counsel this week, with some suggesting the move may become “unavoidable,” amid new revelations related to the end of the Hillary Clinton email probe and the beginning of the investigation into Russian meddling and potential collusion with Trump campaign associates during the 2016 presidential election.

Over the last year, Justice Department inspector general Michael Horowitz has been conducting a review of the FBI and DOJ’s actions related to the investigation into Clinton’s use of a private email server while she was secretary of state. A final report on the investigation is expected within several months.

But despite Horowitz’s reputation as “a fair guy,” according to House Oversight Committee Chairman Trey Gowdy, R-S.C., GOP lawmakers are leaning toward a second special counsel to find the facts.

“I think we’re trending perhaps towards another special counsel,” Gowdy said on Fox News' “Sunday Morning Futures” with Maria Bartiromo. “I’m reluctant to call for a second special counsel, but I think it might be unavoidable in this fact pattern.”

Gowdy added: “You need an independent arbiter. And the Justice Department cannot investigate itself. Horowitz can, fair guy, but someone else has to do it.” Gowdy noted there were “witnesses outside the reach of the IG.”

Last week, 13 House Republicans, not including Gowdy, penned a letter to Attorney General Jeff Sessions saying the appointment of another special counsel was “of the utmost importance.”

“As you know, evidence has come to light that raises serious concerns about decisions and activities by leadership at the highest levels of the Department of Justice and Federal Bureau of Investigation regarding how and why the Clinton probe ended and how and why the Trump-Russia probe began,” the letter stated, adding “important questions” regarding Foreign Intelligence Surveillance Act warrants.

“We acknowledge with immense gratitude that nearly every single man and woman in the DOJ and FBI conducts themselves daily with integrity, independence, patriotism, objectivity, and commitment to the rule of law,” the letter said. “That is why this Special Counsel is of the utmost importance to ensure that these historic, legendary and necessary agencies move forward more respected and effective than ever before.”

The letter came after Sessions announced Horowitz would investigate allegations of government surveillance abuse, in light of the memos released on Capitol Hill about FBI and DOJ efforts to obtain FISA warrants to surveil former Trump campaign adviser Carter Page.

President Trump blasted Sessions for the move, bringing him back into his political crosshairs, for tapping an “Obama guy” to investigate allegations of government surveillance abuse.

“Why is A.G. Jeff Sessions asking the Inspector General to investigate potentially massive FISA abuse. Will take forever, has no prosecutorial power and already late with reports on Comey etc. Isn’t the I.G. an Obama guy? Why not just Justice Department layers? DISGRACEFUL!” Trump tweeted last week after Sessions’ announcement.

In response to Trump’s tweet, Sessions said his DOJ had “initiated the appropriate process that will ensure complaints against the Department will be fully and fairly acted upon if necessary.”

Sessions added in a statement last week, “As long as I am the Attorney General, I will continue to discharge my duties with integrity and honor, and this Department will continue to do its work in a fair and impartial manner according to the law and Constitution.”

Horowitz is also investigating former FBI Deputy Director Andrew McCabe, and whether he wanted to avoid taking action on new Clinton emails found on disgraced New York Democratic Rep. Anthony Weiner’s laptop, reports said. According to records, McCabe knew about the new emails at the end of September 2016, but chose not to brief former Director James Comey until Oct. 26, 2016 — prompting the re-opening of the Clinton email investigation just one week before the presidential election.

“We have called for a second special counsel — even though I don’t like special counsels — I see no other way to get answers to those key questions,” Rep. Jim Jordan, R-Ohio, said on Fox News' “Your World” on Monday. “I don’t like them but I don’t see any other remedy.”

Jordan said that “the FBI can’t investigate themselves,” and suggested appointing “some retired federal judge” to the potential post.

“Don’t pick someone from the swamp,” Jordan said. “Let that individual put out a team and get answers to these questions that we all want to know [the answers to].”

Sessions has been heading calls for a second special counsel since last summer. Only in November 2017 did he seem to consider the option, when he “directed senior federal prosecutors to evaluate certain issues” related to the Clinton Foundation and the sale of Uranium One.

Rep. Matt Gaetz, R-Fla., who signed on to the letter for a second special counsel last week, blasted Sessions for not taking action.

On “Outnumbered Overtime” Monday, Gaetz said: “If Jeff Sessions doesn’t want to do the job of attorney general, he should step aside and we should get someone who wants to do that job.”