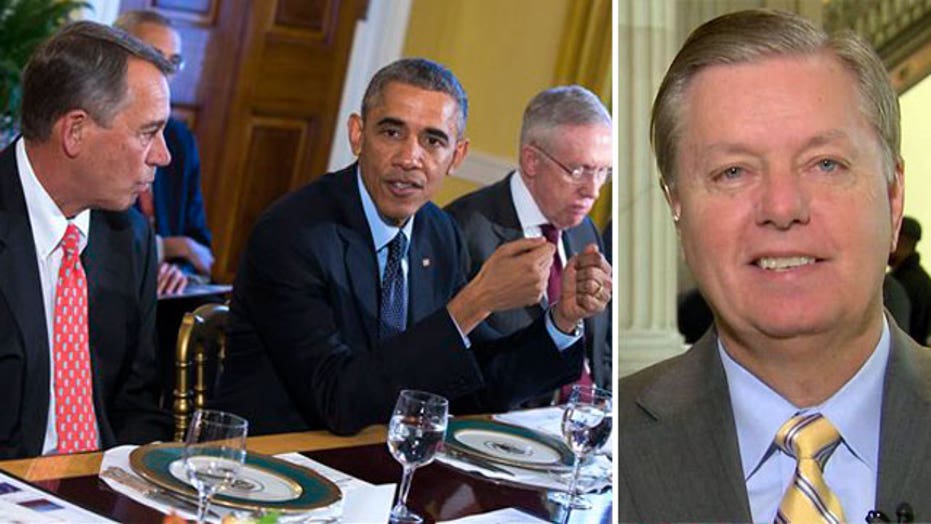 Obama on Thursday announced that he would suspend deportation for roughly 5 million illegal immigrants, garnering support from much of his base and outrage from critics -- including two elected officials who are mounting separate legal challenges to the president’s executive actions.

Cruz  told “Fox News Sunday” that Obama refuses to accept that only Congress has the authority to establish federal immigration laws and that members should block the president’s nominees and some funding until he rescinds his executive actions.

“This is a stunning and sad display by the president,” Cruz said. “We need to impose real consequence.”

He was joined on the show by Greg Abbott, the governor-elect of Texas, which borders Mexico and deals with many illegal immigration issues.

Abbott, the state’s attorney general, intends to sue, arguing the executive actions create the same financial hardships for Texas as those in 2012 that now shield from deportation more than 1 million young people brought to the United States illegally through no fault of their own.

“We think we have standing better than any other state to be able to assert this claim against the president,” Abbott told Fox. “We have a president who feels completely unrestrained by the Constitution of America.”

California Democratic Rep. Xavier Becerra on Sunday defended Obama’s executive orders, saying they are no different than what Presidents Reagan and Bush Sr. did.

“He cannot change a law,” Becerra told Fox. “He can only secure them. The Supreme Court as recently as two years ago said the president has broad discretion to execute the laws.”

New Jersey Democratic Sen. Robert Menendez told NBC’s “Meet the Press” that he was “absolutely” sure the executive actions will pass constitutional muster.

“As a result of the president's actions more felons will be deported, more border patrol would be at the southern border, more people will pay taxes and more families will be able to stay together,” he added. “I think those are the goals that are worthy of being achieved.

Cruz also suggested, as he has since Obama announced the executive action, that Congress should take action next year when Republicans, who already control the House, will also have the majority in the Senate.

He said Congress, which confirms or votes down presidential nominees for judgeships and top administrative posts, should block all of Obama’s judicial and executive nominations for two years, except for those of “vital, national” importance.

The outspoken, first-term senator would not directly say whether Congress should try to block the nomination of Loretta Lynch, Obama’s pick to be the next U.S. attorney general.