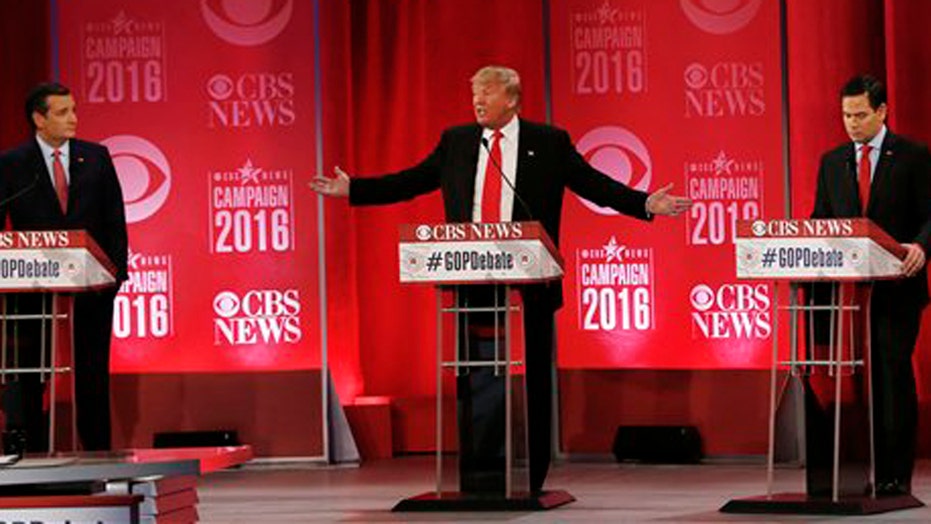 Republican presidential candidates on Sunday put the final stamp on the arguments made in the previous night’s rancorous, “demolition derby” style debate that included accusations of lying and heated exchanges over 9/11, Supreme Court nominations and immigration.

“For a number of weeks, Ted Cruz has just been telling lies,” Florida Sen. Marco Rubio told “Fox News Sunday.” “He lied about Ben Carson in Iowa. He lies about Planned Parenthood, he lies about marriage. He's lying about all sorts of things, and now he makes things up.”

Rubio’s comments were similar to those he made in the debate about Cruz, a Texas Republican senator, who noticeably went on the attack ahead of winning the Iowa GOP Caucus earlier this month.

Cruz on Saturday night repeated his argument that Rubio backed a bipartisan Senate effort on immigration reform that was tantamount to offering illegal immigrants a path to citizenship.

Rubio has repeatedly said he abandoned the plan after it was blocked by the House but that it never offered citizenship.

Donald Trump, who leads the GOP field in national polls, is also trying to portray Cruz as dishonest. He argued Saturday and again Sunday that Cruz intentionally misled some Iowa caucus-goers with a mailer and about whether fellow GOP candidate Ben Carson was still in the race.

On Saturday, he called Cruz the “single biggest liar” in the 2016 GOP field.

“No matter how you figure it,” he told ABC “This Week.” "He's a nasty guy. What he did to Ben Carson was disgraceful.”

Cruz, meanwhile, has tried to portray Trump as a liberal who, if elected, will take away Americans’ guns rights under the Second Amendment.

Cruz has also called Trump part of the “fevered swamps of the Left” for suggesting President George W. Bush should have been impeached for entering the Iraq War.

Trump on Sunday acknowledged making the remark in 2008 and suggested Bush indeed should have been held responsible for getting the United States “into war with lies.”

"It's past time,” Trump said, trying to end the conversation. “He made a horrible mistake. … His was about as big a mistake as you can think of.”

His exchange followed one in the debate with fellow GOP candidate Jeb Bush, a former Florida governor and George W. Bush’s brother.

Bush, who has at times appeared to struggle with whether to run on his family’s political history, said in the debate that while Trump was “building a reality TV show my brother was building a security apparatus to keep us safe and I'm proud of what he did."

Trump responded: "The World Trade Center came down during your brother's reign.”

Bush was not the only former president being accused Saturday by a GOP candidate of making decisions that led to the 9/11 attacks in which terrorists killed nearly 3,000 people on U.S. soil.

Rubio said the World Trade Center came down “because Bill Clinton didn’t kill Usama bin Laden when he had the chance.”

Rubio told NBC’s “Meet the Press” that he didn’t blame Clinton for the attacks, only for not trying to kill bin Laden, which allowed his Al Qaeda terror group to grow and carry out the attacks on hijacked jetliners.

GOP candidate Ohio Gov. John Kasich told ABC the debate was “like a demolition derby, but the good news is my car's still going around the circuit.”

Kasich also said he would pick a conservative to replace Supreme Court Associate Justice Antonin Scalia, whose death was announced just hours before the debate, which sparked strong arguments by the candidates about how and who should replace the conservative justice.

Kasich also told ABC he would “look for a conservative, somebody who doesn't make law, but somebody who will interpret the law.”

He also seemed resigned to the reality that President Obama, in his final months of office, will try to appoint a replacement and that Congress will attempt to block or stall the process until a new president takes office in January.