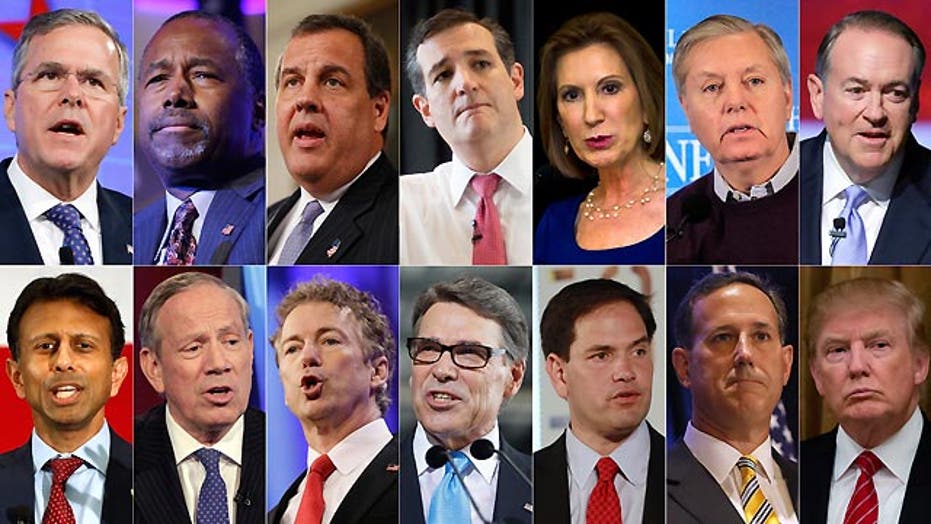 Less than a week before a bushel of 2016 Republican presidential hopefuls square off for the first time in two Fox News debates, billionaire businessman Donald Trump is holding firm to his primary lead -- while his lower-polling rivals battle for visibility in hopes of making the cut for the prime-time stage.

Trump, seemingly reveling in his role as instigator and bipartisan punching bag, opened up a 7-point lead over the rest of the field in the most recent national poll. Wisconsin Gov. Scott Walker and former Florida Gov. Jeb Bush also are polling consistently well.

Rather, the 11th-hour dash is among those in the middle and back of the pack, competing for the last of 10 slots in the prime-time event at Cleveland's Quicken Loans Arena.

The Aug. 6 debate is hosted by Fox News, in conjunction with Facebook and the Ohio Republican Party.

The 9 p.m. ET stage will be open to the top 10 candidates in recent national polls. With 17 total candidates now in the race – former Virginia Gov. Jim Gilmore was the latest, announcing his bid Thursday – not everyone will make the cut.

Those who don’t can qualify for an earlier debate, at 5 p.m. Fox News has eased the criteria for that debate, and candidates will no longer have to reach at least 1 percent in the polls to make the stage, though there are other criteria.

The only Fair & Balanced App ™ that gives you the Power to Decide! Download the Fox News Election HQ 2016 app for iPhone or Android phone.

But there is heavy competition for the main event, the first time leading candidates will face off after seemingly weekly campaign kick-offs.

“There’s too many, and so there is going to be a culling of the herd,” said Mark Jones, political science fellow at the Baker Institute at Houston’s Rice University.

With national poll placement dictating who gets prime-time, the candidates on the margin are doing their best to boost their visibility, including New Jersey Gov. Chris Christie and Texas Gov. Rick Perry.

Perry challenged poll-leader Trump to a pull-up contest after a week of pummeling the billionaire real estate tycoon for his comments on Mexican illegal immigrants and Sen. John McCain.

Meanwhile, Christie declared war on marijuana this week, promising Coloradans they had better enjoy legalized pot today because he will enforce federal laws against it when he is in the White House.

Speaking with Fox News on Thursday, the Garden State guv said "we're very confident we'll be at the 9:00 debate."

After spending the last several months going after Bush – now third in the RealClearPolitics poll average, behind Walker – Christie is competing these days more with Ohio Gov. John Kasich. Christie clocked in at 3 percent in the same RCP average, right behind Kasich, putting them on the tail end of the top 10.

Potentially outside the margin, but fighting to get in, are Perry, Louisiana Gov. Bobby Jindal, ex-Hewlett Packard CEO Carly Fiorina and former Pennsylvania Sen. Rick Santorum.

Former New York Gov. George Pataki and South Carolina Sen. Lindsey Graham are further behind. Each, though, has been trying to take on Trump in recent weeks, with the latter putting out a viral video of himself destroying a cell phone – a response to Trump giving out his number during the McCain flap (Graham had lashed out at Trump for questioning his friend McCain’s heroism, triggering Trump’s ire).

“I think the top eight candidates are comfortable where they are,” said Jones. “[The others] are pushing the envelope with the goal of rising above the dust that was created when you have 17 candidates running.”

Not making the prime-time cut isn’t the end of the road by any means, and there’s still plenty of time before the Iowa caucuses.

“I don’t think being left out of the debate is a death knell,” said Steve Deace, who hosts a conservative radio talk show in the Hawkeye State. However, he said, “it can hurt from a momentum standpoint, in that it is a spotlight you are not getting.”

“It will be a huge spotlight and I think for someone who is underfunded and under-organized who is impressive when they are in front of people, like Bobby Jindal, this is the spotlight they are going to need.”

Perhaps an indication of how comfortable the GOP front-runner feels right now, Trump is in Scotland and attended the Women's British Open at one of his resorts – though he still talked campaign shop with reporters Thursday.

Bush, though, is back on the stump stateside on Friday, with plans to address the National Urban League, along with retired neurosurgeon Ben Carson. Walker and Christie are campaigning in Iowa Friday, as is Kentucky Sen. Rand Paul. Kasich is in New Hampshire.

For all the buzz and attention surrounding Trump, there is now pressure on him to perform.

“He is clearly the man of the hour from a buzz standpoint,” Deace said. “I think with one or two exceptions, the goal of the others is to get him to go from zany to crazy, to self-immolate.”

But that might be difficult, considering he’s weathered a string of controversies over his blunt remarks since entering the race. The worst thing that can happen is for Trump to pull his punches and wimp out, Deace said. “His entire campaign is based on him being a blunt instrument he can get back at Washington with. If he dulls those edges, that would be the death knell for him.”

Deace said the others, though, have something to gain by not going for the bait.

“It will be interesting to see how Scott Walker performs in this environment. I think we have to see if this [debate] diminishes his stature or he is able to craft an everyman persona who is a nice contrast to the bigger personalities,” he said. On the other hand, “I think Ben Carson has a much more reserved, laid-back way of communicating than the rest of these candidates. Will he bore people, or be seen as the adult in the room?”