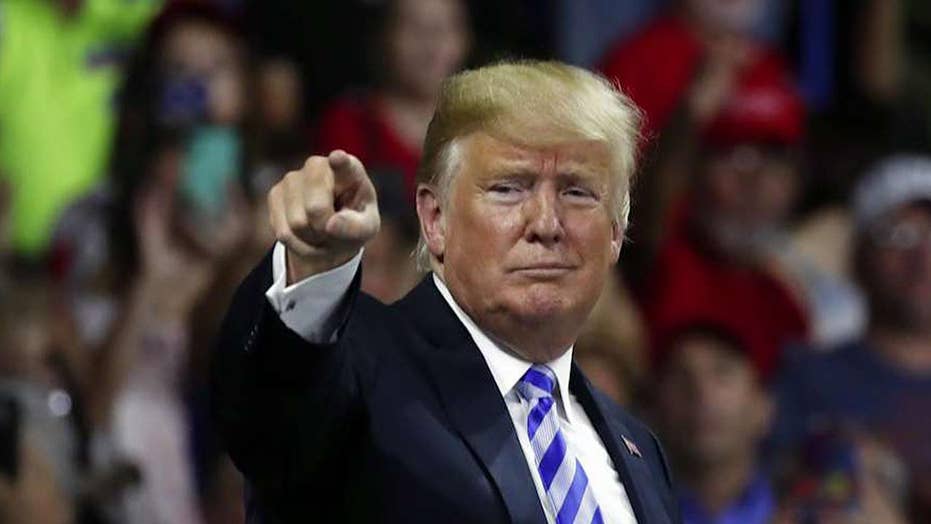 Trump warns the markets would crash if he were ever impeached; 'Fox News @ Night' political panel weighs in.

Investigations into his tax returns, his payments to Stormy Daniels and his relationship with Russia.

That’s what President Trump will almost assuredly face if Democrats win back the House -- and the much-coveted power to subpoena and launch congressional investigations.

Democrats need to flip 23 seats to take back control and give Nancy Pelosi another crack at wielding the gavel, and the party of the sitting president typically loses seats in the first post-inauguration midterms.

The anti-Trump 'resistance' already is preparing for robust political payback, should Democrats succeed.

“Another reason the Midterm elections matter — if Democrats take back the House they will have the power to launch investigations, subpoena witnesses, and hold public hearings on all of Trump’s criminal activity,” Nate Lerner, the executive director of the liberal campaign group Build the Wave, tweeted Monday.

Capitol Hill Republicans, meanwhile, are circulating a long list of issues they believe Democrats could investigate should they win the House, Axios reported over the weekend.

The list, which documents information requests already made by the minority party, predicts Democrats could launch investigations into Trump’s family business, Trump’s firing of FBI director James Comey, the personal email use of White House staff and White House security clearances, among many other issues.

“Everything gets investigated,” former Republican House Oversight Committee chairman Tom Davis recently told the Washington Post. “You spend half your time answering subpoenas, digging up documents and having your people appear before these committees.”

“It is a road map to the full weaponization of government,” former Republican congressional candidate Dan Bongino said Monday on “Fox & Friends.” “And frankly, it's one of the most frightening things I have seen in a very long time.”

But there’s precedent to the opposition party winning back control of the House -- mostly recently in 2010, when Republicans rode the Tea Party wave to a House majority -- and becoming a major thorn in the side of the president.

TRUMP SAYS MARKET WOULD CRASH IF DEMS IMPEACHED HIM

It’s possible Democrats will also move to impeach Trump should they win back control – an effort already embraced by some left-wing lawmakers. Top House Democrats have largely pushed back on calls to pursue that option, though some have kept the door open.

But the speculation over a possible impeachment effort ramped up again last week following the plea deal struck by Trump’s former attorney Michael Cohen, who claims the president was involved in hush-money payments and admitted campaign finance violations related to them.

The president himself, in an interview on Fox News last week, dismissed talk of impeachment, saying, “I don’t know how you can impeach somebody who’s done a great job” while warning of economic consequences.

“If I ever got impeached, I think the market would crash, I think everybody would be very poor, because without this thinking, you would see — you would see numbers that you wouldn’t believe in reverse,” Trump said.