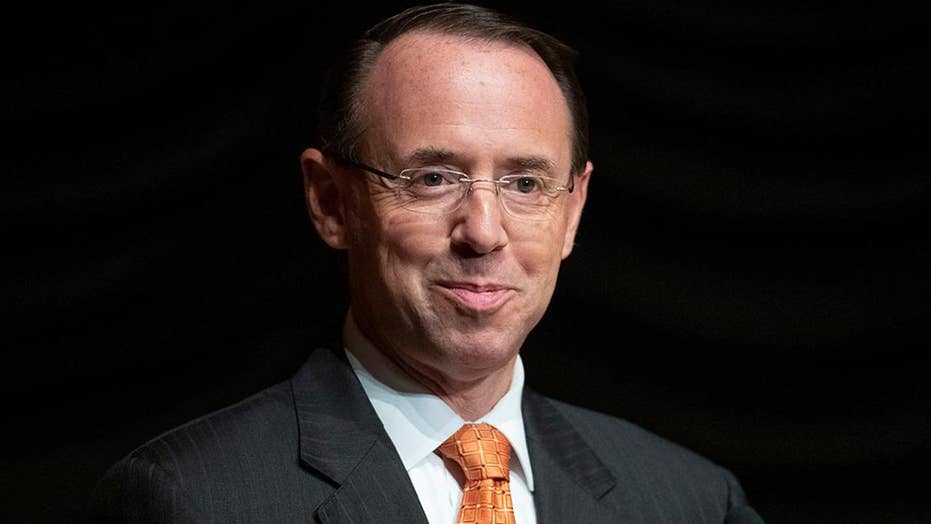 Lawmakers have sought to bring Rosenstein in over reports he suggested secretly recording President Trump and once broached the idea of invoking the 25th Amendment to remove him from office last year. Rosenstein has denied the reports.

Asked if the Rosenstein interview will happen before the new Congress is sworn in next year, Goodlatte, R-Va., said, “In my opinion yes, but we'll have to see.”

“We need to have a lengthy period of time where he is asked questions under oath,” Goodlatte said.

Goodlatte said investigators are exploring whether there was an effort within the FBI and Justice Department to push back or blunt the Trump administration after then-FBI Director James Comey was fired in May 2017.

Two hours after Comey's termination became public on May 9, 2016, FBI figures Peter Strzok and Lisa Page discussed whether to open a "case" in a "formal chargeable way." Investigators question whether the collusion case against Trump had already pivoted to an obstruction case by May 17. Page later testified in closed session that the FBI had no evidence of collusion when Rosenstein appointed Special Counsel Robert Mueller.

“That's a very good question and we won't know the answer to that until we have completed our interviews. However, we need to ask those very questions in order to complete the investigation,” Goodlatte said.

Lawmakers have described the interview as Rosenstein’s opportunity to tell his side of the story and set the record straight under oath. Goodlatte said the committee is “working with a number of people” to make the interview happen.

“We think that he needs to testify on the record regarding that,” Goodlatte said Wednesday.

He added, “We think that he should come voluntarily and have a transcribed interview and under conditions where we don't have leaks.”

Goodlatte, speaking broadly about the Russia investigation, said he believes the probe began earlier than most people assume, saying it may have started before Trump was even the Republican nominee for president in 2016. Comey testified that the FBI's Russia counterintelligence case opened in late July 2016.

“I think it began in the spring, exact dates are still of interest to us, but in the spring of 2016 before Donald Trump was even the presidential nominee of the Republican Party,” Goodlatte said.

The New York Times first reported the details of the alleged discussions between Rosenstein and senior FBI officials in May 2017, one day before Rosenstein appointed Mueller to oversee the Russia investigation.

After the allegations surfaced, Fox News reported on Sept. 22, based on a source who was in the meeting, that Rosenstein's "wire" comments were viewed as "sarcastic."

Rosenstein also released a statement saying, "I never pursued or authorized recording the President and any suggestion that I have ever advocated for the removal of the President is absolutely false."

But former FBI General Counsel James A. Baker told congressional investigators during a closed-door deposition in October that two senior FBI officials at the time told him they believed Rosenstein was “serious.”

The report triggered new tensions between the White House and DOJ, where Rosenstein oversees the Mueller-led probe.

It comes as Trump's legal team is finalizing answers to written questions from Mueller, and could submit them as soon as the end of this week, two sources familiar with the matter told Fox News on Tuesday.

The answers concern questions about whether the Trump campaign colluded with Russian officials during the 2016 presidential campaign. The president has repeatedly denied any such collusion with Moscow.