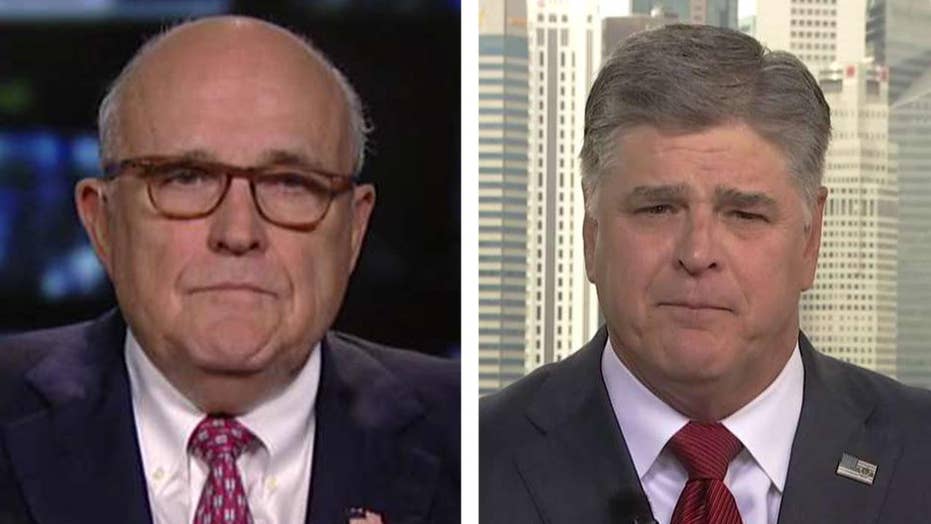 Rudy Giuliani, attorney for President Trump, speaks out on 'Hannity' after the release of DOJ inspector general report on the FBI's handling of the Clinton email investigation.

Rudy Giuliani, President Trump’s personal lawyer, called Thursday for the suspension of Special Counsel Robert Mueller’s probe into alleged collusion between the Trump campaign and Russia in light of the release of a watchdog report that criticized key figures in the Hillary Clinton email probe.

Giuliani, who appeared on Fox News’ "Hannity," said the U.S. Department of Justice should dismiss all those in the “phony Trump investigation” and bring in FBI agents from the New York office to probe former FBI Director James Comey, special counsel Lisa Page and FBI Deputy Assistant Director Peter Strzok.

"I believe that (Deputy Attorney General) Rod Rosenstein and Jeff Sessions have a chance to redeem themselves and that chance comes about tomorrow," he said. “It doesn’t go beyond tomorrow.”

Trump has been warned by both Republicans and Democrats about potential ramifications for firing Mueller or Rosenstein. Politico reported that Sen. Chuck Schumer, D-N.Y., said in April that the firings would likely lead to calls for a Trump impeachment.

The nearly 600-page report, which was compiled by DOJ Inspector General Michael Horowitz, was released Thursday and was critical of Comey’s handling of the Clinton email investigation. The report did not second-guess Comey's conclusion that Clinton should not have been prosecuted.

The watchdog’s report outlined new information concerning apparent bias at the FBI and DOJ that he says undermines the public trust in each agency. 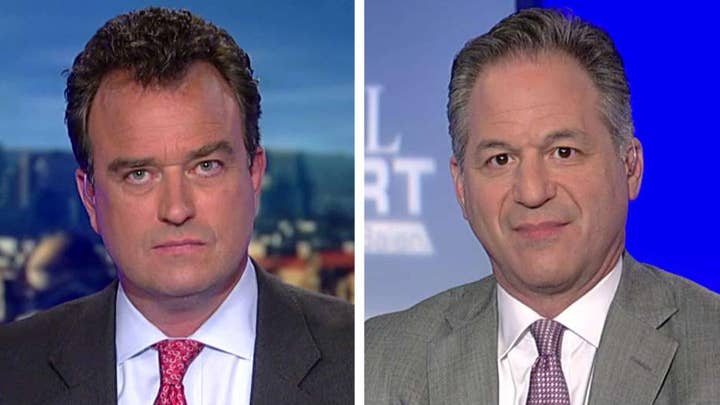 FBI lovers Strzok and Page were involved in the Clinton email probe and an FBI inquiry into the election. They sent anti-Trump text messages, including one dated Aug. 8, 2016, where Page asked Strzok, “[Trump’s] not ever going to be president, right?  Right?!” and Strzok responded, ,”No. No he won’t. We’ll stop it.”

Strzok was later dropped from Mueller’s team. Page has since retired.

"Tomorrow, Mueller should be suspended and honest people should be brought in, impartial people to investigate these people like Strzok," Giuliani said. "Strzok should be in jail by the end of next week."

The watchdog identified five other unnamed individuals, including two agents and one FBI attorney who worked on the Russia probe until earlier this year, who made "statements of hostility toward then-candidate Trump and statements of support for candidate Clinton," and improperly mixed "political opinions" with case-related discussions.

According to the report, one FBI attorney who was later assigned to Mueller's Russia probe until earlier this year messaged another colleague “Viva le resistance” after Trump's election. The attorney acknowleged the message could create the "perception" of bias.

The IG report noted that it was unable to connect the officials' apparent political bias to specific investigative decisions. Nevertheless, the IG referred the five FBI officials for further investigation.

White House press secretary Sarah Sanders said the report "reaffirmed the president's suspicions about Comey's conduct and the political bias amongst some of the members of the FBI."

Giuliani, who said he was speaking for himself and not the president, said Sessions should step up and “save his department.”