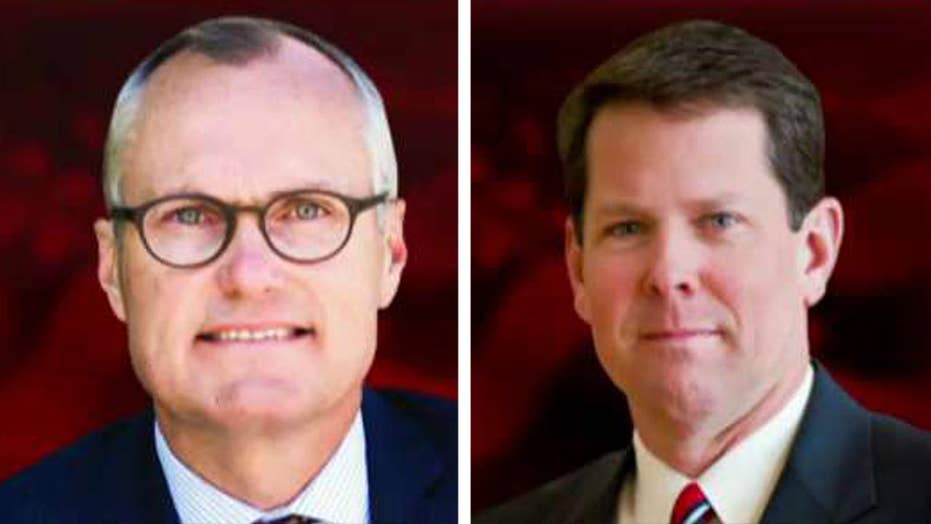 Casey Cagle to face off against Brian Kemp in July; Jonathan Serrie reports from Gainesville, Georgia.

Georgia Lt. Gov. Casey Cagle and Secretary of State Brian Kemp advanced to a July runoff vote Tuesday night in the state's GOP race for governor, after grueling campaigns that saw the candidates battling over who carried the most social conservative credentials.

After failing to receive 50 percent of the vote, Cagle and Kemp are set to compete in what analysts say is likely to be both an expensive and nasty campaign.

Throughout the campaign, the GOP candidates touted their conservative credentials with campaign ads that were seen as both humorous and controversial.

In one ad, Kemp pointed a shotgun in the direction of a teenage boy interested in dating one of his daughters. And Williams earned both praise and protests after branding his campaign bus as a “deportation bus.”

Back in February, Cagle made headlines after he threatened to kill a tax break for Georgia’s largest employer, Delta, in retaliation for the airline’s decision to sever ties with the NRA.

Nevertheless, it was Cagle and Kemp who stood out.

Although the winning candidate should be favorite in the fall, some Georgia Republicans are concerned that a nasty runoff could harm the party come November.

Deal, the current governor, is a pro-business Republican who won friends across the aisle with his prison-reform initiatives and his veto of a 2016 “religious liberty” bill that would have allowed faith-based organizations to deny employment or services to those who violate their religious beliefs, including gays and lesbians.

Stacey Abrams won the Democratic primary on Tuesday, making her the first woman gubernatorial nominee in Georgia from either major party.

Georgia Democratic gubernatorial nominee Stacey Abrams participates in a debate with Stacey Evans as a stage manager holds up a time card Sunday, May 20, 2018, in Atlanta. (AP)

Both Abrams and Stacey Evans ran as former state lawmakers and attorneys who seemed to align themselves on policy but shredded each other's legislative and legal careers. Both candidates also had differing views as to how the party could flip the state.

Abrams, 44, argued that Democrats could turn the GOP-run state only by expanding the electorate and attracting younger and nonwhite voters to the Democratic column. Evans, 40, however, felt that liberal policies could be pitched to all voters, even including white Georgians who have abandoned Democrats in recent decades.

If Abrams were to win later this year, she would be the first black female governor in any state.