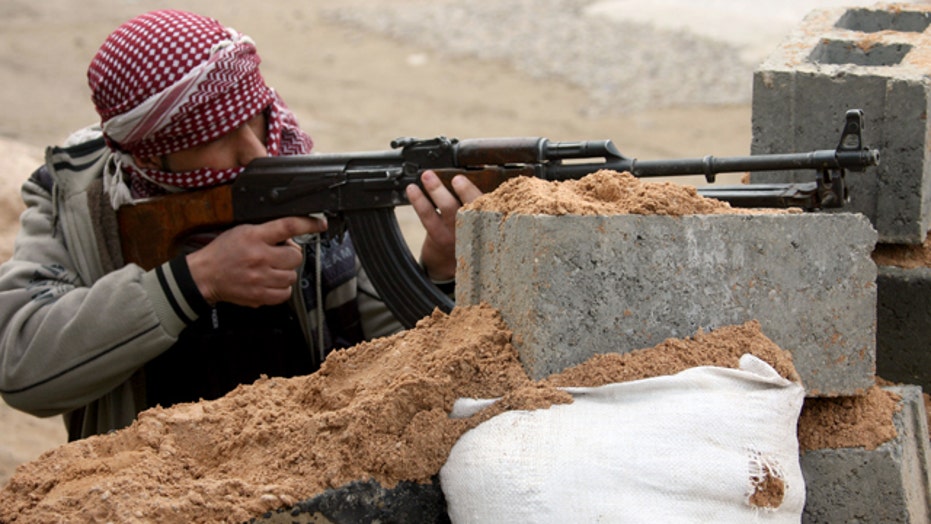 A new wave of violence is surging across the Middle East, engulfing at least three nations and involving hundreds of groups whose competing interests and loyalties have complicated U.S. efforts to gain any control over the situation.

Syria, Iraq and Lebanon seemingly have turned into an arc of unrest in recent weeks. In Iraq, following a year in which attacks intensified, Al Qaeda-allied fighters took over key territories including Fallujah over the weekend.

On Sunday, Secretary of State John Kerry painted a dire picture of what's at stake.

"This is a fight that is bigger than just Iraq," Kerry said. "... the rise of these terrorists in the region and particularly in Syria and through the fighting in Syria is part of what is unleashing this instability in the rest of the region."

The U.S. and other nations are slated to hold another round of peace talks on Syria later this month. As for Iraq, Kerry pledged U.S. help, but ruled out boots on the ground and made clear: "This is a fight that belongs to the Iraqis."

But the battlefield has grown so vast and so complicated that it's starting to resemble the chaos of the long-lasting Lebanese Civil War. The factions involved range from the governments of these countries to Al Qaeda-allied fighters to ragtag militias.

Kerry tried to focus attention in his remarks on the group that arguably is sowing the most chaos in the region: The Islamic State of Iraq and the Levant (ISIS). The group sprouted from Al Qaeda in Iraq and is now one of the major jihadist networks in both Iraq and Syria.

ISIS was behind the attacks on Ramadi and Fallujah, and Kerry called them -- along with Al Qaeda itself -- the "most dangerous players in that region."

ISIS is now fighting on several fronts. Aside from its recent advances in Iraq, the group is now battling Syrian opposition groups in northern Syria. The group has also claimed responsibility for a bombing last week in Beirut.

If true, the Beirut bombing would mark an encroachment by the Sunni Muslim group on Hezbollah-controlled territory -- further complicating the intertwining feuds playing out across the region. Hezbollah is the Shiite Muslim terror group backed by Iran, which is also involved in Syria.

In Syria, dozens of groups are now on the battlefield. And the rise of ISIS and like-minded fighters poses a threat to the primary coalition that the U.S. and other western nations have tried to work with.

That group, the Free Syrian Army, was formed in 2011 by defectors from the Syrian government. It is allied with the Syrian National Coalition.

Also at the forefront of fighting in Syria is a newly formed alliance of Islamist groups that call themselves the Islamic Front. It is now considered the largest rebel alliance in Syria -- and its fighters are among those battling ISIS in northern Syria now.

In between those major players are scores of smaller groups, each with their own agenda and supporters.

One notable group is the jihadist Al-Nusra Front, which the U.S. considers a terror group and is allied with Al Qaeda. Another is Ahrar al-Sham. According to The Washington Post, ISIS fueled the fighting last week after it released the battered body of an al-Sham commander.

Amid the melee of warring factions are the governments of Lebanon, Iraq and Syria.

However, Carney said the U.S. will accelerate military shipments to Iraq and is looking to provide an additional Hellfire missile delivery "as early as this spring." Plus he said the U.S. will be providing dozens of surveillance drones in the weeks and months ahead.

In Syria, practically all groups save for those backed by Iran are fighting to oust Bashar Assad from power.

The Shiite-led government in Iraq is not facing anywhere near the popular uprising seen in Syria. But analysts say Baghdad has inflamed the situation by pursuing unfair policies against the Sunni minority population, and then aggressively breaking up Sunni Muslim protests.

Groups like ISIS, analysts say, have exploited this tension. Kenneth Pollack, senior fellow with The Brookings Institution, explained to a congressional committee last month that some Sunnis decided to "discretely reach out to their old terrorist friends again."