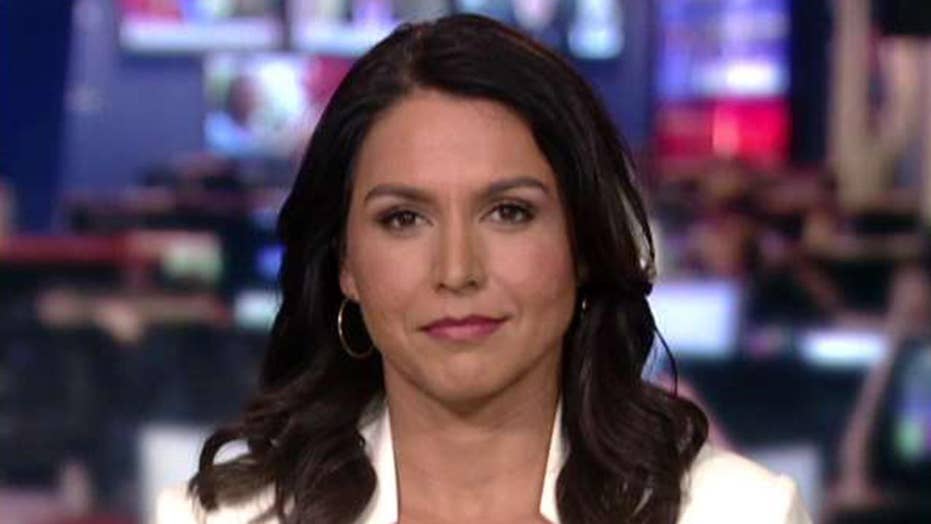 Gabbard: War should always be a last resort

Rep. Tulsi Gabbard accused Sen. Kamala Harris of “lies and smears and innuendos" during a fiery exchange at Wednesday night’s Democratic presidential primary debate, saying a Harris presidency would be more of the “status quo.”

The tense moment began when Gabbard, D-Hawaii, was asked about her attack last month on Hillary Clinton -- the former secretary of state had suggested in an interview that Gabbard was a “favorite of the Russians."

She added, “And puts it in the hands of veterans and fellow Americans who are calling for an end to the Bush-Clinton-Trump foreign policy doctrine.”

Harris, D-Calif., chiming in, blasted Gabbard for spending years during the Obama administration criticizing his presidency.

“You spent four years, full time, on Fox News criticizing President Obama,” Harris fired back, adding that she has spent “the course of this campaign criticizing the Democratic Party.”

“What Senator Harris is doing, is, unfortunately, continuing to traffic in lies and smears and innuendos because she cannot challenge the substance of the argument that I’m making,” Gabbard said. “Which makes me guess that she will, as president, continue with the status quo.”

Harris had the last word in the intense exchange, saying she believes “that what our nation needs right now is a nominee who can speak to all people,” and “someone who has the ability to unify the country and win the election.”

Wednesday night was not the first time Gabbard and Harris have sparred on the campaign trail.

During the Democratic primary debate in July, Gabbard attacked Harris over her prosecutorial record while serving as attorney general in California, and over her health care plan.