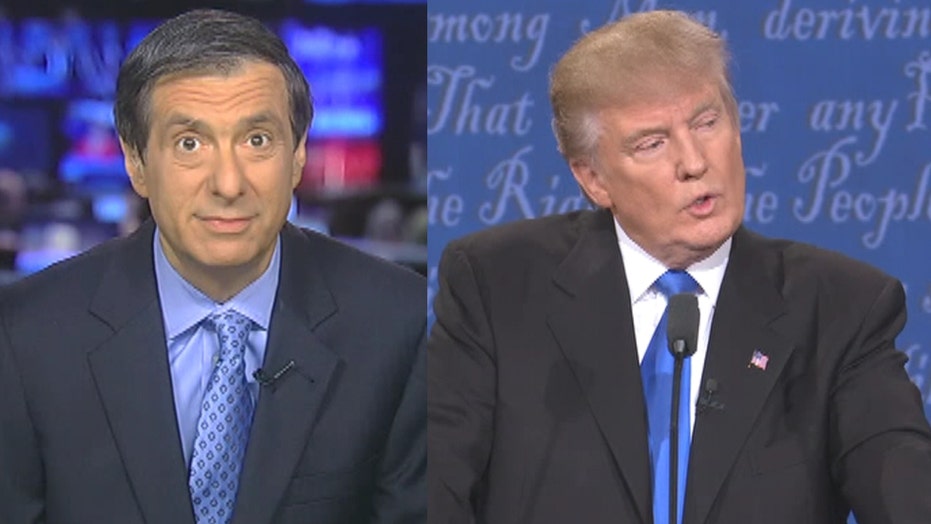 Kurtz: When campaign aides vent to the press

Donald Trump believes he won the first presidential debate. He’s proclaimed that publicly and told me so himself.

Some of his advisers disagree, and they believe his debate prep was something of a disaster.

One well-placed source told me that there were too many people in the room during these sessions, as many as a dozen at a time, and some, including two generals, had no experience with debates or even campaigns. The result was that the candidate got lots of conflicting advice on what to say and do from a team that hadn’t even agreed internally on the best strategies.

The result, in this source’s view, is that Trump was overprepared, which left him without a clear plan to deliver his message or respond to Hillary Clinton’s jibes.

A harsher indictment was delivered to the New York Times, one in which Trump advisers attempted to blame the boss.

It’s striking that they would criticize their candidate from behind a curtain of anonymity. In effect, they’re saying, hey, don’t blame us, we tried to tell him but he wouldn’t listen.

Or viewed another way, they are using the press to send him a message that he needs to change his approach for the second debate in St. Louis.

Now much of this is inside baseball. Hillary Clinton is widely credited, even by many conservative commentators, as having delivered a strong performance at Hofstra and kept her opponent on the defensive. She will probably get a polling bump of a couple of points. But Trump’s supporters remain in in his corner after watching him go toe-to-toe with a former secretary of State without committing a major gaffe.

When campaigns are in a tailspin, loyalty sometimes melts as its consultants and strategists scramble to salvage their own reputations at the boss’ expense. But Trump, against all the odds set by the pundits, is in an extremely competitive race against Clinton and could win the thing.

Here’s what the Times reported yesterday:

“Campaign advisers to Donald J. Trump, concerned that his focus and objectives had dissolved during the first presidential debate on Monday, plan to more rigorously prepare him for his next face-off”—but that “whether he is open to practicing meticulously is a major concern.”

Yes, that is the sound of some folks throwing the nominee under the bus.

These unnamed sources “were privately awash in second-guessing about why he stopped attacking Mrs. Clinton on trade and character issues and instead grew erratic, impatient and subdued as the night went on. In interviews, seven campaign aides and advisers, most of whom sought anonymity to speak candidly, expressed frustration and discouragement over their candidate’s performance.”

The Gang of Seven is clearly ticked off.

The last time this kind of internal carping hit the press, during the “let Trump be Trump” debate, Paul Manafort was gone and Steve Bannon and Kellyanne Conway were tapped to run the show.

Trump’s fans are angry at the media coverage portraying him as having lost the debate, at least according to my Twitter feed. And who knows? It’s not like the press hasn’t been repeatedly wrong about Trump.

But a story in which some of Trump’s own advisers are anonymously quoted as saying he was “erratic” in a debate watched by 84 million people doesn’t help the cause. Even if the Times reporters sought out these sources, you don’t usually see Hillary advisers anonymously griping about their candidate.

Even successful campaigns go through near-death experiences. Clinton was sliding in the polls through her pneumonia period and Democrats were starting to panic. In the end, the burden is on Trump himself, and not his inner circle, to find a way to win.

--Howard Dean standing by his ludicrous suggestion that Donald Trump might have a coke problem makes me want to ... scream. It’s outrageous for a doctor, ex-governor and former presidential candidate and party chairman to act like a smear merchant. Kudos to MSNBC’s Joe Scarborough for calling on his colleague to apologize.

--A former Chris Christie ally, David Wildstein, has testified that the governor laughed when he told him the George Washington Bridge lanes were being closed as an act of political retaliation. I don’t know if that’s true, and the former presidential candidate has denied it, but imagine if Trump had chosen Christie as his running mate.