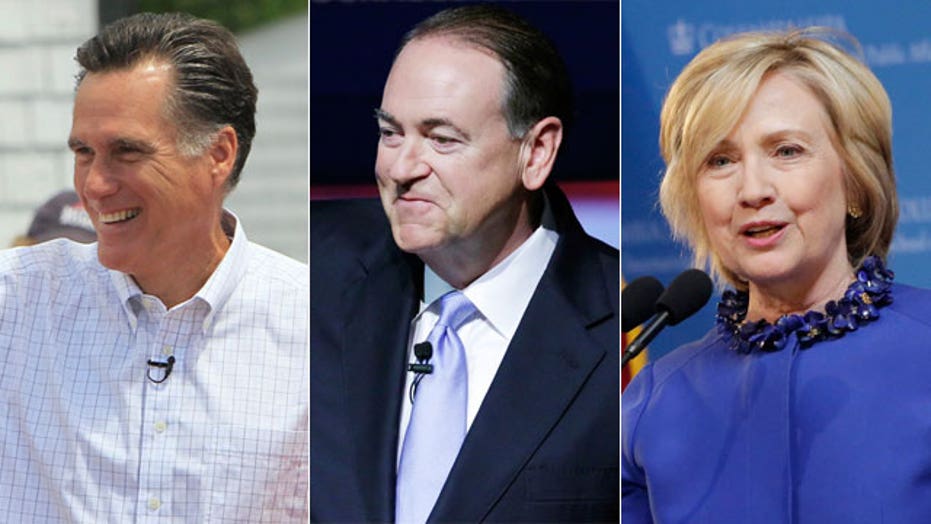 Mike Huckabee, who jumped into the presidential race yesterday, apparently has some new baggage:

He’s made a lot of money.

That, at least, is the premise of a Politico story on the former Arkansas governor, headlined “The Populist 1 Percenter.”

This comes a day after Bill Clinton, defending his practice of making $500,000 speeches while his wife is running for his old job, told NBC: “I gotta pay our bills.”

It’s striking that these two men from Hope, both of whom come from modest backgrounds, are facing questions about their late-in-life wealth. And Bill’s remark, while defending his family foundation, was all too reminiscent of Hillary declaring that they were “dead broke” when they left the White House.

Much of the media take a wary view of rich politicians, questioning whether they are out of touch with the middle class. And while that’s a fair question, it’s not always evenly applied.

Huckabee said in yesterday’s speech that his dad, a fireman, “and my mother didn’t have a whole lot.” That he used a radio job to pay his way through school. That he doesn’t have a family foundation. That he gave up his income to run for president. That “I grew up blue collar, not blue blood.”

He’s been very open about how he finally got to earn some big bucks at Fox News after a decade running Arkansas, and that this was a factor in his decision on seeking the presidency both in the 2012 cycle and this year. But Politico puts it this way:

“Now, after hosting his own Fox News show and a syndicated radio program, while authoring several books, the former governor is solidly – and, some would say, ostentatiously — a part of the one percent…

“Huckabee knows he must reassure his former supporters that he has not changed even as his pockets grew much, much deeper. His announcement, to be made in the small town of Hope where he grew up poor, reflects a broader effort by his campaign to show that he’s still folksy and down-to-earth.”

Huckabee, described in the piece as flying on private jets and having built a $3-million beachfront mansion in Florida, is quoted as saying he’s still the same person. But why is there an assumption that a few years of bigger paychecks will fundamentally transform a political figure?

Mitt Romney’s candidacy was dogged by his image as a clueless plutocrat. Unlike Huckabee or the Clintons, he is the son of a governor and former head of American Motors, so he’s always been seen as part of the silver spoon set. Romney didn’t help himself with some off-the-cuff remarks (“Ann has a couple of Cadillacs”) or by building a home with a car elevator.

And, of course, his tenure at Bain Capital allowed his political and media detractors to depict him as a heartless capitalist who thought nothing of laying people off or outsourcing their jobs. There is no question that an anti-business bias seeped into some of this coverage.

Jeb Bush, also born into a wealthy family, is now drawing media scrutiny for his involvement with the likes of Lehman Brothers and private equity firms—including from “Clinton Cash” author Peter Schweizer. That led to a Bloomberg Businessweek headline, “Jeb Bush Has a Mitt Romney Problem.”

Candidates who are born into wealthy dynasties often try to show they identify with working-class folks, as Jeb’s father did when he talked about his fondness for pork rinds.

Of course, rich men like FDR, JFK and Nelson Rockefeller managed to create an image of concern for the middle class despite their personal wealth. These days, however, there’s a media assumption that well-heeled Republicans belong in the party of the rich, while affluent Democrats still get the benefit of the doubt for identifying with the common man.

But the Clintons have stressed that assumption to the breaking point. They have both raked in huge speaking fees—more than $100 million, in the former president’s case—and yet talk about their situation as if they’re both trying to put food on the table. (Ann Romney told the GOP convention that she and Mitt initially lived in a basement apartment with a makeshift desk and “ate a lot of pasta and tuna fish.”)

Bill and Hillary’s situation is further complicated by the hundreds of millions of dollars flowing into the Clinton Foundation, some of it from donors who have also paid Bill lavish speaking fees. And Hillary has long been dogged by questions about her finances, such as when a well-connected Arkansas friend helped her turn a thousand-dollar investment in cattle futures into a $100,000 windfall.

No 2016 candidate wants to be tagged as the next Mitt Romney. But the media should also be careful about portraying business success as a liability.