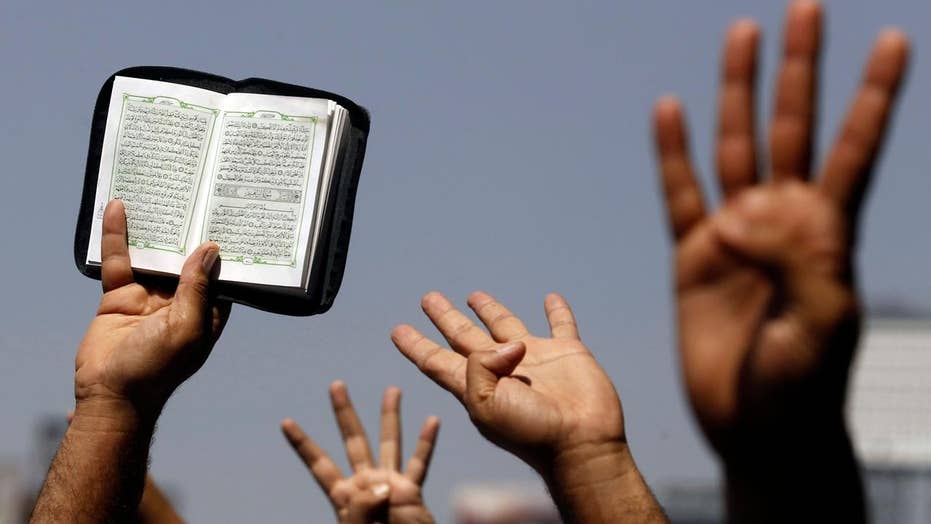 Arab allies of the U.S. are expressing support if the Trump administration declares the Muslim Brotherhood a terrorist organization, according to statements from foreign officials and a senior administration official who spoke to Fox News.

Speaking last week at the United Nations in response to a question from Fox News, the Egyptian Ambassador to the U.N., Amr Abdellatif Aboulatta, expressed support for such a move.

“It would be a positive step forward indeed,” he said.

Salman Al-Ansari, president of the Saudi American Public Affairs Committee, told Fox News that the West is suffering from “laziness and must do its homework.”

The Brotherhood is banned as a terrorist organization in Saudi Arabia, the UAE and Egypt.

Fox News previously reported on the internal debates and deliberations in the Trump White House on the move to designate the Muslim Brotherhood as a Foreign Terrorist Organization (FTO.)

FILE - In this Monday, May 19, 2014 file photo, supporters of the Muslim Brotherhood and other Islamists gesture from the defendants cage as they receive sentences ranging from death by hanging for one, life in prison for 13 and 8-15 years for the others after they were convicted of murder, rioting, and violence in a mass trial in Alexandria, Egypt. There is a gaping hole in the center of Egypt’s presidential election next week: The Muslim Brotherhood. Formerly the country’s most powerful electoral machine, the Islamic group has been decimated by a fierce crackdown and its members are boycotting the vote, struggling to step up protests to get their voice heard. But the street protests have become little more than routine, while the May 26-27 vote could seal the group’s expulsion from political life if a strong turnout shows the extent of the public’s shift away from the group since the ouster of Islamist President Mohammed Morsi. (AP Photo/Heba Khamis) (The Associated Press)

“The fight is far from over,” a senior administration official told Fox News.

“The commitment inside the West Wing to the question of designating the Brotherhood has not waned,” the official told Fox News.

“The White House completely understands how the modern global jihadi threat, which the president has rightly described as radical Islamic terrorism, can be driven back at its roots to the Brotherhood.”

“This president is unprepared to follow the disastrous policies of prior administrations, especially the Obama White House’s empowering of the Brotherhood that led to the catastrophic consequences of the so-called Arab Spring and the deaths of hundreds of thousands of people from the Sinai to Sinjar,” the official concluded.

Christopher Holton of the Center for Security Policy, a group that has been at the forefront of efforts to designate the Muslim Brotherhood as a foreign terrorist organization, told Fox News, “It is an absolutely essential step. As the Egyptian ambassador well knows, the goals of the Muslim Brotherhood are identical to those of all the jihadist organizations, such as ISIS, Al Qaeda and Hamas: the establishment of an Islamic state ruled by Sharia.”

Holton blamed what he called “The Swamp in the State Department” for stopping the designation so far. He blamed some members of the Trump administration, including National Security Adviser H.R. McMaster.

“Combined with all the other distractions that have largely paralyzed so many initiatives on Capitol Hill, the effort to block the designation has thus far succeeded,” he said.

Jonathan Schanzer, senior vice president at the Foundation for Defense of Democracies, told Fox News that during the early weeks of the Trump presidency a large number of analysts warned that the move was, “ill-advised,” arguing that the move “would alienate the Muslim world and encumber diplomacy.”

Schanzer, a former terrorism finance official at the Treasury Department, said he does not believe the administration has given up on designation of the Brotherhood but he suggested it would be easier to target certain Brotherhood groups through the U.S. Treasury’s targeted sanctions program.

“The way forward is not to pursue the FTO approach at the State Department, primarily because the initiative is likely to fail,” Schanzer said. “The State Department will remain opposed…the Muslim Brotherhood is not a homogeneous organization, rather, it is made up of disparate affiliates, some of which could likely be classified as terror groups, and some not.”

“The right move is to pursue these designations in the less-politicized Treasury process in a way that is incremental and pragmatic. From there, additional affiliates can be added,” Schanzer said.

David Reaboi, the senior vice-president for strategic operations at the Security Studies Group, added, “Designating the Muslim Brotherhood would be a tremendous step in the right direction. The Muslim Brotherhood has been identified, rightly, as a threat by the countries that know it best -- like Egypt, UAE, Saudi Arabia -- among others.”

“These countries understand that the MB isn't just another political or religious movement,” Reaboi added. “It’s the main engine driving the terror radicalization process. Any effort to combat Islamist terrorism needs to take the MB's global network into account.”