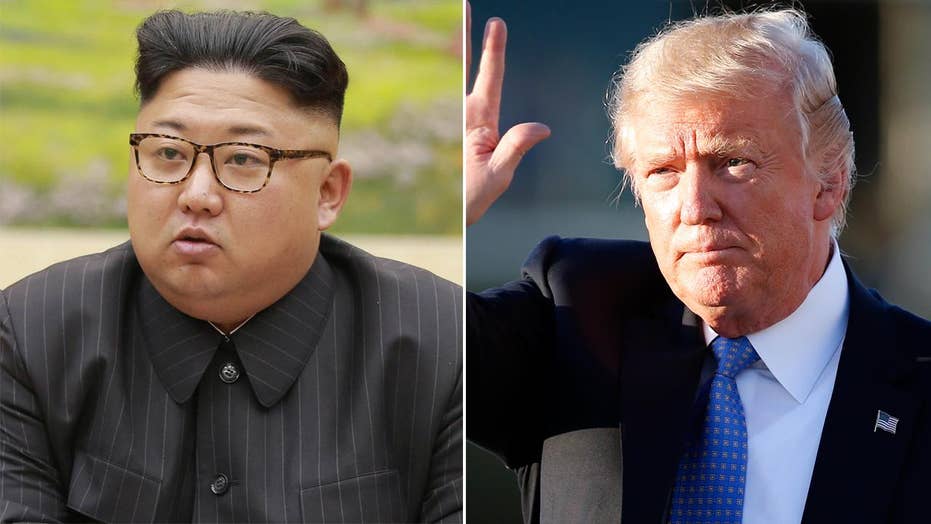 Is Trump's tough talk on North Korea helping or hurting?

By more than two-to-one, voters think the best way to stop North Korea from continuing work on nuclear weapons is through diplomacy rather than threats of military action, and most say the way President Trump talks about North Korea isn’t helpful.

Trump vows to "totally destroy" North Korea if the United States is forced to defend itself in a September 19 speech to the United Nations, and nicknames North Korean leader Kim Jong-un "Rocket Man."

Setting aside Trump’s words, the poll, released Wednesday finds roughly equal numbers feel the president is being "too tough" on North Korea (22 percent) versus “not tough enough” (19 percent). The largest portion, 46 percent, thinks his handling has been "about right."

On the best way to stop North Korea from continuing its nuclear program, more than twice as many voters opt for diplomacy and sanctions (61 percent) over threats of U.S. force (27 percent). Majorities of nearly every demographic group prefer the diplomatic route, although Republicans split on the issue (46-46 percent).

Most Republicans approve (75 percent) of the president’s handling of North Korea, but views among the party faithful divide over the way Trump talks about Pyongyang: 45 percent say it is helpful vs. 46 percent say not helpful.

"There is uneasiness among Americans about Trump’s ability to keep them safe," says Democratic pollster Chris Anderson, who conducts the Fox News poll along with Republican Daron Shaw.

"His saber rattling looks to be testing the patience of even some core supporters."

About 9-in-10 Democrats disapprove (88 percent) of the job Trump’s doing on North Korea and also feel he’s not helping with his talk about the country (92 percent).

"Presidents from Eisenhower through Obama have realized that there are no easy options when it comes to North Korea," says Shaw.

"Americans want to stand strong against that regime, but they clearly think President Trump is pushing the envelope with his rhetoric."

Voter sentiment on Iran is similar to views on North Korea.

Twice as many say the way Trump talks about Iran hurts rather than helps (59-27 percent).

In Trump’s U.N. speech, he also expressed his displeasure with the 2015 Iran nuclear deal -- suggesting the U.S. may pull out. The agreement, which requires recertification in October, eases U.S. sanctions for 10 years in exchange for Iran stopping its nuclear program over that time.

The poll shows that 35 percent of voters support the Iran deal, 38 percent oppose it, and 26 percent are unable to offer an opinion. When the agreement was made two years ago, 28 percent supported it, 56 percent were opposed, and 16 percent were unsure (September 2015).

On handling Iran, 39 percent approve of the job Trump is doing, while 45 percent disapprove.

Fourteen percent think he has been “too tough” on Iran, 25 percent say “not tough enough,” and 44 percent say “about right.”

The Fox News poll was conducted under the joint direction of Anderson Robbins Research (D) and Shaw & Company Research (R) among 1,017 randomly chosen registered voters nationwide reached on landline and cellphones from September 24-26, 2017. The margin of sampling error is plus or minus three percentage points for results among all registered voters.