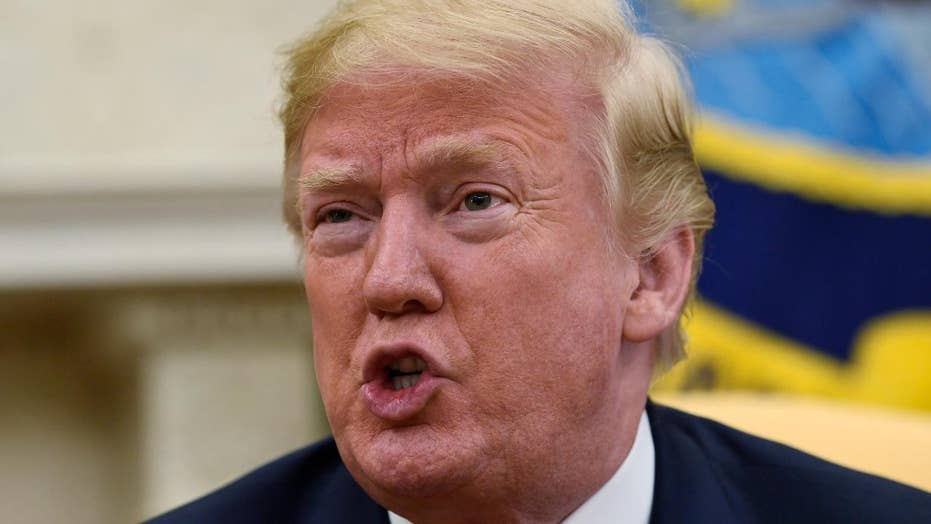 The president comments on his upcoming meeting with Kim Jong Un during an Oval Office meeting with Japanese Prime Minister Shinzo Abe.

President Trump’s overall job rating is holding steady, buoyed by a record number approving of his handling of the economy.  A Fox News poll released Thursday also finds that most like that he’s meeting with North Korea.

Forty-five percent of voters approve of the president’s performance, while 51 percent disapprove.  It was 44-53 percent in April.  Trump’s highest approval, 48 percent, came in February 2017, soon after taking office.

While more voters “strongly disapprove” (41 percent) than “strongly approve” (27 percent), that 14-point intensity gap is down from a high of 24 points in October 2017.

The president gets net negative ratings for his handling of immigration (43 percent approve vs. 52 percent disapprove), foreign policy (42-49), and international trade (41-49).

A strong jobs report released June 1 showed the U.S. with a seasonally adjusted 3.8 percent unemployment rate.  The president seems to get some credit for that.  His handling of the economy brings his most positive job ratings, as a record 52 percent approve, while 41 percent disapprove.

Optimism is increasing on North Korea, as more voters now think it could be convinced to give up its nuclear weapons.  Twenty-eight percent feel that way, up 12 points from 16 percent three months ago (March 2018).  Still, a majority, 60 percent, says North Korea won’t let go of its nukes.

By a narrow margin, voters think war with North Korea is less likely than it was two years ago (33 percent less likely, 28 percent more likely, 35 percent the same), and most approve of the president meeting with North Korean dictator Kim Jong Un (66-24 percent).

“Americans have mixed feelings on North Korea.  They want the U.S. to negotiate with Kim Jong Un even though they doubt the North Koreans would ever concede on the main sticking point between our countries: nuclear weapons,” says Republican pollster Daron Shaw, who conducts the Fox News poll with Democrat Chris Anderson.

“They also seem to think President Trump might be able to get a good deal, even though no one has a clue as to what that deal might entail.”

In March, Trump expressed interest in meeting with Kim and the administration announced May 10 that a U.S.-North Korea summit was in the works for June 12.  After being cancelled briefly in late May, the summit is officially back on the schedule.

Since March, approval of the summit has ticked up by three points, while the number who think Trump will get the better deal has narrowed by six points.

Voters explain why they approve (or disapprove) of President Trump

Okay.  But why do voters think he’s doing a good job or a bad job?

The latest Fox News poll asks voters to explain in their own words what is behind their approval or disapproval of the president.  Most could give fairly specific answers, as you’ll see below.

Among those disapproving, the most popular reasons are “he doesn’t know what he’s doing” (22 percent), “he doesn’t have the temperament” (20 percent), while others say he’s “divisive” or “racist” (13 percent), “corrupt” (9 percent), and “lies” (7 percent).  Six percent say they are afraid he’ll start a war.

“Opinions of how the president is doing are underpinned by strong and specific beliefs about the fundamental character of Donald Trump,” says Anderson.

“Don’t expect his approval rating to change unless something happens to challenge core beliefs about him personally.”

The Fox News poll is based on landline and cellphone interviews with 1,001 randomly chosen registered voters nationwide and was conducted under the joint direction of Anderson Robbins Research (D) and Shaw & Company Research (R) from June 3-6, 2018.  The poll has a margin of sampling error of plus or minus three percentage points for all registered voters.