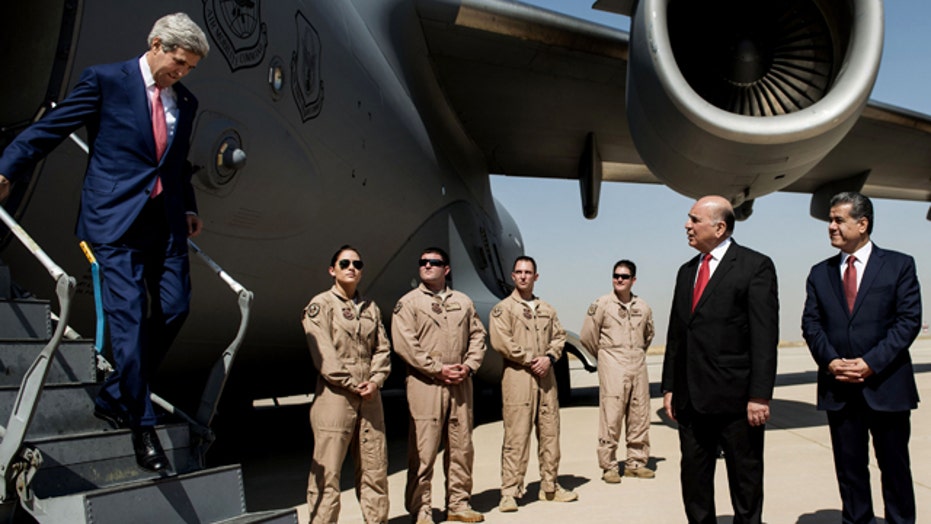 Is military action in Iraq inevitable?

What the U.S. role should be during the crisis

President Obama’s decision to send 300 special-forces advisers to Iraq leads most voters to believe a large number of combat troops will eventually go back there.

That’s according to a new Fox News poll released Tuesday.

The poll also finds that although most voters think the terrorist insurgents will win if the U.S. doesn’t help Iraq, a majority says it is more important to keep our troops out of Iraq than it is to stop the fighting.

And as the situation in Iraq deteriorates, American voters give President Obama a record-low approval rating on foreign policy.

Just 32 percent of voters approve of the job Obama is doing on foreign policy today. That’s down from 34 percent approval in early June and from a previous low of 33 percent in March. Six in 10 disapprove (a new high).

Looking back, just 29 percent say Obama had “enough foreign policy experience to be an effective president and commander-in-chief” when he ran for president in 2008, while most -- 64 percent -- think he wasn’t qualified.

The poll shows 71 percent of voters think the Iraqi government can’t defeat the insurgents without help from the United States. That includes majorities of Democrats, Republicans and independents.

Still, by a 25 percentage-point margin, voters feel it is more important for U.S. forces to stay out of Iraq (58 percent) than it is to keep terrorists from taking over the country (33 percent). Views among veterans and those currently serving in the military are almost identical to overall sentiment (57-35 percent).

And a 55-percent majority says Obama did the “right thing” by withdrawing all U.S. troops from Iraq in 2011. Forty-one percent call that a “mistake.”

Veterans say the withdrawal was a mistake by 49-45 percent.

Meanwhile, in a reversal of opinion, more voters now say the Obama administration is not as serious about fighting terrorism as the Bush administration was.

In 2010, just over half of voters said Obama was just as serious as Bush about fighting terrorism. Today, 52 percent say Obama is not as serious, up from 37 percent who said the same in January 2010. More than one in five Democrats thinks Obama isn’t taking the war on terrorism as seriously as Bush (22 percent).

What should the United States do to help fight the insurgents in Iraq? Fifty-nine percent approve of Obama’s plan to send 300 advisers to work with the Iraqi military. There’s rare partisan agreement on this plan, as Democrats (61 percent), Republicans (61 percent) and independents (55 percent) are all about equally likely to approve.

As brutal terrorist violence sweeps through Iraq, less than half of voters (46 percent) now think the Iraqi people are better off because of the U.S.-led military action taken. That’s quite a drop -- 25 points -- from the 71 percent who felt that way in 2010.

In addition, the number who feel the United States is safer because of the action taken in Iraq now stands at 49 percent, down from 58 percent in both 2013 and 2010.

The shift on both of these measures comes mainly from Republicans and independents, as views among Democrats held a bit steadier. Consider this: Since 2010, the number of Republicans who think Iraqis are better off is down a whopping 41 points, and among independents it’s dropped 36 points. Among Democrats it’s down 10 points.