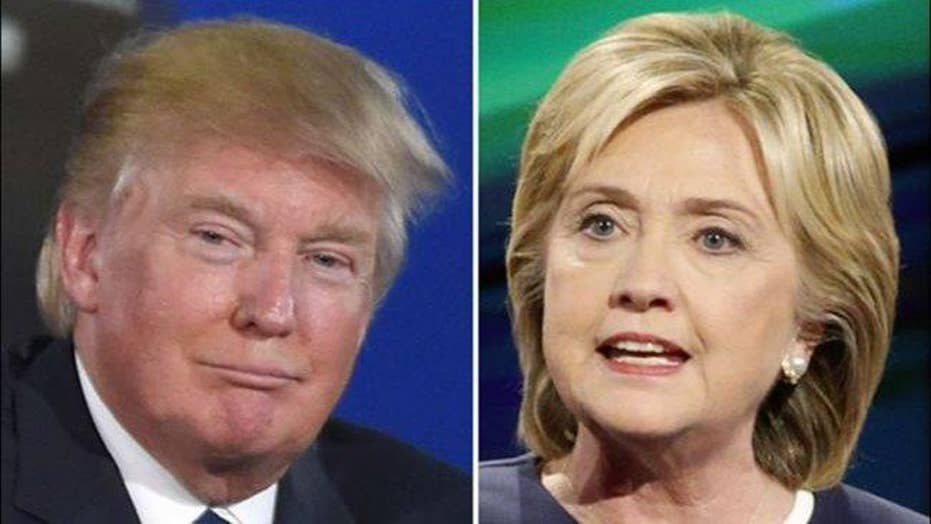 With less than two weeks to go, the race for the White House has narrowed as Hillary Clinton now has a three-point advantage over Donald Trump.

That’s within the margin of error of the national Fox News Poll of likely voters.

Clinton is ahead of Trump by 44-41 percent.  Another one-in-ten back a third-party candidate and four percent are undecided.  Last week she was up by six points (45-39 percent) and before that by seven (45-38 percent).

The poll, released Wednesday, finds Clinton leads 49-44 percent in the head-to-head matchup.  That 5-point advantage is at the edge of the error margin.  She was up 7 a week ago (49-42 percent).

Trump is helped by increased backing among independents and greater strength of support: 68 percent of those backing Trump support him “strongly,” compared to 61 percent for Clinton.

Independents favor Trump over Clinton by 13 points (41-28 percent).  He had a 7-point advantage last week, and two weeks ago they were tied at 35 percent each.  Third-party candidates play a role here, as Gary Johnson (14 percent) and Jill Stein (7 percent) receive the combined support of more than one-in-five independents.

In the four-way race, Trump leads among whites (+14 points) and men (+5), although his best groups remain white evangelical Christians (+56) and whites without a college degree (+28).

The candidates garner almost equal backing among the party faithful:  83 percent of Democrats back Clinton, while 81 percent of Republicans support Trump.

“To be competitive, Trump needs to consolidate support among Republicans and carry independents,” says Republican pollster Daron Shaw.  “That’s where he’s made in-roads in the last week, mostly by focusing his attention on the economy and Obamacare.”   Shaw conducts the Fox News Poll with Democratic counterpart Chris Anderson.

Trump’s substantive strength is the economy.  He’s trusted over Clinton by four points, yet that’s the only issue where he bests her.  More trust Clinton to handle foreign policy (+15 points), immigration (+3), and terrorism (+3).

Who would voters put across the table with Russian President Vladimir Putin?  More trust Clinton to negotiate with Putin by 3 points (47-44 percent among registered voters).  That’s down from a 13-point lead on this measure in April (53-40 percent).

All in all, likely voters don’t think Trump is up to the task:  less than half think he’s qualified to be president (46 percent) and even fewer feel he has the temperament to serve effectively (36 percent).  Plus, over half lack confidence in his judgment in a crisis (56 percent).

Clinton trounces Trump on each of those measures:  64 percent believe she’s qualified, 62 percent say she has the temperament, and 56 percent are confident in her judgment.

Plus, Clinton continues to receive more positive personal ratings.  She has a net negative rating of eight points (45 favorable vs. 53 unfavorable), while Trump is underwater by 14 (42 favorable vs. 56 unfavorable).  In addition, when undecided voters and those backing third-party candidates are combined, 26 percent have a favorable view of Clinton vs. 18 percent for Trump.

Yet despite Trump’s weaknesses on traits, it’s still a tight race.  That’s because, at least in part, lots of folks prioritize issues when deciding their vote.  By a 59-28 percent margin, more say their decision is about the issues as opposed to the character of the candidates.  Those backing Trump are more likely to be voting on issues than character by a wide 57-point margin (73-16 percent).  For Clinton supporters, the choice is more about issues by 12 points (47-35 percent).

Compared to 2008, this is a more character driven election.  At that time, voters said issues were more important than personal qualities by a 71-14 percent margin.

"The bottom hasn't fallen out for Trump and Clinton hasn't pulled away, but the race isn’t as close as the 3-point lead suggests,” says Anderson.  “Trump needs a solid majority of undecided voters and wavering supporters of third-party candidates, and that’s extremely unlikely since most of them think he lacks the judgment, temperament, and qualifications to be president."

There are a couple of areas where the two are about evenly matched.  First, 52 percent feel Clinton “stands up” for people like them, and 49 percent feel that way about Trump.

Also on their honesty -- or lack thereof:  a record-low 30 percent of likely voters think Clinton is honest and trustworthy, while 34 percent say Trump is.

Here are five additional takeaways from the poll.

- 63 percent of Trump’s supporters believe things in the United States generally favor “other people,” rather than people like them.  Forty-four percent of Clinton’s supporters feel that way.

“Models suggest a 2-point Democratic advantage on the generic ballot would result in a gain of about 11 seats in the House and 4 in the Senate,” says Shaw.  “That means the GOP would retain an edge of about 20 seats in the House, while the Senate would be very much up for grabs.”

The Fox News Poll is based on landline and cellphone interviews with 1,309 randomly chosen registered voters nationwide and was conducted under the joint direction of Anderson Robbins Research (D) and Shaw & Company Research (R) from October 22-25, 2016.  The survey includes results among 1,221 likely voters.  The margin of sampling error is plus or minus 2.5 percentage points for results among both registered and likely voters.