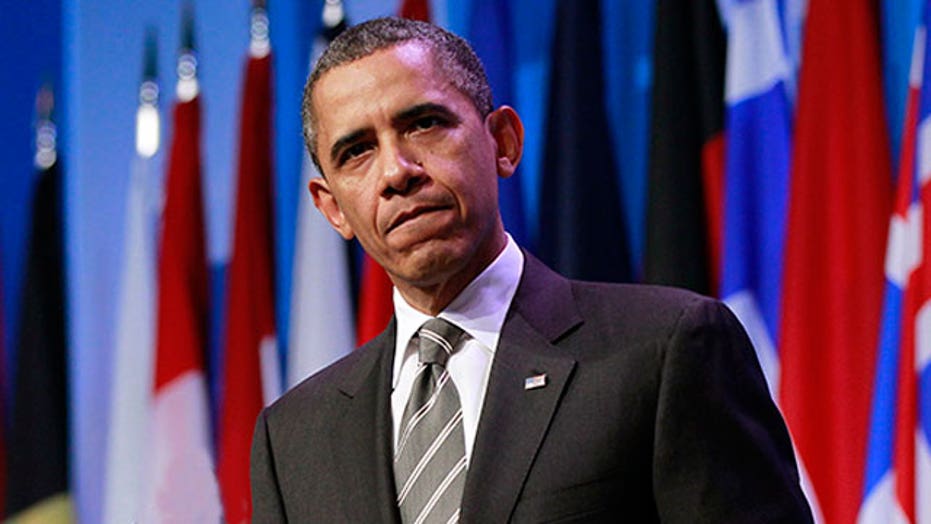 The world’s “going to hell in a handbasket,” according to a majority of voters in the latest Fox News poll.

And that’s draining support for President Obama’s policies. But will it help Republicans on Election Day? Unclear.

The new poll, released Wednesday, finds 58 percent of voters feel things in the world are “going to hell in a handbasket.” That includes nearly half of Democrats (48 percent) and majorities of independents (61 percent) and Republicans (71 percent).

Some 35 percent of voters channel Bob Marley’s mantra that everything will be all right.

Meanwhile, by a 61-36 percent margin, voters say they don’t feel hopeful about the direction of the country. That’s a reversal from 2012 when 57 percent felt hopeful. The shift is driven by a nearly 30-point drop among Democrats: 80 percent felt hopeful two years ago, while just 52 percent say the same now. In August 2012, Democrats were likely buoyed by Obama’s re-election campaign.

In a recent economic speech at Northwestern University, Obama said even though he wasn’t on the ballot this election -- his policies were. He should be glad that’s not actually the case: a 53 percent majority would vote against his policies if they were up for a vote. That includes one in six Democrats (17 percent).

Plus, by a 10 percentage-point margin, more voters think the country is “worse off” today than before Obama was elected (49 worse off vs. 39 better off).

The president’s job rating is only slightly better: 40 percent approve and 52 percent disapprove.

And then there’s this: voters not only think his signature legislation ObamaCare is “mostly a bad thing” for the country (52 percent), they also believe the administration misrepresented the law to get it passed (55 percent).

Despite all that negative sentiment toward the administration, the poll shows Republicans have failed to make significant gains this election season -- mostly because voters think they stink too.

Before the 2010 midterm election, Democrats were underwater by 8 points, while the GOP was even at 44 percent favorable and 44 percent unfavorable.

The generic ballot test shows likely voters prefer the Republican candidate over the Democrat in their House district by a slim three-point margin: 45-42 percent. That’s well within the poll’s margin of sampling error. Two weeks ago the GOP candidate was up by seven points (47-40 percent among likely voters).

The gender gap continues, as women are more inclined to back the Democratic candidate by a 10 point margin, while men pick the Republican candidate by 18 points.

Independents are twice as likely to support the Republican over the Democrat (49-25 percent).

Likely voters also want Republicans to win control of the U.S. Senate this year by 47 to 43 percent.

Three weeks before Election Day, the spread on the generic House vote has narrowed despite enthusiasm remaining higher among the GOP. Among likely voters, more Republicans (45 percent) than Democrats (30 percent) are “extremely” interested in the election by 15 points. Two weeks ago it was GOP +10.

Republicans (66 percent) are also more likely than Democrats (60 percent) to say the outcome of this year’s election will be “very” important to the direction of the country.

The well-known get-out-the-vote efforts by Democrats could blunt the Republican enthusiasm edge. So far though, about equal numbers -- about one voter in four -- have been contacted this year about voting for Republicans as for Democrats.

Voters are sharply divided on social issues, such as legalizing same-sex marriage (45 favor versus 45 oppose) and creating a pathway to citizenship for illegal immigrants currently living in the U.S. (46 favor vs. 44 oppose).

On abortion, 43 percent of all registered voters are pro-life, while 48 percent are pro-choice. Among likely voters, it splits 46-46.

Voter confidence that the Secret Service “can protect the president from harm” has dropped to 47 percent -- hardly surprising given that an armed man jumped the fence and made it inside the White House last month. In January 2009 a high of 66 percent had confidence in the Secret Service. Now a 52 percent majority is not confident.

Former Defense Secretary Leon Panetta released a book critical of his former boss, President Obama. What do voters think of officials slamming a president after working for him? By more than two-to-one, voters say it is “honorable” rather than “disloyal” (59-27 percent).

A 55-percent majority favors Obama stopping “all border crossings into or from Mexico” until a U.S. Marine who mistakenly crossed the border six months ago is released (36 percent opposed).

The Fox News poll is based on landline and cell phone interviews with 1,012 randomly chosen registered voters nationwide and was conducted under the joint direction of Anderson Robbins Research (D) and Shaw & Company Research (R) from October 12-14, 2014. The full poll has a margin of sampling error of plus or minus three percentage points. For the subgroup of 831 likely voters, the margin of sampling error is also plus or minus three points.