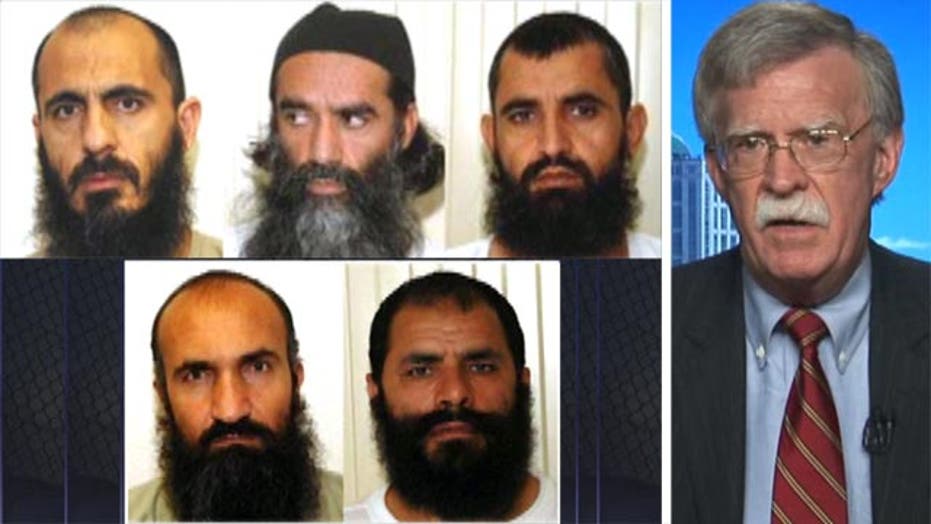 Can Qatar be trusted to track the 'Taliban Dream Team' and restrict their travel as part of the controversial prisoner swap for Sgt. Bergdahl

Americans hold mixed views of the Obama administration’s deal to swap a captive U.S. soldier for five Taliban prisoners, yet almost all fear that negotiating with terrorist groups will put U.S. troops at risk.

A prisoner exchange Saturday that released U.S. Army Sgt. Bowe Bergdahl for five top-level Taliban prisoners held at Guantanamo Bay has sparked debate over negotiating with terrorists. Fully 84 percent of voters are concerned that making deals with terrorists will encourage those groups to take more American soldiers hostage. That includes a 57-percent majority that is “very” concerned and another 27 percent that is “somewhat” concerned.

Only 15 percent aren’t worried deals like this will put more troops at risk.

Bergdahl was held captive for five years in Afghanistan. Voters are nearly evenly divided over the Taliban-exchange deal that got him released: 45 percent approve vs. 47 percent disapprove.

While 59 percent of Democrats approve of the swap, nearly a third disapproves (32 percent). Views among Republicans are reversed: 31 percent approve vs. 62 percent disapprove. Independents are more likely to disapprove (49 percent) than approve (41 percent) of the exchange.

It’s worth noting that this has been a fast-moving story and the poll was conducted before it was widely known that Bergdahl had written letters to his father saying he was ashamed to be an American and before the multiple news reports that Bergdahl intentionally walked off his post.

There’s far more agreement about what negotiating with terrorists could mean going forward, as large majorities of Democrats (77 percent), independents (83 percent) and Republicans (93 percent) are all concerned these groups will take more Americans hostage.

By a 55-39 percent margin, voters approve of President Obama’s announcement last week to keep 9,800 U.S. troops in Afghanistan for a year and then gradually remove almost all troops by the end of 2016.

Most of the four in 10 voters who disapprove of the president’s new plan think U.S. troops should leave sooner.

As a candidate, Obama called Afghanistan a "war of necessity" and made clear his commitment to the U.S. action there. The United States currently has about 32,000 troops in Afghanistan.

Most Democrats (71 percent) and just over half of independents (55 percent) approve of the president’s plan to remove most troops. A 54-percent majority of Republicans disapproves.

While veterans approve of Obama’s plan to draw-down troops (by 51-44 percent), they disapprove of the prisoner swap (by 52-43 percent). Fully 86 percent of veterans are concerned the deal could result in targeting more U.S. troops, including 65 percent who are “very” concerned.

Overall, voters are unhappy with the job Obama is doing on foreign policy: 34 percent approve, while 56 percent disapprove. That’s just a touch above his record-low rating of 33-56 percent in early March 2014.