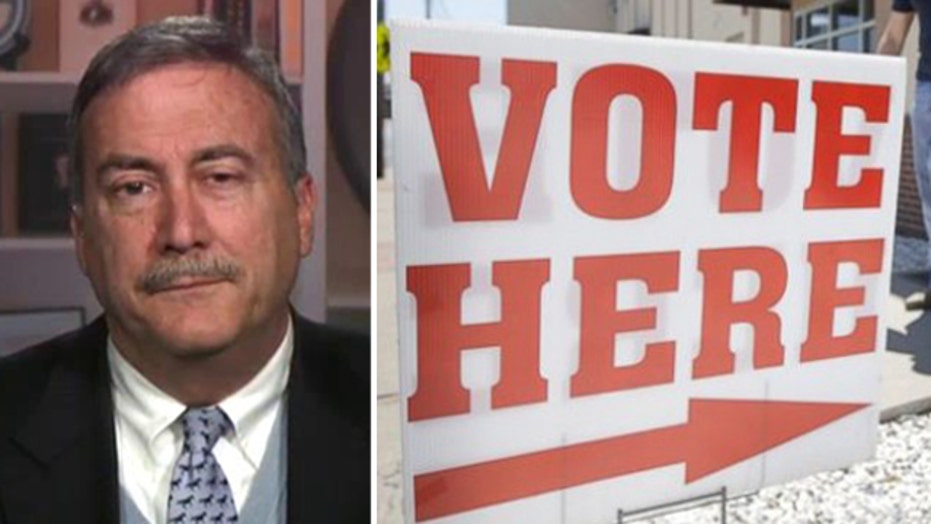 Many key Senate races too close to call

“It all comes down to turnout.”

That’s one of the biggest clichés in politics. It’s also true in one-point races. Welcome to Iowa, Kansas and North Carolina.

According to the latest round of Fox News Senate battleground polls, none of the front-runners in those states hits the 50 percent mark. That means these races will be decided by late-deciding voters -- and campaigns competing furiously to get their voters to the polls.

One thing that is baked into the cake: President Obama is unpopular in these states. That will motivate Republican voters, yet there’s more to these races -- and with four days until Election Day, a lot could happen.

Let’s start in Kansas, which has the most volatile Senate race.

No one was talking about Kansas when election season started. But everyone is now, as two long-time incumbents could get their walking papers Nov. 4.

The new poll of Kansas likely voters finds independent Greg Orman has a one-point edge over Republican Sen. Pat Roberts: 44-43 percent. Three weeks ago, Roberts was up by five (44-39 percent).

Both candidates remain well below 50 percent, as Libertarian Randall Batson receives 3 percent, and another 9 percent is undecided or will vote for someone else.

The Democratic candidate, Chad Taylor, withdrew from the race Sept. 3. Roberts was expected to win re-election until Taylor dropped out.

Still, many more Kansans identify as Republican than as Democrat. So why isn’t Roberts ahead?

Orman has the edge not only because he captures the support of most Democrats, but also just over half of independents -- and more than a handful of Republicans to boot.

Eighty percent of Democrats back Orman. And nearly one in five Republicans go for him too (18 percent). Independents favor him by a margin of 51-26 percent.

Meanwhile, the incumbent is having trouble consolidating the base: only 76 percent of Republicans support Roberts, who has represented Kansas in the Senate since 1997.

Interest in the election is up among Democrats:  66 percent were extremely or very interested earlier this month. That’s up to 74 percent now. Interest among Republicans held steady.

Eighty-nine percent of each candidate’s backers say they are certain to vote for their guy.

Orman has so far refused to say which party he would caucus with should he win. Most of his backers -- 75 percent -- want Democrats to retain control of the U.S. Senate, while 12 percent want Republicans to win.

Obama’s job performance rating is underwater by 17 points in Kansas, the worst rating of the three battleground states tested. Some 39 percent approve, while a 56-percent majority disapproves.

Among those undecided about their vote in the Senate race, 36 percent approve of Obama, while 40 percent disapprove and the remaining 24 percent are unsure.

The small already-voted group goes for Orman by 51-36 percent.

Brownback is hurt by a lack of party loyalty, as just 73 percent of Republicans support him and 20 percent back Davis.

An 89-percent majority of Democrats are voting for Davis and independents back him by 53-27 percent.

Both Ernst (94 percent) and Braley supporters (95 percent) have a high degree of vote certainty, and both candidates receive strong backing from their party faithful (89 percent and 90 percent respectively).

The reverse gender gap continues, as women are more likely to back Braley by 13 points, while more men support Ernst by 15 points.

Ernst is also helped by the fact that a 55-percent majority of Iowa likely voters disapproves of the job Obama is doing. Just 40 percent approve.

It’s a bad sign for Braley that undecided voters disapprove of Obama’s performance by a wide 25-point margin.

In addition, those who have already voted back Ernst by 61-31 percent.

There’s not much of a contest in the Iowa governor’s race, as incumbent Terry Branstad remains well ahead of his Democratic challenger Jack Hatch: 53 percent vs. 36 percent.

Branstad’s lead comes from overwhelming support from Republicans (91 percent). Plus, he gets 13 percent of Democrats and 63 percent of independents.

Democratic Sen. Kay Hagan is up by just 43-42 percent over Republican challenger Thom Tillis among North Carolina likely voters.  That’s down from a 5-point edge last month, when she was up 41-36 percent (Sept. 14-16).

The incumbent Democrat’s lead widens to 55-31 percent among the small subgroup of voters who have already cast their ballot.

Eighty-six percent of Democrats back Hagan, while 84 percent of Republicans support Tillis. In a tight race, those couple of points matters.

Independents split 36-36 percent. In September they backed Tillis by 12 points.

A special note to election junkies:  North Carolina polls close at 7:30 p.m. ET on election night and will provide early clues about which party will control the U.S. Senate. If Hagan ultimately loses, it will be a bad harbinger for Democrats.

"If you think about the three Southern states in which Republicans are trying to knock off incumbent Democrats -- Arkansas, Louisiana and North Carolina -- Sen. Hagan is almost certainly the toughest 'out' for the GOP," says Republican pollster Daron Shaw, who jointly conducts the Fox News poll with Democratic pollster Chris Anderson.

Among Tillis supporters, 92 percent feel certain they will vote for him, while 88 percent of Hagan supporters say the same.

So, that’s enough about midterm elections. Let’s talk about the race everyone also wants to really talk about:  2016!

In Iowa, the first hurdle to the White House, Democrats prefer Hillary Clinton. By a lot: 62 percent want her to be the nominee. She’s followed by Massachusetts Sen. Elizabeth Warren at 14 and Vice President Joe Biden at 10 percent.

In Ohio, a virtual must-win state in presidential elections, Clinton tops each of the Republican challengers tested.

The closest hypothetical matchup is between Clinton and Ohio Gov. John Kasich. She bests him by just 3 points among Ohio voters: 47-43 percent.

Clinton also tops Christie by 7 points, Paul by 9 points, and both Jeb Bush and Texas Gov. Rick Perry by 10 points.

The Fox News Poll is conducted under the joint direction of Anderson Robbins Research (D) and Shaw & Company Research (R). The polls were conducted Oct. 28-30, 2014, by telephone (landline and cell phone) with live interviewers among a random sample of likely voters in Iowa (911), Kansas (907), North Carolina (909) and Ohio (803).  Results based on the full sample in each state have a margin of sampling error of plus or minus three percentage points. 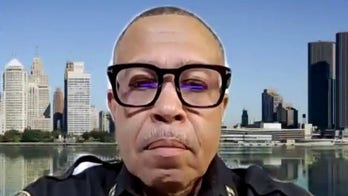