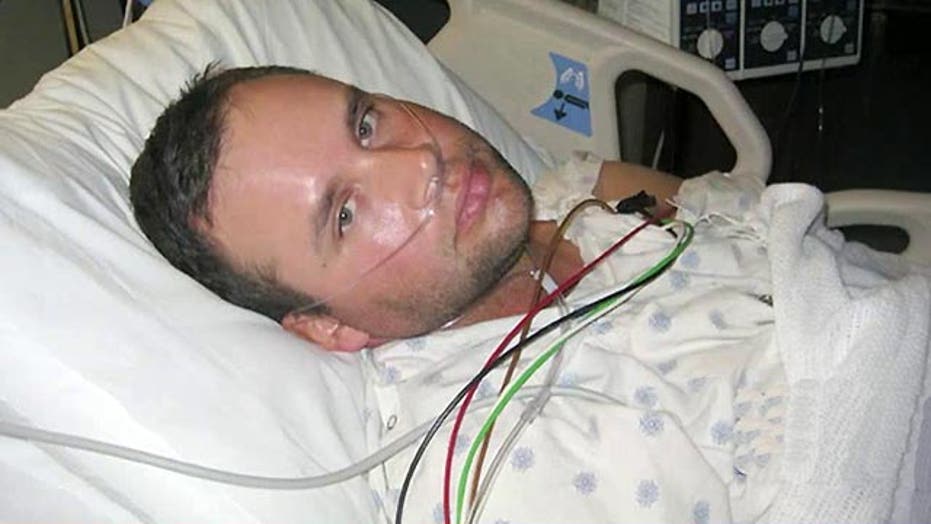 EXCLUSIVE: The Obama administration has finally acknowledged that those hurt and killed in the 2009 Fort Hood shootings were victims of terrorism -- and not “workplace violence,” as it was previously described. But while formal recognition of that is set for Friday, when victims will receive the Purple Heart, it may only be symbolic.

Fox News has learned as part of its ongoing investigation of the 2009 terrorist attack that the military, at least in one case, is still denying benefits for injuries sustained in the attack.

"I think it's almost unheard of for someone to receive the Purple Heart but not have their injuries deemed combat-related," Shawn Manning, who was seriously injured in the 2009 attack, told Fox News. "I know that was not what Congress intended to have happen, but it is what currently the Army has determined is going to happen."

On Nov. 5, 2009, then-Staff Sgt. Manning was shot six times by Maj. Nidal Hasan. Two bullets are still in his body -- one in his leg, the other in his back -- and he suffers from PTSD.

The 2015 defense budget -- known as the National Defense Authorization Act, or NDAA -- included language that meant Fort Hood victims were eligible for the Purple Heart honor because the attack was inspired by a foreign terrorist group, and not workplace violence, as the Defense Department initially labeled it.

Manning submitted new paperwork so the Army would recognize his injuries were sustained in the line of duty. But his appeal was rejected by a physical evaluation board, apparently based on a narrow interpretation of the law.

"Section 571 of the 2015 National Defense Authorization Act addresses both the awarding of the Purple Heart to service members killed or wounded in attacks inspired or motivated by foreign terrorist organizations and the Defense of Freedom Medal for those members and civilians killed or wounded during the Fort Hood attack on 5 November 20009," the April 6 letter states.

"Nowhere in the act, however, does it offer combat benefits for service members permanently disabled in attacks inspired or motivated by foreign terrorist organizations. Although subsequent legislation and guidance may change, currently, the Board has no authority to award V1/V3 (service related) designation to soldiers disabled during the Fort Hood attack. "

Manning said, “it's a great thing to finally be recognized, to stand up there and say, ‘Hey your sacrifice did mean something.’”

But he said the board’s decision means, on a practical level, his family will lose back pay, and $800 a month in benefits, adding he believes other Fort Hood survivors will face the same treatment. “I think you know it's a huge let-down. I hope that's not what the Army had intended to do."

An earlier letter in 2012 was absolute in its denial of the terrorist connection, even though the evidence showed Hasan was emailing the Al Qaeda cleric Anwar al-Awlaki prior to the attack.“MAJ Hasan has been charged with criminal activity, but has not been adjudicated a terrorist. Therefore, the clear preponderance of evidence does not support that the injuries sustained were the direct result of armed conflict,” the letter said.

It went on to state Manning’s injuries were not caused by an “instrumentality of war” because Hasan’s “weapon was a private semi-automatic pistol. The army did not issue this weapons to the soldier.”

Fox News contributor and former Army Chief of Staff retired Gen. Jack Keane said the Purple Heart is much more than a medal. It is also a promise to care for the injured.

"This country has made a commitment for some time to take care of people who have those disabilities and to provide, not just medical support but financial support as well,” he said.“So, I'm convinced this is going to get fixed."

Army spokeswoman Cynthia O. Smith told Fox News in a statement, “All recipients of the Purple Heart Medal under section 571 of the NDAA 2015 will receive the benefits to which they are legally entitled.In the case at issue, no final decision has been rendered, and the Soldier will have a full opportunity to present evidence at a formal hearing."

Based on the statement, Fox News followed up to ask if it is the Army's intention that the Fort Hood Purple Heart recipients would need to go to a formal hearing, as is the case with Manning,to prove their injuries are combat-related. There was no further comment from the Army.