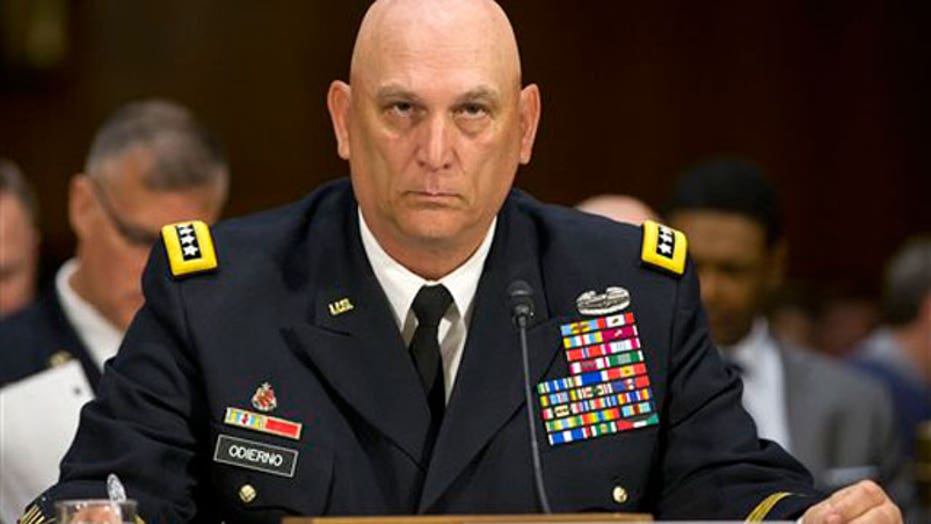 The White House would not say Monday whether President Obama thinks U.S. troops returning from the Ebola hot zone in West Africa should be quarantined, as the U.S. Army unilaterally imposed that policy on its own troops and the Joint Chiefs of Staff recommended the rest of the military follow suit.

Defense Secretary Chuck Hagel currently is considering the Joint Chiefs' recommendation to impose a mandatory 21-day quarantine for all returning troops. At Monday's daily briefing, White House Press Secretary Josh Earnest acknowledged that Hagel might coordinate with the White House on that decision.

But when pressed by Fox News on what the president's position is, Earnest would not say.

"We will let the Department of Defense make an announcement," Earnest said. Asked how the U.S. could send troops to West Africa without a clear plan on procedures for leaving the Ebola battlefield, Earnest said: "We're going to let science drive that process."

The comments reflected the latest area of confusion in the ever-evolving U.S. response to the Ebola outbreak in West Africa. Over the weekend, the White House put pressure on New Jersey and New York over policies quarantining returning health care workers. But it remains unclear where the White House -- and Hagel himself -- stands on applying that standard to returning U.S. servicemembers.

Also on Monday, federal health officials issued new guidelines calling for voluntary, home quarantine for people returning from West Africa at the highest risk of contracting Ebola. The new guidelines detail various risk levels, with the highest being those who, for instance, may have been stuck by a needle while caring for an Ebola patient. But most health workers still would be subject only to daily monitoring.

So far, the Army is the only military branch to take the step of ordering mandatory quarantines. In a decision Fox News confirms was made by Army Chief of Staff Gen. Ray Odierno, the Department of the Army has issued guidelines ordering troops returning from West Africa into a 21-day isolation, separated from their families and other troops.

Currently, a team that consists of Maj. Gen. Darryl A. Williams and 11 other troops is being held in isolation in a building at their base in Vicenza, Italy, after returning from Liberia.

"There are several dozen more people due in, and they will go through the same procedure," Pentagon spokesman Col. Steve Warren said, adding that "no specific event or incident" triggered the policy.

Asked if Hagel thought the Army's decision was a good idea, Warren said "he would have to get back" to Fox News on the question.

The secretary is deliberating, and no final decision has been made. "Secretary Hagel has a big problem," one senior U.S. official told Fox News, referring to the decision he has to make.

If the Pentagon does decide on a 21-day quarantine for all returning personnel, it would represent a major shift in its Ebola response policy. And it could put them at odds with the White House.

"The Obama administration is going to war with New York and New Jersey, but its own military is recommending the same thing," a senior U.S. official told Fox News.

Earnest stressed Monday that the Defense Department's policy for all branches has "not been settled and implemented yet."

He also drew a distinction with the policies implemented in New York and New Jersey, noting that they singled out health workers.

Earnest said the administration wants to make sure that government policies "do not serve as a disincentive" to doctors and nurses.

The current military plan, outside the Army, is only to quarantine those individuals who may come in contact with infected patients.

Defense Department officials have made clear that no personnel are going to be treating infected patients and that the vast majority of the troops in Liberia are logistical experts who are establishing the medical infrastructure for health care workers outside the Department of Defense.

But a growing number of U.S. military personnel are being deployed, and would be affected by any blanket quarantine order. As of Friday, 686 U.S. troops were in West Africa as part of that mission, with hundreds more expected to have arrived over the weekend.

If Hagel accepts the recommendation from the Joint Chiefs, it would put the Defense Department in line with New York and New Jersey, which have faced the ire of the White House for such mandatory quarantine policies for returning health workers.

Amid that pressure, New Jersey Gov. Chris Christie's administration on Monday said a health care worker quarantined after she returned from Sierra Leone -- and who threatened a lawsuit -- has been cleared to go home.

The state Department of Health said the patient, Kaci Hickox, has been symptom-free for 24 hours, and "is being discharged" after being evaluated in coordination with the Centers for Disease Control and Prevention. The health department said Monday that the patient was subject to quarantine at first because she had direct exposure to people suffering from Ebola in West Africa. At this point, though, she has requested to return to Maine, and the state says that will be arranged "via a private carrier."

"She will remain subject to New Jersey's mandatory quarantine order while in New Jersey," the department said. "Health officials in Maine have been notified of her arrangements and will make a determination under their own laws on her treatment when she arrives."

New York Gov. Andrew Cuomo also announced late Sunday he had loosened some of the restrictions in the mandatory 21-day Ebola quarantine he had ordered along with Christie this past Friday.

Under the new guidelines, health workers who have had contact with Ebola patients will be quarantined at home and receive twice-daily monitoring if they have no symptoms. Family members will be allowed to stay. The state will pay for any lost compensation, if they are not paid by a volunteer organization.

Meanwhile, in New York a 5-year-old boy returning from West Africa reportedly was taken to a local hospital Sunday with possible Ebola symptoms. He was reported to have a 103-degree fever.