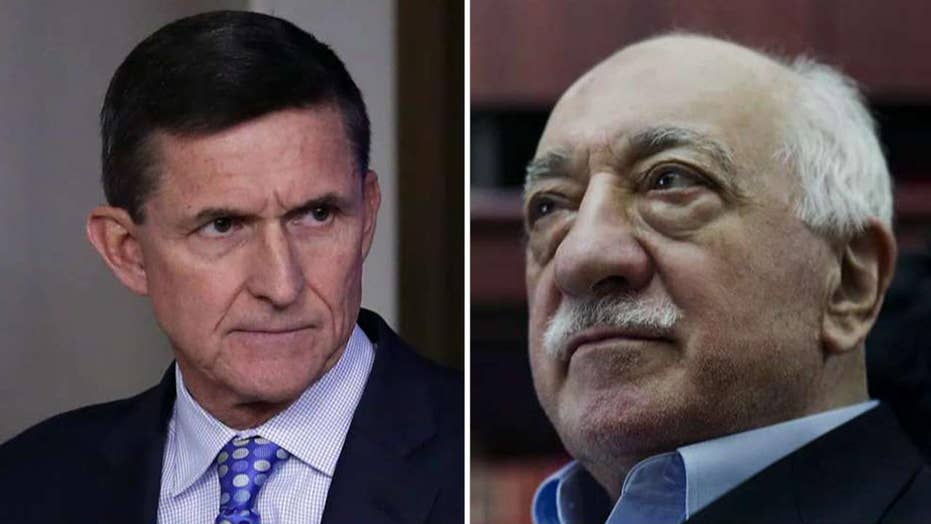 Investigators are probing whether the former national security adviser and senior Turkish officials discussed abducting a U.S.-based cleric who is a rival of Erdogan; Catherine Herridge reports for 'Special Report.'

Former White House National Security Adviser Michael Flynn and his son are reportedly being investigated by special counsel Robert Mueller in connection with an alleged multimillion-dollar plot to nab a Muslim cleric in the United States and deliver him to Turkey.

The purported incident and the Flynns’ potential involvement being part of Mueller’s Russia collusion-meddling probe was reported first by The Wall Street Journal.

People familiar with the investigation told the newspaper that Flynn, a retired Army lieutenant general, and son Michael Flynn Jr. were set to get as much as $15 million to deliver cleric Fethullah Gulen to the Turkish government.

Turkey officials were apparently anxious to get the cleric after President Recap Tayyip Erdogan tried and failed to get the United States to extradite Gulen, whom Turkish officials accuse of being a terrorist.

A Flynn spokesman declined to comment for the newspaper on the story.

On Sunday, the Turkish Embassy in Washington said Gulen was the “mastermind” behind an assassination attempt on Erdogen and a failed 2016 terror coup in which 250 people were killed in Turkey. However, embassy officials dismissed as “utterly false, ludicrous and groundless" news reports that the Turkish government tried illegally to get the cleric to Turkey.

“The fact that Fethullah Gulen … continues to find refuge in the United States remains perplexing and deeply frustrating for the Turkish people,” the statement in part reads. “We continue to work in close coordination with our colleagues in the relevant U.S. agencies to ensure that they comprehend the full scope of the criminality of the … Fethullah Gulen Terror Organization.”

NBC is reporting that Mueller’s team, in its Justice Department investigation, is also looking into an alleged December 2016 meeting in which Flynn allegedly met with Turkish officials before President Trump’s inauguration about perhaps trying to use his influence to help the Turkish government.