Dr. Deandre Poole, a Florida Atlantic University instructor and president of the United Faculty of Florida - FAU chapter, is running for in the 2020 election to become Palm Beach County supervisor of elections. In 2013, he made headlines for a class assignment instructing students to write "J-E-S-U-S" on a piece of paper and then step on it. (Courtesy of Deandre Poole)

A South Florida professor who made national headlines for a "stomp on Jesus" assignment is running for political office.

Deandre Poole, 32, is running in the 2020 election to become Palm Beach County supervisor of elections, a position held by Susan Bucher, who was suspended by Gov. Ron DeSantis and then resigned after drawing national scrutiny in 2018 for failing to report election results on time, the South Florida Sun-Sentinel reports.

Poole got national attention of his own. In 2013, the politics and communications professor at Florida Atlantic University was under fire for a class assignment that brought on a university investigation and concern from then-Gov. Rick Scott.

The professor asked students to write J-E-S-U-S on a piece of paper, place it on the floor and then step on it. The exercise, which was recommended in an FAU textbook, was supposed to be a lesson on the impact of words and symbolism.

At the time, he was the vice chair of the Palm Beach County Democratic Party. He was placed on paid leave for security reasons.

Poole told Fox News the assignment came from another professor and has been done by many professors at various universities around the nation.

"Some people rushed to judgment based on lots of misinformation and few facts," Poole explained. "I never used the word 'stomp,' and the assignment was not anti-religion. It was an exercise that was misinterpreted. If I could do it over again, I would have been more vocal and given more interviews to explain what happened. It was a lesson on the impact of words and symbolism."

One of Poole's students, a devout Mormon, complained to the university and to a local T.V. station.

The university ultimately cleared Poole of impropriety after an investigation. 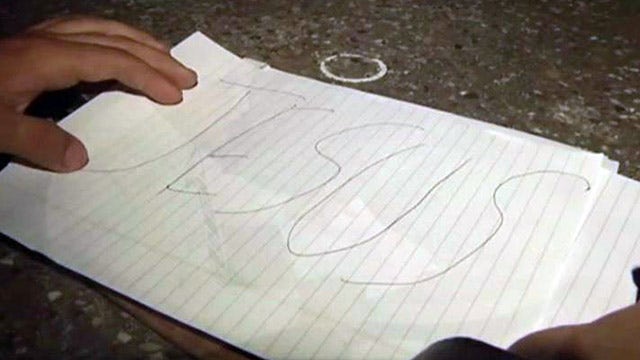 "What a just bonehead thing to do," former Arkansas Gov. Mike Huckabee told "Fox & Friends" at the time, pointing out that the professor would not have used "Mohammed" or another religious leader.

"If you stomp on a flag, if you stomp on a cross, if you stomp on, you know, any particular sensitivity, it's one thing to say I don't believe in that, I don't respect it, but to stomp on it is an act of aggressive behavior toward something and it shows an utter lack of sensitivity...stomping on somebody's holy object or name is a little different," he added.

Huckabee said the student who complained about the assignment should've written "Deandre Poole" on the piece of paper and stepped on that.