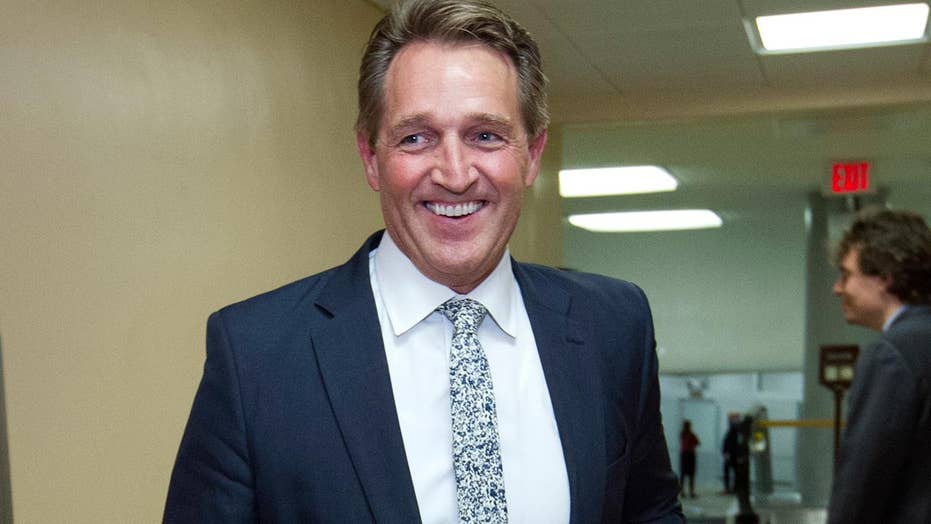 MANCHESTER, N.H. – Retiring Sen. Jeff Flake blasted President Trump as an “erratic leader” in a closely-watched speech in New Hampshire on Friday, fueling more speculation that the Arizona Republican may challenge the president in a 2020 GOP primary.

Asked during a Politics and Eggs appearance at the New Hampshire Institute of Politics if he will challenge Trump in 2020, Flake said “it has not been in my plans to run for president, but I have not ruled it out.”

But he emphasized his belief that someone from his party will take on Trump in the GOP presidential primaries.

"I don’t know who it will be. I think the odds that I will are long,” he said.

Sen. Jeff Flake is one of the most vocal Republican critics of the president. The speaking series is a must stop for White House hopefuls visiting the first-in-the-nation primary state. (Paul Steinhauser for Fox News)

Flake is one of the most vocal Republican critics of the president. The speaking series is a must stop for White House hopefuls visiting the first-in-the-nation primary state.

The conservative senator, who’s retiring at the end of this year rather than face the prospect of losing a primary challenge if he ran for re-election, described himself Friday as “Americanus Nevertrumpus” and said "somebody needs to stand up for traditional Republicanism.”

Flake also warned that “we must turn away from this brand of poisonous politics. The kind of poison that has the president swinging insults like a bad comic at a cheap roast.”

Flake lamented the shape of his party under Trump.

“As a political movement, we’ve been out of minds lately,” Flake said. “It’s like invasion of the body snatchers. What have we done with all the conservatives?”

Accusing Trump of coziness with Russian President Vladimir Putin, Flake said the United States should “not nod and wink at dictators. Nor will we congratulate them for the good job they're doing in their programs of extra-judicial killings. Nor will we host them in the Oval Office. Nor will we hesitate to punish them for attacking our elections.”

Flake described the president as someone who “exudes chaos and dotes on authoritarians.” He also accused him of replacing “the State Department with Twitter” and said Trump “lives in a golden palace when he’s not in the White House.”

Sen. Jeff Flake said “it has not been in my plans to run for president, but I have not ruled it out.” (Paul Steinhauser for Fox News)

Flake received a polite standing ovation at the conclusion of his speech.

Flake served 12 years in the U.S. House before winning election to the Senate in 2012. He would have faced a challenging battle to win re-nomination if he ran for re-election this year.

But Flake told Fox News after his speech that the strong possibility of a primary defeat this year in Arizona didn’t negate his chances of taking on the President in the 2020 primaries.

“Winning a primary in one state doesn’t determine what you can do nationwide,” he said.

Flake admitted that a primary challenge against Trump would be a longshot, but that things could change down the road.

“It’s certainly tough to see today. But if we continue to have elections like we saw in Pennsylvania, a plus-20 Trump district lost to a Democrat. If the midterms turn out on a similar path, then things change rapidly and I don’t think you can take for granted anything about next year and the year following. It’s a long way,” he told reporters.

“It has not been in my plans to run for president, but I have not ruled it out.”

The White House announced this week that Trump will visit New Hampshire on Monday to make a major policy announcement on the opioid epidemic. It will be the president’s first trip to the Granite State since the eve of the 2016 general election.

Asked by Fox News if it was coincidence that the president was showing up in New Hampshire three days after his visit, Flake answered “I doubt that it has anything to do with this visit.”

Trump’s convincing win in the February 2016 New Hampshire GOP presidential primary gave him his first victory toward winning the nomination and eventually the White House.

But two recent polls of New Hampshire Republicans indicated that there may be a growing appetite for a primary challenge.

Former New Hampshire GOP vice chair Matt Mayberry said that “we welcome all primary challengers. No one gets a coronation. It’s not a done deal.”

But conservative state representative David Bates of Windham said he didn’t think there was much of an appetite for a primary challenge, but acknowledged that “a lot can change. We’re awful early in the process.”

Bates said that Flake's “whole message here was nothing but criticism of Trump essentially and it’s hard to understand how he’s proposing to rebuild the Republican Party by doing nothing more than launching criticism at the effective leader of the party right now.”