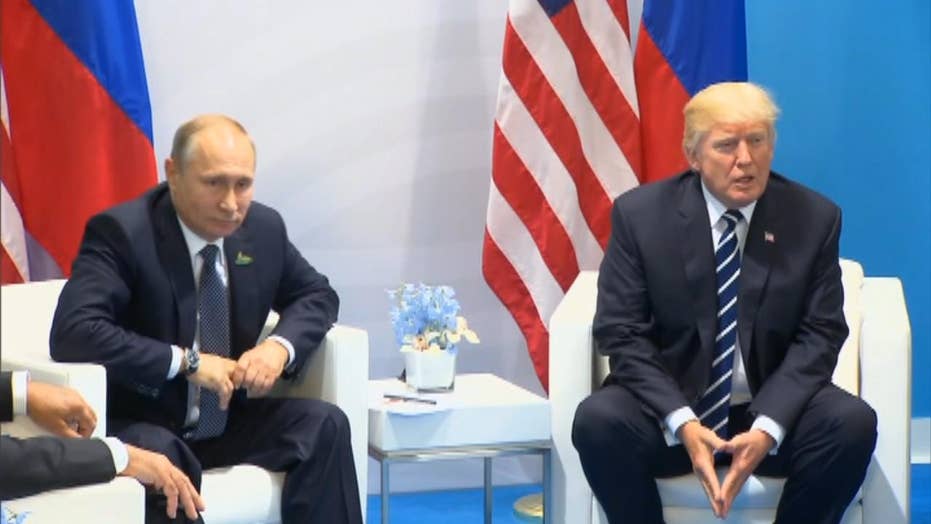 Trump-Putin summit in Helsinki: What to know

What to know about the highly-anticipated meeting between U.S. President Donald Trump and Russian President Vladimir Putin in Helsinki, Finland.

President Trump has arrived in Helsinki, Finland, ahead of a major summit with Russian President Vladimir Putin, after Trump said earlier in the weekend he had "low expectations" but "maybe some good" would come out of the meeting.

The president did not answer shouted questions from reporters as he made his way from Air Force One after landing.

The July 16 meeting is set to be the first official Russian-U.S. presidential summit since 2010. The two leaders last spoke in person in November 2017 at an economic summit in Vietnam.

The summit is expected to touch on a variety of issues, including Russian election meddling, Syria, arms control, Putin's 2014 takeover of Crimea from Ukraine and sanctions. 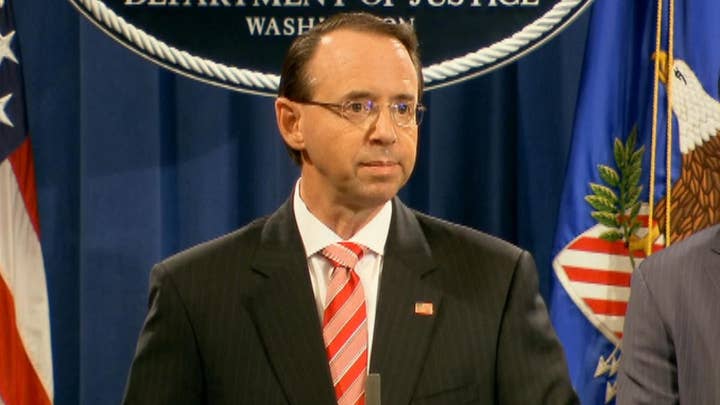 The Justice Department on Friday issued indictments charging several Russian intelligence officers with hacking Democratic targets in the 2016 U.S. presidential election. Schumer said Putin’s "interference in our 2016 elections and our upcoming election is a serious threat to our democracy that transcends political parties. For President Trump to meet with President Putin without expressing the outrage of the American people and securing real progress would be terrible for the United States and the security of our election system."

He added that if the meeting goes on as planned, three things must happen: Trump must not let Putin off the hook for election meddling, he should demand the intelligence officers be sent to the U.S. to face trial, and he should not agree to weaken any current sanctions against Russia.

Trump told CBS News in an interview conducted Saturday that he "hadn't thought" about asking Putin to extradite the indicted Russians.

But after his interviewer, Jeff Glor, brought it up, Trump said, "Certainly I'll be asking about it." He blamed the Democratic National Committee for "allowing themselves to be hacked."

The U.S. has no extradition treaty with Moscow and cannot compel Russia to hand over citizens. Russia's constitution prohibits extraditing its citizens to foreign countries.

But Trump did say Friday he will "absolutely firmly ask" Putin whether Russians interfered with the 2016 election -- which Putin has denied to Trump in the past. 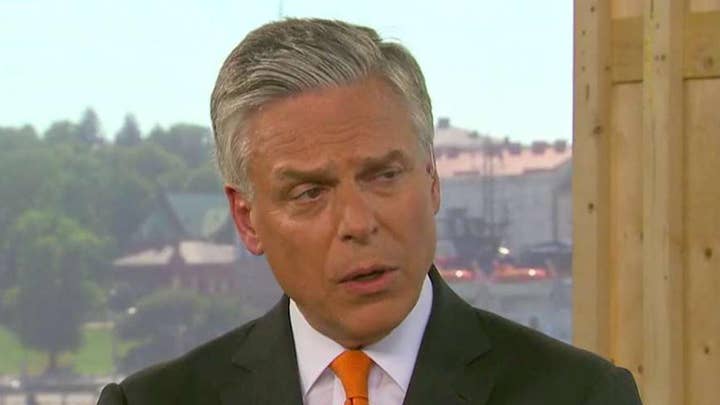 Speaking on "Fox News Sunday," U.S. Ambassador to Russia Jon Huntsman said Trump was "highly unlikely" to recognize Putin's forcible annexation of Crimea, but refused to rule out the possibility.

WATCH: HUNTSMAN SAYS TRUMP IS THE 'CHIEF NEGOTIATOR' IN HELSINKI

Trump himself has been noncommittal on the issue, saying Friday during a press conference with British Prime Minister Teresa May that “we're going to see what happens" at the Helsinki summit.

The president claimed ahead of his summit with Putin that the Russian president would not have invaded Crimea had he been in office, calling the globally condemned annexation an “Obama disaster.” 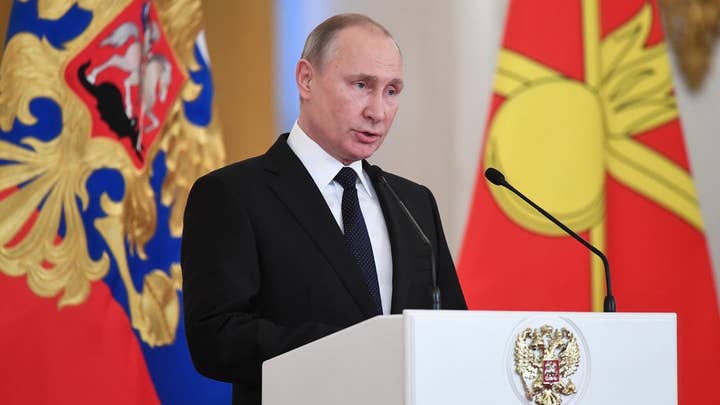 Trump signed an Aug. 2017 law imposing additional sanctions on Russia. The law bars Trump from easing many sanctions without Congress’ approval, but he can offer some relief without a nod from Congress. 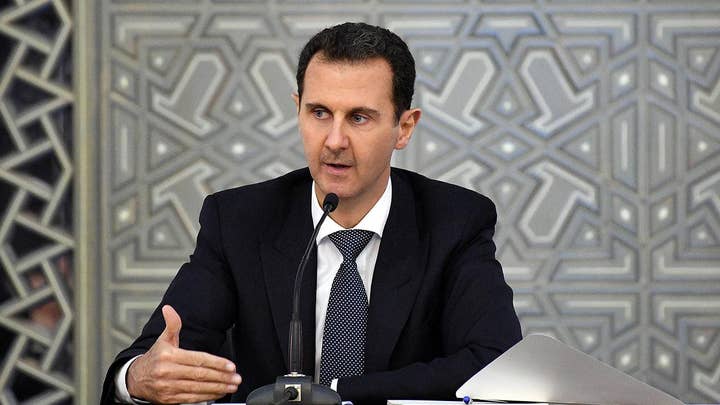 The two leaders also are expected to discuss a tentative deal to move Iranian troops farther from Israel's border with Syria and Jordan, in exchange for allowing access there to Syrian President Bashar al-Assad’s forces.

U.S. officials have worried about the danger of new conflict in Syria between Israel and Iran or Iran-backed forces. The White House also seeks increased Russian oil production—a move on which Russia and the Organization of the Petroleum Exporting Countries (OPEC) have already agreed—to restrict Iranian export earnings.

A National Security Council official told Fox News that Trump spoke to Israeli Prime Minister Benjamin Netanyahu over the weekend to prepare for the Putin meeting. 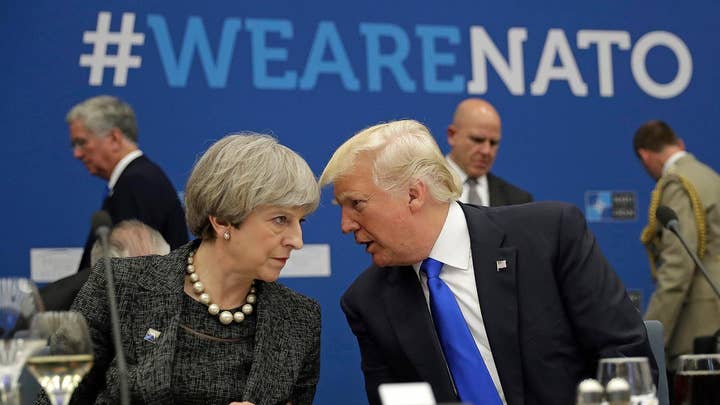 "Yesterday I spoke with U.S. President Donald Trump," Netanyahu said in Israel on Sunday. "We discussed security and diplomatic issues arising from regional developments, chief most among them, of course, Syria and Iran.

"I thanked President Trump for his tough policy against Iran because since this policy has been taken, we have seen a great effect on Iran and inside Iran," he added. "President Trump reiterated with sharp clarity his commitment to the security of Israel and his willingness to help Israel in various realms and, of course, I thanked him for that.''

Putting constraints on Iran could be the top Helsinki priority of Trump and his advisers. U.S. and Russian officials have agreed on a tentative proposal that would keep Iranian forces in Syria 27 miles from Israeli border.

The last major arms agreement between Russia and the US was the 2010 New START Treaty that expires in 2021. Possible extension of the treaty may be discussed.

The U.S. has accused Russia of testing and deploying ground-launched cruise missiles (GLCMs) in violation of the 1987 Intermediate-Range Nuclear Forces (INF) Treaty. The treaty, which was negotiated in part by President Ronald Reagan and which remains in force, prohibits the U.S., Russia, and 11 other former Soviet states from testing and deploying all nuclear and conventional ground-launched ballistic and cruise missiles with ranges of 500 to 5,500 kilometers.

Tensions between the United States and Russia took another turn for the worse in March 2018 after Putin boasted about his country’s development of several next-generation nuclear weapons systems.