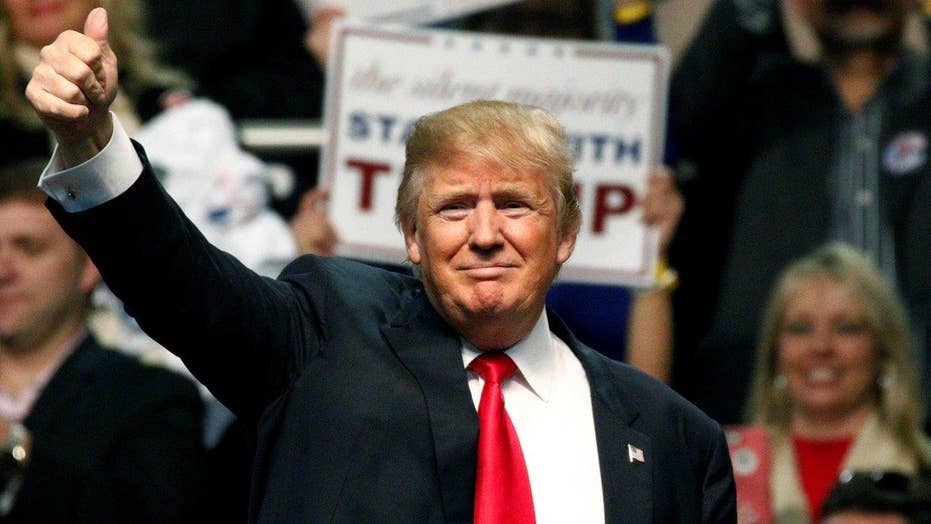 Republican front-runner Donald Trump unveiled his much-anticipated first television ad, and it focuses on two of his most controversial proposals: banning Muslims from entering the U.S. and building a border wall.

The 30-second spot, which is titled "Great Again," opens with a shot of the real estate mogul speaking at a rally and quickly moves on to a montage of news images including President Barack Obama with Hillary Clinton, the suspects in the San Bernardino attack last month, hooded ISIS militants and a ship firing against an unseen enemy.

As the montage plays, a voiceover says: “The politicians can pretend it’s something else, but Donald Trump calls it ‘radical Islamic terrorism.’ That’s why he’s calling for a temporary shutdown of Muslims entering the United States, until we can figure out what’s going on. He’ll quickly cut the head off ISIS and take their oil.”

The ad then switches to immigration, showing an image of dozens of migrants riding a freight train as the caption, “Stop illegal immigration,” appears. That shot is followed by video of unrecognizable figures streaming toward a border fence as the narrator says, “And he’ll stop illegal immigration by building a wall on our southern border that Mexico will pay for.”

It concludes with Trump at a rally vowing that, "We will make America great again."

The campaign allowed the Washington Post to view the ad on Sunday before posting the spot on its website Monday. The ad is scheduled to begin airing in the early battleground states of Iowa and New Hampshire on Tuesday.

Although the reality-TV star has loudly proclaimed his wealth and stated that it grants him an independence none of his rivals have, he has been reluctant to spend a lot of money on advertising, relying instead on his innate ability to cause a media frenzy with outrageous comments. Until this week, the only media buys his campaign has made have been on radio – $300,000 worth in November, according to the Post.

Trump said he believed his rivals have wasted their money spending tens of millions of dollars on TV ads in the fall. But he conceded that he might wind up regretting not joining in the on-air scrum after the GOP race tightened in recent weeks.

He told the Post, “I’m $35 million to $40 million under budget, and to be honest, I don’t think I need [TV ads] because I have such a big lead. But I don’t want to take any chances, and I almost feel guilty not spending money.”

Trump has vowed to spend $2 million a week on advertising during the primary season.

He told the paper that his campaign now has more than half a dozen ads in production, and that the campaign would buy a “major” amount of air time, “and it’s going to go on for months.”