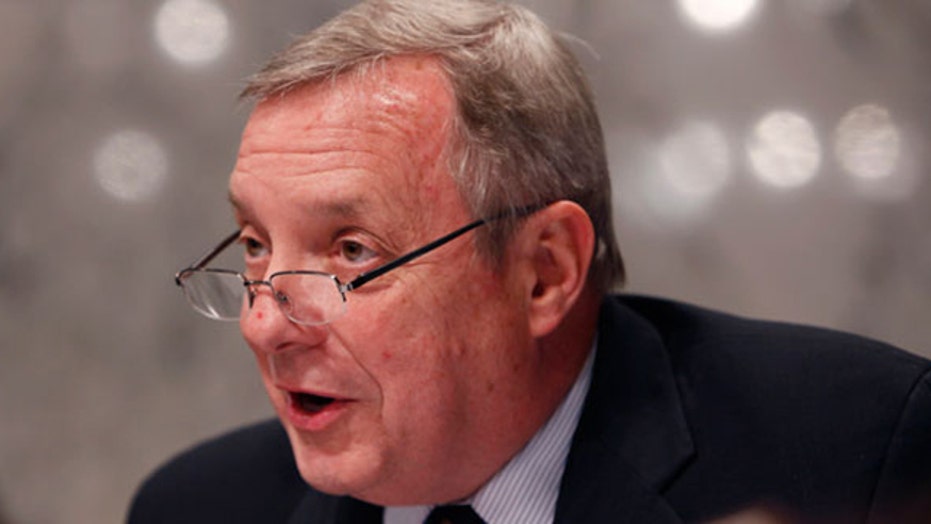 The congressional impasse over Loretta Lynch's nomination for attorney general is taking a nasty turn, with the delay fueling a round of racially charged accusations on Capitol Hill.

For weeks, Democrats have accused their Senate Republican colleagues of using the nomination as an excuse for waging proxy battles on sticky issues like immigration and abortion.

But the simmering frustration boiled over Wednesday as a top Democrat accused the GOP of making Lynch -- who would be the nation's first black female attorney general -- "sit in the back of the bus."

"It is a civil rights milestone that her name has been submitted," said Senate Minority Whip Dick Durbin, who noted 130 days have passed since President Obama tapped Lynch to succeed Attorney General Eric Holder. The Illinois Democrat argued there is "no substantive reason" for the delay, which he likened to being "asked to sit in the back of the bus when it comes to the Senate calendar."

The sharp remark did not go unchallenged.

Responding on Twitter, a Mitch McConnell spokesman posted a photo of U.S. Circuit Judge Janice Rogers Brown, who is black, along with the caption: "Remember that time Sen. Durbin led filbusters [sic] in an attempt to defeat this judge?" Democrats blocked Brown's nomination for nearly two years after President George W. Bush nominated her in 2003.

Lynch's nomination is stalled over a separate matter.

Senate business has ground to a halt over an abortion provision tucked into an anti-human-trafficking bill, with both sides publicly questioning the other's commitment to helping victims of modern-day slavery. Democrats only recently noticed the abortion provision, though it had been in the bill for weeks, and are refusing to advance the bill until it's taken out.

Majority Leader McConnell, in turn, said the vote on Lynch won't move forward until the trafficking bill impasse is broken.

But with one week to go before senators skip town on a two-week Easter recess, the path forward is murkier -- and the language sharper -- than ever.

Republicans insist Democrats are the ones delaying Lynch's confirmation by repeatedly filibustering the trafficking bill.

The Senate Judiciary Committee initially voted 12-8 to approve Lynch, who is currently a U.S. attorney in New York. Mid-April is the earliest she could be confirmed if the chamber does not consider her nomination during its current work period.

Some Lynch supporters have warned Republicans of potential political fallout as the party gears up for the 2016 elections.

"All across the country, women are watching, African-African American women are watching and the civil rights community is watching," Sherrilyn Ifill, president and director-counsel of the NAACP Legal Defense and Educational Fund, told reporters on a conference call organized by the Congressional Black Caucus earlier this week.

Underscoring just how political the standoff has become, even presumptive Democratic presidential hopeful Hillary Clinton weighed in. "Congressional trifecta against women today: 1) Blocking great nominee, 1st African American woman AG, for longer than any AG in 30 years," the former secretary of state said in a series of tweets that also bashed the GOP for "playing politics with trafficking victims."

For their part, Republicans have also sought advantage but have focused their attention on the legislation to combat human trafficking. Once a noncontroversial measure that passed unanimously out of the Judiciary Committee, the bill's bipartisan coalition fell apart after Democrats accused Republicans of legislative sleight of hand by secretly inserting a provision to prevent a victims' compensation fund from covering abortion. Democratic cosponsors said they were unaware the abortion language was in the bill.

"At the very best, they're confessing to incredibly bad staff work," said Sen. Roger Wicker, chairman of the Senate GOP's campaign arm, which has launched robo-calls targeting in-cycle Democratic senators who voted to block the trafficking bill. "Harry Reid and his Democratic caucus don't like to vote on issues. This was true in the last term of Congress and Harry Reid led his caucus off the cliff in so doing."

The saga may be political but it has not been exclusively partisan. Four Democratic senators broke with their caucus this week to back the trafficking bill, and Lynch likewise has the support of at least four Republican senators -- in addition to Sens. Orrin Hatch, Lindsey Graham and Jeff Flake on the Judiciary Committee, Sen. Susan Collins has said she would vote for her.

Under Senate rules, a simple majority is required to confirm most nominees, which means the 46-member Democratic caucus would need the help of at least four Republican senators (in the event of a 50-50 split, Vice President Joe Biden would cast the tie-breaking vote).

Sen. Joe Manchin, a moderate who supports Lynch and voted to end the filibuster of the trafficking bill, said the entire episode reflects poorly on Congress.

"I've been here four years. This is politics, Washington -- it's not personal," the West Virginia Democrat told reporters before meeting with Lynch in his office. "I think Ms. Lynch understands that."