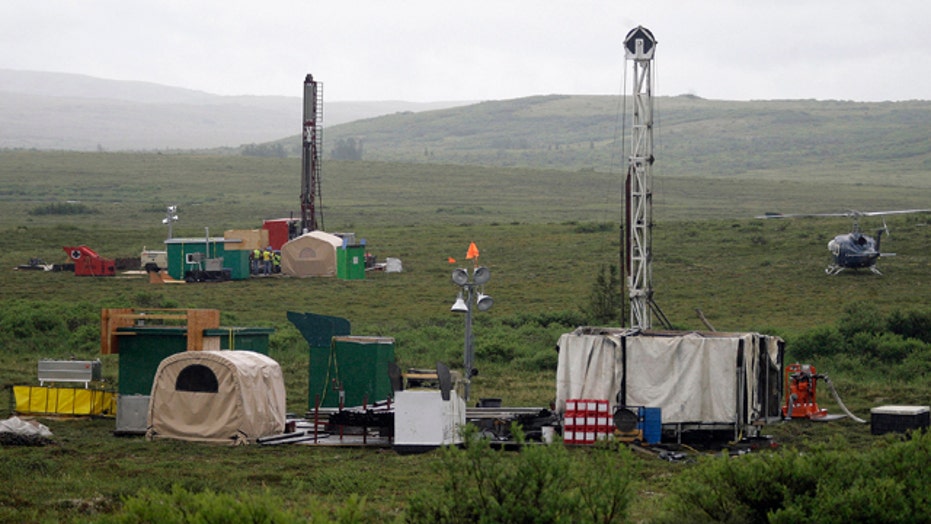 Investors sue EPA over veto of Pebble Mine in Alaska

The Environmental Protection Agency is under fire for a preemptive strike against a massive copper and gold mine in Alaska, where hundreds of billions of dollars and thousands of jobs are at stake.

The controversy centers on Pebble Mine, located 200 miles southeast of Anchorage. It is the largest deposit of copper and gold in North America.

But environmental groups and fishermen, worried about the impact to the world’s most abundant salmon run in Bristol Bay, fought the mine from the beginning.

“It was people from Alaska that requested the EPA come in and take action,” said Tim Bristol, of Trout Unlimited in Anchorage. “We just don’t feel like we’re getting our concerns heard by the state of Alaska.”

The EPA did act, using the 1972 Clean Water Act for the first time ever to stop a mine before the owners even came out with a detailed plan.

The company behind the mine claims the agency went too far.

“The intent of the EPA is to take on an authority that nowhere has Congress given them, to go across America and determine where development should occur and where it shouldn’t occur before anyone ever files a permit,” Pebble Limited Partnership CEO Tom Collier said.

EPA officials have said the agency only got involved after Alaska Native tribes asked for a special Clean Water Act 404(c) veto in 2010. But internal memos suggest some government ecologists wanted to sabotage the mine long before that. One email from 2009 reads, “we should be the ones to shape the discussion. We will need to do tribal outreach, they need to understand the risk.”

Another email listed the pros and cons of an early veto. Among the pros, it said a preemptive strike “can serve as a model of proactive watershed planning.”

Pebble Limited Partnership, along with the state of Alaska, sued the EPA. The inspector general is looking into whether the EPA adhered to laws, regulations, policies and procedures in developing its assessment of potential mining impacts on ecosystems in Bristol Bay.

The House Oversight and Government Reform Committee, chaired by Rep. Darrell Issa, R-Calif., also is investigating. A year into its inquiry, though, the committee is hitting roadblocks. Phil North, a key, now-retired EPA biologist can’t be located. North worked in the EPA’s Kenai office and is a longtime acquaintance of the lawyer who filed the tribe’s request for an EPA veto. Some accuse North of initiating the Pebble Mine veto discussion within the EPA and even helping opponents craft the letter to the agency.

Now, not only is North unavailable to the committee, but two years’ worth of his emails about Pebble Mine are also missing. In response to the oversight committee’s request, the EPA searched North’s laptop and old computer hard drive, and three external hard drives, but could not find any of his electronic documents related to the mine for the period between April 2007 and May 2009.  The EPA says it is still searching.

Geoff Parker, the lawyer who represented the Alaska Native tribes in filing the veto request with the EPA, said North did not begin the 404 (c) veto discussion. Parker told Fox News the impetus for the veto was the lack of a formal mine plan from Pebble Limited Partnership.

The mine was purchased by the Canadian company Northern Dynasty, parent company of Pebble Limited Partnership, in 2001. A few years later, the owners started reaching out to surrounding Native communities hoping to garner support.

In 2011, Northern Dynasty finally issued an economic assessment of the Pebble Mine. It outlined three possible mines ranging from 25 years, up to 78 years. The smallest mine would extract 2 billion tons of material. The largest would mine 6.5 billion tons. The scenarios were used by the EPA in its study of the mine’s potential impacts on the Bristol Bay watershed.

Pebble officials argue their economic assessment was not a mine plan and included none of the extensive mitigation program.

“It was an imaginary mine the EPA invented,” said Washington Examiner columnist Ron Arnold, who has written extensively on Pebble Mine. “You can’t respect anything the EPA says.”

But Bristol said the EPA did exactly the right thing. “The authority is there in the law, and the question we’ve asked is if not in this place, and not on this issue and not at this time, then when are they going to use [the veto]?” Bristol said. “There’s so much at risk.”

Bristol Bay is a $480 million a year fishery. In 2009, it provided 14,000 full and part-time jobs. Pebble officials say they can operate a mine without impacting the legendary salmon runs. The question is, will they ever get a chance to make their case?