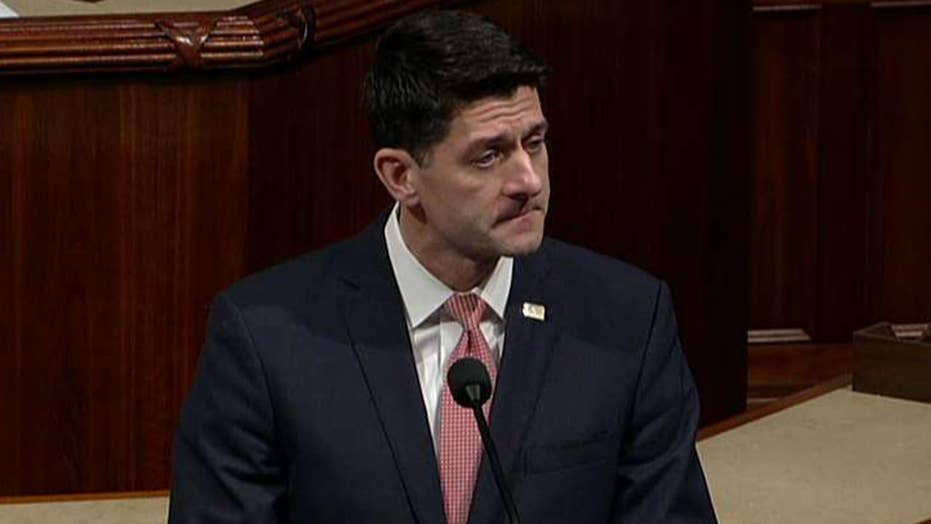 Paul Ryan: No reason for Dems to keep forcing a shutdown

House speaker slams the Democrats over the government shutdown.

Washington lawmakers and officials rolled out plans Saturday to address the government shutdown, including the immediate closure of the Statue of Liberty, as the impact of the federal government technically running out of money is already being felt across the country.

Interior Sec. Ryan Zinke acknowledged that sections of some national parks will be closed this weekend. And public tours of the U.S. Capitol building have been temporarily cancelled.

“Great to meet visitors at the WWII memorial today,” Zinke said in a tweet that included a picture of him with visitors at the memorial on the National Mall. “Not all parks are fully open but we are working hard to make as many areas as accessible to the public as possible.’

However, the biggest impact will be felt Monday if Congress fails this weekend to agree on a spending deal.

The U.S. military will remain fully operational and carry out its “fundamental responsibility” to the United States and its people, Defense Secretary retired Gen. James Mattis said in a department-wide memo Friday night, as the shutdown appeared imminent. However, service members won't get paid until Congress approves the funding.

“We will continue to execute daily operations around the world -- ships and submarines will remain at sea, our aircraft will continue to fly and our warfighters will continue to pursue terrorists throughout the Middle East, Africa and South Asia,” Mattis wrote in the email obtained by Fox News.

“You have my personal commitment that the department’s leadership will do our best to mitigate any financial burdens to you and your family. … Stay alert.”

USAA is reportedly try to help if military members don’t get paid during the shutdown by offering interest-free payroll loans to eligible members.

House and Senate members will be paid during a government shutdown, as provided under the Constitution, but some staffers would be furloughed. In total, almost half the 2 million civilian federal workers will be barred from doing their jobs if the shutdown extends into Monday.

President Trump canceled weekend plans to go to his Mar-a-Lago estate, in Florida, to attend a high-dollar fundraiser Saturday night to commemorate his first year in office.

Congressional lawmakers met Saturday in Washington for rare House and Senate sessions to try to agree on a stop-gap spending bill and reopen the government. But as of early afternoon, no bipartisan talks had taken place, and a compromise did not appear on the near horizon.

The shutdown began overnight after the Senate failed to reach a spending deal, stalled in part over Democrats’ calls to include protections for illegal immigrants brought into the United States as children.

"Political gamesmanship, an unwillingness to compromise, and a lack of resolve on both sides have led us to this point," he said Saturday.

The other federal agencies and services impacted by the shutdown include:

A shutdown plan posted on the Treasury Department's website shows that nearly 44 percent of the IRS' 80,565 employees will be exempt from being furloughed, which would mean nearly 45,500 others agency employees will be sent home -- at the start of the tax filing season and amid sweeping changes made by the new GOP tax law.

Half of the more than 80,000 employees will be sent home. Key programs will continue to function because their funding has ongoing authorization and doesn't depend on annual approval by Congress. But critical disruptions could occur across the vast jurisdiction of HHS programs -- including the seasonal flu program.

States will continue to receive payments for the Children's Health Insurance Program, which covers about 9 million kids. However, long-term funding for the program will run out soon unless Congress acts to renew it.

Many of the nearly 115,000 Justice Department employees have national security and public safety responsibilities that allow them to keep working during a shutdown. Special counsel Robert Mueller's team investigating Russian meddling in the presidential election will also continue working. His office is paid for indefinitely.

The more than 95,000 employees who are "exempted" include most of the members of the national security division, U.S. attorneys, and most of the FBI, Drug Enforcement Administration, Bureau of Alcohol, Tobacco, Firearms and Explosives, U.S. Marshals Service and federal prison employees.

Many State Department operations will continue during a shutdown. Passport and visa processing, which are largely self-funded by consumer fees, will not shut down. The agency's main headquarters in Washington, in consultation with the nearly 300 embassies, consulates and other diplomatic missions around the world, will draw up lists of nonessential employees who will be furloughed.

Department operations will continue through the weekend and staffers will be instructed to report for work as usual on Monday to find out whether they have been furloughed.

A department spokesman said nearly 90 percent of Homeland Security employees are considered essential and will continue to perform their duties during a government shutdown.

That means most Customs and Border Protection and Transportation Security Administration workers will stay on the job, according to the department's shutdown plan, dated Friday.

Immigration and Customs Enforcement will be staffed at about 78 percent, meaning more than 15,000 of the agency's employees will keep working. The Secret Service, also part of Homeland Security, will retain more than 5,700 employees during the shutdown.

In addition to Zinke’s comments Saturday, the Interior Department said national parks and other public lands will remain as accessible as possible. That position is a change from previous shutdowns, when most parks were closed and became high-profile symbols of dysfunction.

Spokeswoman Heather Swift said the American public -- especially veterans who come to the nation's capital -- should find war memorials and open-air parks available to visitors. Swift said many national parks and wildlife refuges nationwide will also be open with limited access when possible.

Still, the National Park Service announced that both New York sites would be closed Saturday "due to a lapse in appropriations." The park service said the closure of the Statue of Liberty National Monument and Ellis Island was effective immediately and until further notice.

More than half -- 34,600 -- of the Department of Transportation's 55,100 employees will continue working during a shutdown. The bulk of those staying on the job work for the Federal Aviation Administration, which operates the nation's air traffic control system.

Controllers and aviation, pipeline and railroad safety inspectors are among those who would continue to work.

Fox News' Jennifer Griffin and Chad Pergram and The Associated Press contributed to this report.