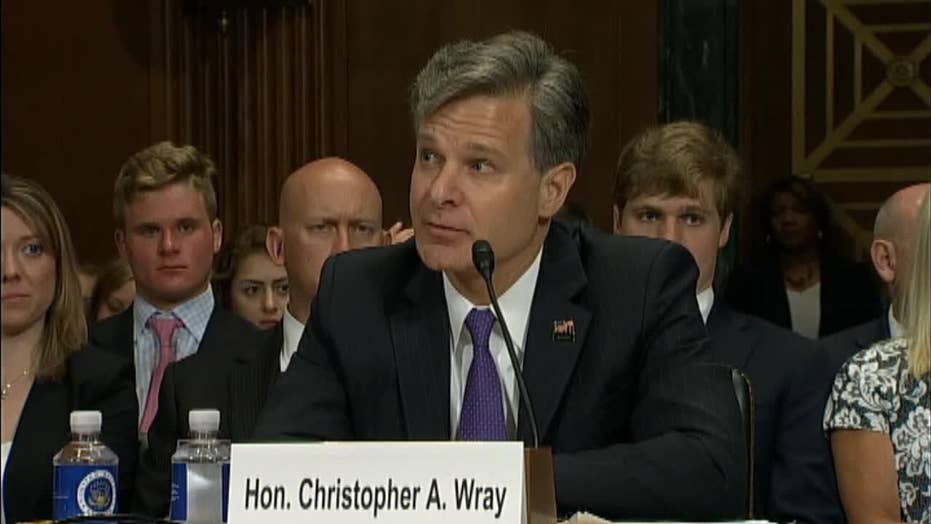 Former FBI Directors Robert Mueller and James Comey provided a major source of commentary for Chris Wray during his confirmation hearing. So what did he have to say about them?

Christopher Wray, President Trump’s pick for FBI director, vowed Wednesday to uphold “strict independence” at the bureau as his confirmation hearing became the latest stage for the Russia investigation drama.

Seeking to replace an FBI director fired by the president amid tensions over that investigation, Wray testified that he'd conduct his job "without regard to any partisan political influence."

“I believe to my core that there’s only one right way to do this job,” Wray told the Senate Judiciary Committee. “And that is with strict independence. By the book. Playing it straight. Faithful to the Constitution."

Trump announced his selection of Wray to lead the FBI last month. The confirmation hearing, though, was overshadowed at times by the latest Russia-related revelations concerning Donald Trump Jr.

Asked by Graham if Trump Jr. should have taken the meeting, Wray said he didn’t have enough information. “I’m not really in a position to speak to it.”

But when pressed again, Wray said: “To the members of this committee, any threat or effort to interfere with our elections, from any nation state or any non-state actor, is the kind of the thing the FBI would want to know.”

The emails have emboldened the president’s critics who say they show clear evidence of collusion between the Trump campaign and Russia.

Graham also asked Wray if he considers Russia a friend or enemy. “I think Russia is a foreign nation that we have to deal with very warily,” Wray replied.

Wray, 50, would inherit the nation's top law enforcement agency at a particularly challenging time. Trump abruptly fired predecessor James Comey during its investigation into Russian meddling in the U.S. presidential election and potential coordination with the Trump campaign.

The probe was later handed to special counsel Robert Mueller.

With pressure only mounting on Mueller to get to the bottom of the issue, Wray also declined to adopt Trump's past characterization of the investigation as a "witch hunt," when asked during Wednesday's hearing.

More broadly, he vowed to follow the facts as FBI director if confirmed.

“I would just say anybody who thinks that I would be pulling punches as the FBI director sure doesn’t know me very well," he said.

Comey testified during a Senate hearing last month that Trump repeatedly encouraged him to conclude the Russian investigation.

“If I am given the honor of leading this agency, I will never allow the FBI’s work to be driven by anything other than the facts, the law, and the impartial pursuit of justice,” Wray said. “Period.”

Comey also testified that Trump told him: “I need loyalty, I expect loyalty.”

Wray said Wednesday no one in the White House has requested a loyalty pledge from him.

“My loyalty is to the Constitution, to the rule of law and to the mission of the FBI,” he said. “And no one asked me for any kind of loyalty oath at any point during this process, and I sure as heck didn’t offer one.”

Wray was also asked to weigh in on Comey’s decision to deliver a press statement in July of last year to say he didn’t believe Hillary Clinton shouldn’t face criminal charges over her email practices while serving as secretary of state.

Rod Rosenstein, the deputy attorney general, wrote in his May letter recommending the firing of Comey that he believed the FBI director was wrong to hold a press conference to "release derogatory information about the subject" of a declined criminal investigation.

“I can’t imagine a situation where as FBI director I would be giving a press conference on an uncharged individual, much less talking in detail about it," Wray said Wednesday.

With Wray announced as the nominee in a curt, early morning tweet by Trump, and without the pageantry of a Rose Garden ceremony, the hearing offered the first public, close-up look at Wray's background.

“It’s a demanding job that requires a keen understanding of the law, sound management skills, calm under significant pressure, and a level head,” Senate Judiciary Committee Chairman Chuck Grassley, R-Iowa, said at the beginning of the hearing. “From what I’ve seen so far from meetings with Mr. Wray and from looking at his record, he appears to possess these qualifications.”

Dianne Feinstein, D-Calif., the top Democrat on the committee, said the FBI “is and must remain an independent law enforcement organization.”

Feinstein also asked Wray if he discussed Comey or his firing at the White House, Justice Department or FBI.

“Senator Feinstein, I did not discuss those topics at all with anyone in the White House,” Wray said.

He said Rosenstein, who approached him about the job, remarked to him that with the special counsel dealing with the issue “it made for a better landscape for me to consider taking on this position.”

Feinstein said she wanted to hear from Wray about his role in reviewing memos about the Bush-era enhanced interrogation program. She noted how he served as the deputy attorney general’s most senior adviser when the office of legal counsel issued the so-called “torture memos” in 2002 and 2003.

“My view is that torture is wrong," Wray said. "It is unacceptable. It is illegal. And I think it’s ineffective.”

Wray said he would continue the policy of his predecessors that the FBI would not “use of any techniques of that sort.” He said that when he was assistant attorney general for the criminal division, he investigated and prosecuted a CIA contractor who went “overboard and abused a detainee that he was interrogating.”

During his opening statement, Grassley said he believes “a cloud of doubt hangs over the FBI’s objectivity.” He pointed to questions about FBI Deputy Director Andrew McCabe, citing how McCabe’s wife ran as a Democrat for the Virginia state Senate and accepted almost a million dollars from Virginia Governor Terry McAuliffe’s “political machine.”

“Gov. McAuliffe is a longtime friend and fundraiser for the Clintons and the Democratic Party,” Grassley said. “Deputy Director Andrew McCabe met in person with Gov. McAuliffe about his wife’s political plans.”

Feinstein acknowledged to reporters on Wednesday after hearing his testimony that she will support Wray’s nomination.