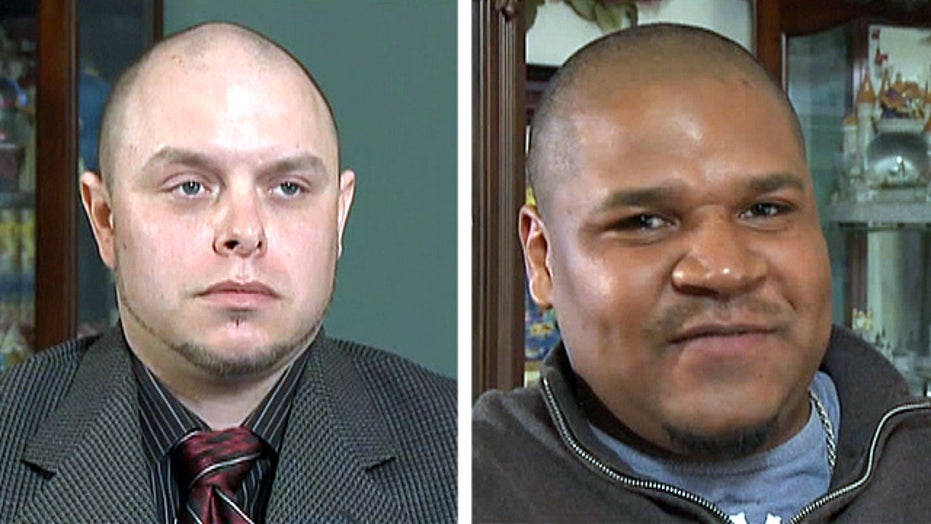 Utah allows adoption with consent of one parent

A dozen men are suing the state of Utah in federal court because of a law that allows mothers to put their babies up for adoption without the biological father's consent, or sometimes even knowledge. The civil rights lawsuit claims the Utah Adoption Act has resulted in what amounts to "legalized fraud and kidnapping."

Wes Hutchins, the attorney for the men, says he is very pro-adoption, having served as a president of the Utah Adoption Council and currently serving as president of the Utah Council for Ethical Adoption Practices. But, he said, "adoptions need to be done ethically, legally and constitutionally. And above all, they need to be done with the consent and the knowledge and the awareness of both biological parents."

Some of the plaintiffs shared their emotional stories with Fox News.

"Well, I thought I was going to have a son," Nikolas Thurnwald recalled. He said he was thrilled by the idea of being a father while he and his live-in girlfriend, in 2004, waited for their child to be born. "We were together all the way up until the last couple of days before the birth."

Then Thurnwald called his girlfriend, "to see if she maybe wanted to go to the movies, and her co-worker answered the phone at the department store that she was working at and basically let me know that she was in the hospital having our baby."

Thurnwald immediately called the hospital. "They patched me through to her ... and I asked her if she was giving our son up for adoption. And she said, 'Kinda.' I said ‘there is no kinda, what are you doing? Why are you doing this?’ And she says, 'Look I gotta go.' I dropped to my knees, dropped my phone that I was holding and just started crying. A grown man on a construction site crying his eyes out."

He immediately drove to the hospital where he was told his girlfriend was not a patient. He explained that he had just spoken to her on the phone, "and they said, 'Sir, you need to leave before we call the police'."

After 10 years and more than $30,000 in legal fees, Thurnwald lost his bid to gain custody.

Court filings in the civil rights suit charge that Utah's laws have prompted women from all over the country to move to Utah so they can give birth and secretly place the baby up for adoption.

Plaintiff and Army veteran Christopher Carlton said that in 2010, his girlfriend told him their son had died shortly after birth. She would not tell him where the child was buried. After he sued to find out, the Pennsylvania mother admitted she had traveled to Utah to give birth and give the baby up for adoption. Nearly a year later, she told Carlton the baby, now living with an adoptive family, was actually a girl and not a boy.

The civil rights lawsuit seeks not only monetary damages for the fathers, but also a finding that the Utah Adoption Act is unconstitutional. The Utah attorney general's office and former Utah Attorneys General Mark Shurtleff and John Swallow are named as defendants in the suit, along with several other unnamed state officials.

Missy Larson, spokeswoman for current Attorney General Sean Reyes, who is not named in the suit, told Fox News he would make no official comment or statement about the case while it is in the courts. She did point out, "The job of the attorney general is to uphold the laws as they are written." Larson said the Utah solicitor general had previously reviewed the Utah Adoption Act and found no constitutional conflict, and the law is again being reviewed internally at this time. She also pointed out that if the law needs to be re-written, that would be up to the state legislature.

Hutchins responded: "If you look at the attorney general's website they are charged with protecting children from child abuse. The ultimate form of child abuse is to take a child away from a biological family that loves and cares for them."

The suit also alleges that some Utah adoption agencies coach women on how to keep the adoption secret from the biological father. Among the evidence cited are secretly recorded phone conversations between adoption representatives and a woman posing as the sister of someone who wants to give her baby up.

In one call, a female adoption representative at the Adoption Center of Utah tells the caller, "Utah has the best adoption laws because you don't have to say who the father is. Even if the father doesn't sign the papers, you can still put the baby up for adoption."

In another, the undercover woman asks, "Do I have to tell him I gave the baby up for adoption? Could I just say we had a really bad accident?" The adoption representative responds, "You don't have to tell him anything."

Plaintiff William Bolden said he was able to briefly hold his son in the hospital only to find out later his girlfriend had given the child up to LDS Family Services, an adoption agency run by the Church of Jesus Christ of Latter-day Saints.

He knew something was wrong when, "I wanted her to send me pictures and she told me her phone was broken so she couldn't send me pictures. A couple of weeks passed and I knew she had already placed him with somebody else."

Bolden lost his son even though he told LDS Family Services he wanted custody. He believes the adoption agency coached his girlfriend. "I believe they told her the things she needed to do to make it happen as far as not accepting money from me, keeping me away from the birth and not giving me pictures, all that other stuff. Just keeping me in the dark about what was going on."

The plaintiffs' attorney, Hutchins, himself a practicing Mormon, believes some adoption agencies and representatives are influenced by the church's Handbook 2, Policies on Moral Issues. It states, "When the probability of a successful marriage is unlikely due to age or other circumstances, the unmarried parents should be counseled to work with LDS Family Services to place the child for adoption."

In a statement to Fox News, The Church of Jesus Christ of Latter-day Saints said: "The desire of the Church is for children to be raised in an environment that is best for their physical and spiritual growth. LDS Family Services has, for many years, helped with placing children in homes where a mother and father teach and live the gospel of Jesus Christ. Utah's laws regarding adoption are made and upheld by the state's governing bodies."

The biological children of both Will Bolden and Nikolas Thurnwald were adopted out by LDS Family Services. Bolden's individual lawsuit to gain custody of his biological son, who will be 3 in March, remains undecided in the Utah Supreme Court. "I love my son and I will fight for him until I have no money. Until there is no chance for me to get him back, I will be fighting," he said.

Hutchins said the time it takes for these individual cases to be resolved plays into the agencies' hands. "They rely on the fact that they can tie these children up in litigation long enough that they will form a bond with the adoptive parents." Even if a father were to win custody, it could mean years of therapy for a child being introduced to someone who in their eyes is a complete stranger.

"There's a lot of people that know that this is not only unethical, immoral, but it's downright wrong," Thurnwald said. He said Utah's adoption system treats unwed fathers “like they're scum -- like they don't have rights at all as far as having a relationship with their children.”

He added: “I know I could have done well for my son."