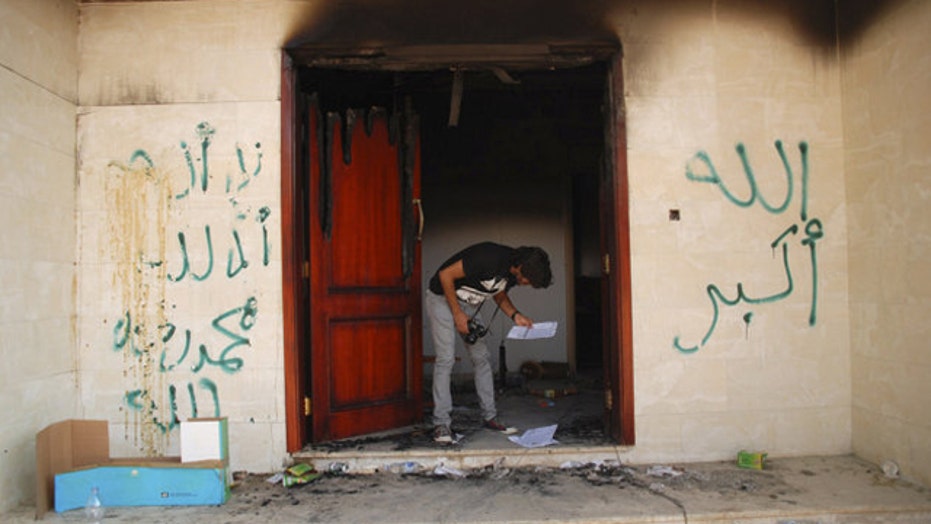 Secretary of State Hillary Clinton will testify Wednesday before House and Senate committees on the Libya terror attack. As she prepares to deliver her months-in-the-waiting account, a string of unanswered questions continues to hang over her department and the entire national security team.

Fox News has learned that U.S. Marines who were part of a FAST (Fleet Antiterrorism Security Team) responding to Libya were told by the State Department to deplane, change out of their U.S. military uniforms and put on civilian clothes before flying to Tripoli -- a decision that delayed them from launching by approximately 90 minutes, according to senior military officials who briefed Congress. The FAST team, which was made up of about 50 Marines, was ordered by Defense Secretary Leon Panetta to launch from Rota, Spain, the night of the attack on the Benghazi diplomatic mission.

Members of the Special Operations teams sent from Fort Bragg, N.C. and the Commander’s In Extremis Force in nearby Croatia say they were never given permission to enter Libya, even though some were just a short flight away in Europe.

The Accountability Review Board appointed by Clinton and overseen by Adm. Mike Mullen and former Ambassador Thomas Pickering concluded: “The Board members believe every possible effort was made to rescue and recover Ambassador Stevens and Sean Smith. The interagency response was timely and appropriate, but there simply was not enough time for armed U.S. military assets to have made a difference.”

Why was it necessary for those Marines to change into civilian clothing when it was apparent that U.S. government officials were in imminent danger?

Did the State Department ever secure permission from Libya and Italy to fly armed units and flights to Libya the night of the attack?

U.S. military planes based at both Sigonella and Aviano, Italy, must have permission from the Italian government on a case-by-case basis to take off armed. According to former U.S. military commanders, this is an issue that can stymie rescue efforts, if the State Department does not manage to secure the appropriate permissions from the host government -- Italy, in this case. If those permissions were not secured, is it safe to assume the State Department was reluctant to ask the U.S. military to help in Libya before, during or after the Sept. 11 attack?

Were they concerned about a Black Hawk Down-type situation, losing military assets trying to help with a rescue?

Defense Department spokesman George Little says that the FAST team would not have been in Libya in time to save any lives, and any delays to change out of military uniforms likely did not make a difference since all surviving State Department personnel left the consulate for the CIA Annex about an hour and 45 minutes after the attack began at 9:42 p.m. Libyan time.

However, even according the ARB timeline, Ambassador Chris Stevens’ body was not returned to the Benghazi airport until 8:25 a.m. on Sept. 12.

He remained missing for nearly 11 hours.

Should more have been done to try to retrieve his body from the Benghazi hospital?

The official Defense Department timeline and the independent Accountability Review Board state that the European Commander in Extremis Force that AFRICOM commander Gen. Carter Ham ordered to Sigonella from a training mission in Europe arrived at 7:57 p.m. on Sept. 12 (nearly 22 hours after the attack began). Fox News has reported it was training in nearby Croatia, a short flight away.

Fox News has learned that a 12-member alert force from the CIF team who were staged to Sigonella from Croatia arrived at the staging base in southern Italy within several hours of being alerted of the attack -- but they were not given permission to move into Libya.

Fox News has also learned that the team of Tier One special operators who took off from the United States landed in Sigonella air base in southern Italy at about 7:30 a.m. local time – an hour before Stevens’ body was retrieved.

And yet the official Defense Department timeline says that this National Mission Force team did not arrive in Sigonella until 9:28 p.m. Libyan time on Sept. 12 (nearly 24 hours after the attack began).

Why the discrepancy in the official Defense Department timeline and the time that those special operators say they landed in Sigonella from the United States?

The quick reaction force that was mobilized from the Libyan capital was made up of five Americans -- including Glen Doherty, who was on contract with the CIA’s Global Response Staff (or GRS), and two Delta Force special operators who were in Libya on a separate assignment. That was all the hastily rented plane could hold, according to the State Department Review Board. Stevens used the cellphone of Regional Security Officer 1, who is currently recovering at Walter Reed. Stevens was speaking with the Embassy in Tripoli at 9:50 p.m. from the safe room where he and RSO1 had retreated for safety.

When the reaction team left Tripoli for Benghazi several hours after the attack began, they were told by one of the senior U.S. security officials at the Embassy that there would be “fast movers above Benghazi” when they arrived. “Fast movers” is a reference to military jets used to fly over a combat situation. It was a reference to F-18s, F-15s or F-16s that would have been flown in from Europe.

The team that left for Benghazi assumed they would have air cover when they landed. Instead, they got held up at the Benghazi airport without transportation and did not arrive at the CIA Annex to help with the evacuation until 5 a.m. local time on Sept. 12 (more than seven hours after the attack had begun.) Air support never came.

Doherty, a former Navy SEAL, was a part of that team and was killed by a mortar while he and Tyrone Woods manned defensive positions on the roof. Woods did not die immediately from the mortar attack. He bled out over several hours, according to one eyewitness who was there that night.

Fox News has also learned that some of Stevens’ in-country security detail did not accompany him to Benghazi on Sept 11.

Why was the “fast movers” team never sent from Italy?

Why did highly trained members of the diplomatic security service remain behind in Tripoli, and why did Stevens take only a skeletal security team to Benghazi?

The Board found that Stevens made the decision to travel to Benghazi independently of Washington. His plans “were not shared thoroughly with the Embassy’s country team, who were not fully aware of planned movements off the compound,” according to independent investigators. Why the secrecy?

WHAT WAS THE CIA DOING IN BENGHAZI?

The U.S. post in Benghazi consisted of two parts – the diplomatic consulate and a CIA Annex. Details about the extent of the annex’s work was unclear.

“General Ham did not have complete visibility of the extent and number of government personnel in Benghazi in the event that a NEO (Noncombatant Evacuation Operation) was required,” according to a report by Sens. Joe Lieberman and Susan Collins, even though the Defense Department “assumes responsibility for evacuation of diplomatic personnel, U.S. citizens...in crises. AFRICOM was responsible for working with Department of State officials in Libya to develop and coordinate Noncombatant Evacuation Operations (NEO) plans for the diplomatic facilities in the region.”

What was the CIA doing in Benghazi establishing one of its largest hubs in North Africa without informing AFRICOM commander Carter Ham?

Why did Stevens feel the need to be in Benghazi on Sept. 11? He went to the CIA Annex for a briefing the day before. And why did communications specialist Sean Smith travel to Benghazi the week before Stevens’ arrival if he was simply going to Benghazi to attend the opening of an “American corner” at a local school, as reported in the ARB?

What was the meeting with the Turkish envoy about on the night of Sept. 11 -- has the FBI interviewed the Turkish diplomat?

The Embassy and Stevens were in the process of shutting down the Benghazi mission, and the State Department had authorized it to be closed in December 2012.

“Another key driver behind the weak security platform in Benghazi was the decision to treat Benghazi as a temporary, residential facility, not officially notified to the host government, even though it was also a full time office facility,” the ARB report concluded.

Rep. Ted Poe, R-Texas, who was just made the chairman of the House Foreign Affairs Subcommittee on Terrorism, Non-Proliferation and Trade, has been demanding answers from the Pentagon about what U.S. personnel were doing in Benghazi and has been frustrated about the administration’s unwillingness to answer his questions.

“There are a lot of contradictions and inconsistencies in these reports,” Poe told Fox News.

He has asked whether the U.S. or its allies furnished any rebel groups in Libya with weapons during the uprising against Muammar Qaddafi -- in particular Ansar al-Shariah, the group largely believed to be responsible for the consulate attack.

Poe, in an interview with Fox News, asked “did we help facilitate in some way, or know about the movement of weapons to Libyan rebels and did we help, know about, or get involved in the weapons movement from Libya to Syria?”

WHAT DID THE NATIONAL COMMAND AUTHORITY AUTHORIZE?

Undersecretary of State for Management Patrick Kennedy was running the Operations Center overseeing the rescue on Sept. 11 at the State Department. As the attack began, the Tactical Operations Center in the U.S. mission Benghazi “triggered an audible alarm, and immediately alerted the U.S. Embassy in Tripoli and DS (Diplomatic Security) headquarters in Washington. These notifications were quickly transmitted from the Department of State to the Department of Defense. DS headquarters maintained open phone lines with the DS personnel throughout the attack.”

But the defense secretary and Joint Chiefs Chairman Martin Dempsey were not alerted to the attack for 50 minutes, and they in turn did not raise the issue with the president until a previously scheduled meeting with Obama at the White House at 5 p.m. -- one hour and 18 minutes after the attack began.

“That same DS agent (at the consulate) also called the annex to request assistance from security personnel there, who immediately began to prepare to aid the U.S. personnel at the diplomatic facility,” according to the Senate Homeland Security Committee’s report.

The CIA response team from the annex arrived at the consulate which was one mile away within 25 minutes. CIA Director David Petraeus was in the CIA operations center overseeing the rescue that night and did not leave until all U.S. personnel were accounted for. Petraeus flew to Tripoli in subsequent weeks to interview the station chief and others about what happened that night and found there was no delay in rescue efforts.

The Accountability Review Board, we have since learned, did not interview all members of the CIA’s Global Response Staff who were at the CIA Annex that night, at least one of whom says his team was not given permission at first to go and help at the “consulate” after security personnel put out immediate calls for help -- a charge the CIA refutes.

The diplomatic security officer who repeatedly re-entered the smoke-filled premises to try to find Stevens also says he was not interviewed by Mullen and Pickering’s team. He says the senior leadership at the State Department did not make them available to the Accountability Review Board.

Where was John Brennan, the president’s chief counterterrorism adviser, the afternoon of the attack?

Are there minutes from the Situation Room?

What was his advice to the president that afternoon and evening?

Was anybody at the CIA Annex told to stand down or to wait before responding to the consulate?