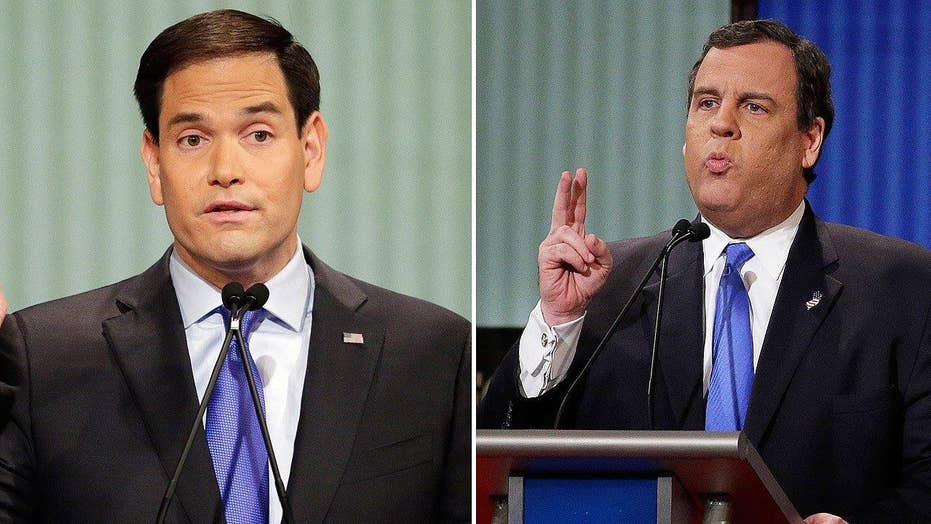 Republican presidential candidate Chris Christie launched his campaign under the motto, “telling it like it is.”

But a review of some of the New Jersey governor's statements Thursday night during the Fox Business debate – particularly his stinging rebuttal of Marco Rubio's attack – shows he still may be bending the truth with his straight talk.

The two candidates’ testy exchange erupted on the FBN debate stage when Rubio accused the New Jersey governor of holding liberal views, “whether it is Common Core, or gun control, or the appointment of Sonia Sotomayor or the donation he made to Planned Parenthood.”

Christie fired back by simply denying it.

“Let’s get the facts straight. First of all, I didn’t support Sonia Sotomayor,” he said of the Supreme Court justice.

But a closer look at Christie’s past seems to suggest otherwise.

According to Politifact, Christie did initially say in 2009 -- when he was running for New Jersey governor -- that Sotomayor wouldn't have been his choice.

But he later issued a statement voicing support that same year, according to PolitickerNJ.

“After watching and listening to Judge Sotomayor's performance at the confirmation hearings this week, I am confident that she is qualified for the position of Associate Justice of the U.S. Supreme Court," Christie wrote. "Elections have consequences. One of those consequences are judicial appointments. While Judge Sotomayor would not have been my choice, President Obama has used his opportunity to fill a seat on the Supreme Court by choosing a nominee who has more than proven her capability, competence and ability. I support her appointment to the Supreme Court and urge the Senate to keep politics out of the process and confirm her nomination.”

Christie, though, argued Friday that his 2009 statements did not count as support and that he was only calling on the Senate to give the nominee a straight up-or-down vote.

"‎What I said about Sonia Sotomayor was that she deserved an up-or-down vote, but that she was not the type of justice I would select if I were president," he told MSNBC. "That's hardly supporting someone."

Christie also pushed back Friday on Rubio's claims that he once made a donation to Planned Parenthood, telling Fox News he did not.

But in a 1994 Newark Star-Ledger story, Christie is quoted saying, “I support Planned Parenthood privately with my personal contribution, and that should be the goal of any such agency, to find private donations.”

Now his camp says he never made the donation. Planned Parenthood, a non-profit, does not disclose its private donors’ information.

True or not, Rubio’s allegations nevertheless gave Christie an opening to land a memorable zinger Thursday night, as the governor accused Rubio of doing the same thing he once accused Jeb Bush of -- attacking a rival just to boost his own poll numbers.

“I stood on the stage and watched Marco … rather indignantly, look at Governor Bush and say, ‘someone told you that because we're running for the same office, that criticizing me will get you to that office,’” he said. “It appears that the same someone has been whispering in old Marco's ear too.”