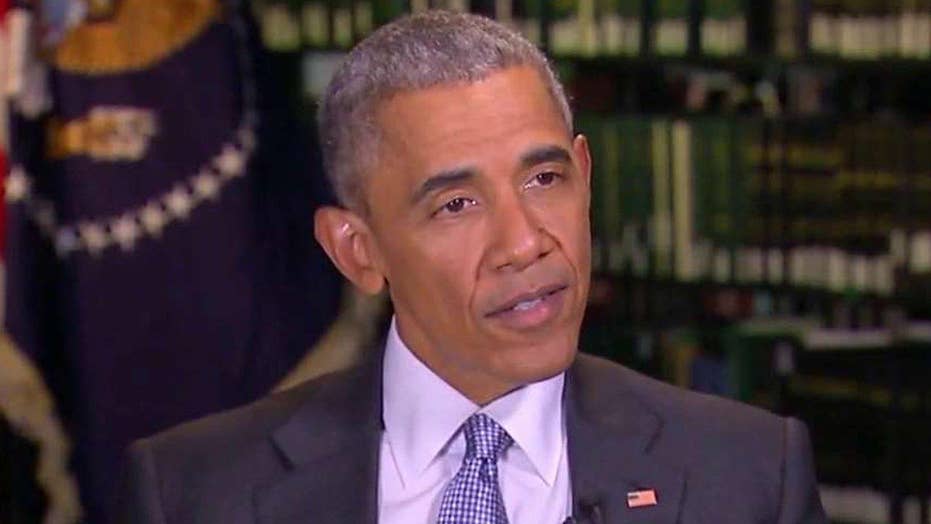 The president discusses his committment to his Supreme Court pick, his handling of global terrorism and Hillary Clinton's email server with Chris Wallace

President Obama repeatedly vowed there would be no political influence over the Justice Department’s investigation into Hillary Clinton’s use of a private email server while secretary of state -- in a wide-ranging interview with “Fox News Sunday” in which he also ardently defended his efforts to defeat the Islamic State and other terror groups amid criticism about his perceived indifference.

“I guarantee that there is no political influence in any investigation conducted by the Justice Department, or the FBI, not just in this case, but in any case,” Obama said.” “Nobody is above the law. How many times do I have to say it?”

Obama praised Clinton’s tenure running the State Department from 2009 to 2013 and said he still doesn’t think the emails to and from her private server breached national security.

However, he acknowledged, as Clinton has done, that her using the private server was not a good idea, in part after revelations that roughly 2,000 of the emails included classified information.

“There’s carelessness in terms of managing emails, that she has owned, and she recognizes,” Obama told Fox News' Chris Wallace, in his first interview with the cable network since 2008.

Obama defended efforts to stop the growing international terror threat and his response to terrorists.

“My No. 1 job is to protect the American people,” Obama said in the interview, taped Friday at the Unversity of Chicago Law School, where he was a professor. “My No. 1 priority right now is defeating ISIL (the Islamic State.) … I’m the guy who calls the families, or meets with them, or hugs them, or tries to comfort a mom, or a dad, or a husband, or a kid, after a terrorist attack. So let’s be very clear about how much I prioritize this: This is my No. 1 job.”

Obama also defended his actions after several deadly attacks, including playing a round of golf after American James Foley was beheaded and going to a baseball game in Cuba after the Brussels terror bombings last month, for which the Islamic State has claimed responsibility.

“In the wake of terrorist attacks, it has been my view consistently that the job of the terrorists, in their minds, is to induce panic, induce fear, get societies to change who they are," he said. "And what I’ve tried to communicate is, 'You can’t change us. You can kill some of us, but we will hunt you down, and we will get you.'

“And in the meantime, just as we did in Boston, after the marathon bombing, we’re going to go to a ballgame. And do all the other things that make our life worthwhile.  … That’s the message of resilience. That we don’t panic, that we don’t fear, we will hunt you down and we will get you.”

The president also dug in on his position that the GOP-controlled Senate should vote on whether to confirm his nomination to the Supreme Court, Merrick Garland.

He argued lawmakers have a constitutional responsibility and suggested that Garland would pass the confirmation process.

“I think that if they go through the process, they won’t have a rationale to defeat him,” Obama said.

The president nevertheless acknowledged that congressional Republicans are in a tough election-year position, considering he’s out of office in about nine months, with the possibility that the next president could be a Republican who will make his own nomination.