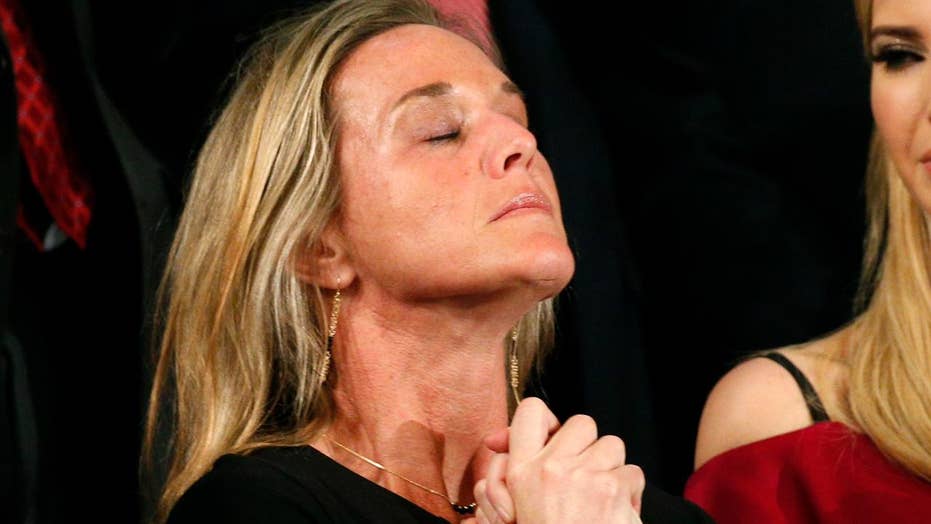 Former Navy SEAL: Insulting our widows will not be tolerated

A former Hillary Clinton volunteer drew swift condemnation -- and lost his job -- after mocking the widow of a fallen Navy SEAL who was honored by the president during his congressional address Tuesday night.

Dan Grilo, who said in his Twitter profile that he was a former volunteer for both Hillary Clinton and President Barack Obama, made the remarks after Trump paid tribute to Carryn Owens. She is the widow of U.S. Navy SEAL William “Ryan” Owens, who was killed in a counterterrorism raid in Yemen last month.

“Our veterans have delivered for this nation—and now we must deliver for them,” Trump said, eliciting an extended standing ovation from the entire chamber for a visibly emotional Owens.

“Ryan died as he lived: a warrior, and a hero – battling against terrorism and securing our nation,” Trump said.

While widely regarded as the most powerful moment of the night, Grilo was not impressed. Responding to a tweet from L.A. Times reporter Matt Pearce, who noted that Owens was crying and overwhelmed, Grilo tweeted:

“Sorry, Owens' wife, you’re not helping yourself or your husband’s memory by standing there and clapping like an idiot. Trump just used you.”

The tweet quickly zipped around social media as commentators on both sides of the aisle were outraged by the swipe. Donald Trump Jr. called the tweet an example of “hatred from the other side."

Hatred from the other side. I would think this is beyond what a human is capable of saying to someone, but it's not! pic.twitter.com/nNVfFWJmDh

Grilo followed up, apologizing for what we called a “poorly worded tweet.”

Grilo’s account soon went private, and was then deleted entirely. But the tweets were saved and archived by other Twitter users.

Grilo’s LinkedIn page says he works as a principal for the Chicago-based Liberty Advisor Group. But as of Wednesday morning, Grilo’s profile page on the site had been deleted, and the company later confirmed that an employee had sent what they called "an offensive and inappropriate tweet" regarding the Gold Star family.

In a statement, the company said that while the message was from his personal account, "his comments were inconsistent with the Company's values."

"Regardless of whether the comments in the tweet were intended to cause the hurt and anger that they ultimately generated, they were unacceptable to us, and the individual who issued the tweet is no longer affiliated with Liberty," the statement said.