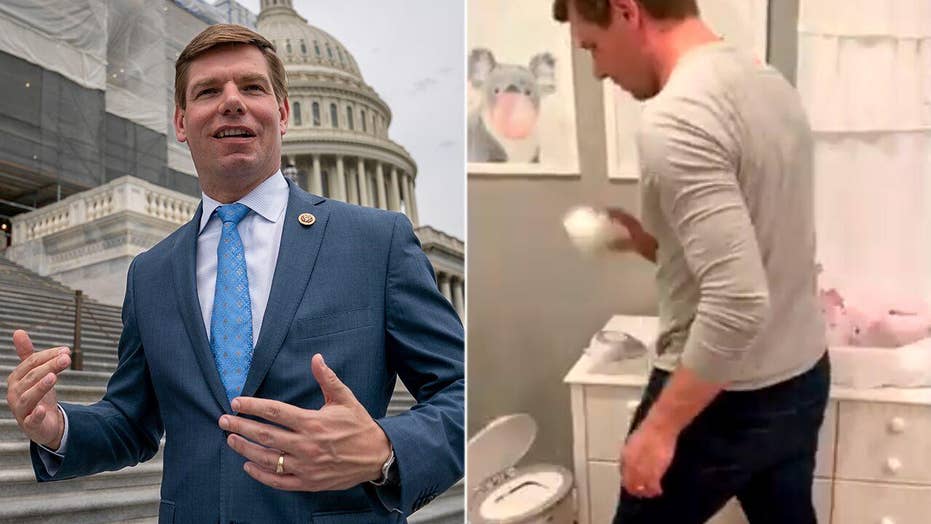 Rep. Eric Swalwell, D-Calif., posted a bizarre fundraising video on Twitter on Sunday. In the video, Swalwell, who has struggled to gain a foothold in the crowded 2020 field, is seen changing the diaper of a baby girl, apparently his daughter Kathryn. The text displayed over the video says, 'If Eric can clean s#*% up at home... he can clean it up in Washington,' before asking for a $1 donation from supporters. Swalwell's post was quickly mocked on Twitter.

Swalwell, who has struggled to gain a foothold in the crowded 2020 field, on Sunday posted a bizarre video on Twitter seeking donations from his supporters.

In the video, Swalwell is seen changing the diaper of a baby girl, apparently his daughter Kathryn.

“If Eric can clean s#*% up at home… he can clean it up in Washington,” text displayed over the top of the video reads.

ERIC SWALWELL ROASTED AFTER FLUNKING BASICS OF CONSTITUTION, GETTING OUTRAGED 'WOMAN' NOT MENTIONED IN FOUNDING DOCUMENT

“This is the dumbest campaign tweet of all time. Of all time,” one person wrote.

“Is this an SNL skit or this for real?” another person responded.

Sunday’s post isn’t the first time Swalwell has been mocked for something he posted on Twitter, with the California Democrat previously admitting he was "rightfully" schooled on social media after complaining about having to go to somewhere other than Trump Tower for coffee.

His post on the subject quickly garnered an avalanche of reaction, including from Trump supporters who mocked Swalwell and pointed out that there were plenty of alternatives for coffee in midtown Manhattan.

Last month, he was roasted after stumbling over his knowledge of the Constitution.

Swalwell had tweeted: “Do you know how many times the word ‘Woman’ is mentioned in the Constitution? Zero.”

“That is unacceptable. Women must be equally represented and equally protected,” he added, advocating for the Equal Rights Amendment, a suggested amendment to the Constitution that would guarantee equal legal rights to everyone no matter their sex.

Swalwell’s tweet caused a backlash after many pointed out that the word “man” also doesn’t appear in the Constitution.