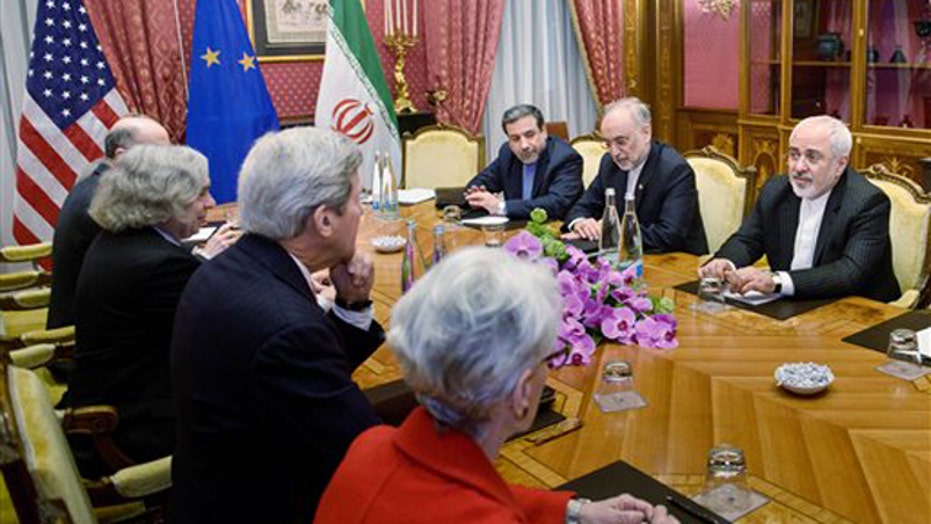 Is US caving to Iran demands for nuclear deal?

Emerging details of a possible nuclear deal with Iran have drawn sharp criticism from congressional lawmakers on both sides of the aisle, who say the U.S. and its international partners may be ceding too much as a key deadline nears.

If reports are true, "then we are not inching closer to Iran’s negotiating position, but leaping toward it with both feet,” charged Sen. Robert Menendez, D-N.J., top Democrat on the Senate Foreign Relations Committee and a vocal critic of the direction of the talks.

“My fear is that we are no longer guided by the principle that ‘no deal is better than a bad deal,’ but instead we are negotiating ‘any deal for a deal’s sake.’”

The deal is not done, but sources tell FoxNews.com negotiations seem to be reaching a climax at the P5+1 talks in Lausanne, Switzerland. Lawmakers, meanwhile, appear to be getting more restive about whether the demands on Iran will be tough enough.

Details of the emerging deal include a possible trade-off which would allow Iran to run several hundred centrifuges in a once-top secret, fortified bunker site at Fordo, in exchange for limits on enrichment and nuclear research and development at other sites -- in particular, Iran's main facility at Natanz.

The terms of the agreement have not been confirmed and were shared with The Associated Press by officials who spoke on the condition of anonymity.

According to the AP report, no centrifuges at Fordo would be used to enrich uranium, but would be fed elements like zinc, xenon and germanium for separating out isotopes for medicine, industry or science.

Initially, the P5+1 partners, which include the U.S., U.K., Russia, France, China and Germany, had wanted all centrifuges stripped away from the Fordo facility. However, under this reported deal, Iranian scientists would be prohibited from working on any nuclear research or development program there, and the number of centrifuges allowed would not be enough to produce the amount of uranium it takes to make a bomb within a year anyway, according to the officials.

The site also would be subject to international inspections.

But that did not seem to boost the confidence of detractors. In a symbolic statement underscoring the concerns of many lawmakers, the Senate also voted unanimously late Thursday for a non-binding Iran amendment -- to an unrelated budget measure. The amendment endorses the principles of separate legislation that would re-impose waived sanctions and level new ones on Iran if President Obama "cannot make a determination and certify that Iran is complying" with an interim agreement or any new one that is established in current talks.

Last Friday, 367 House lawmakers, including 129 Democrats, also wrote to Obama warning that a deal must “foreclose any pathway to a bomb” before they’ll support legislation lifting sanctions on Tehran. The letter was spearheaded by Reps. Ed Royce, R-Calif., and Eliot Engel, D-N.Y., the leaders of the House Foreign Affairs Committee.

It is not clear whether the recent details emerging from the talks would satisfy that.

“[The Iranians] have been cheating for the last 20 years, this facility [Fordo] was found out in 2009. At the end of the day it is a hardened site. To allow enrichment here would be, I think, very irresponsible,” he said in an interview with Greta Van Susteren on Fox News' “On the Record” on Thursday.

“It would be delusional for any P5+1 agreement to allow [Iran] to enrich in a fortified facility,” Graham added. “The Arabs are not going to accept such a deal, and they’ll get a bomb of their own, then you’re on the road to Armageddon.”

Other observers of the agreement say the critics are rushing unnecessarily to judgment.

“We don’t know whether the reports are true – there’s been a lot of things leaked that may be true or may be a misunderstanding,” said Trita Parsi of the National Iranian American Council, who spoke with FoxNews.com from the talks in Lausanne. “But if the reports are correct and there will be centrifuges with no uranium in it -- they can’t produce a bomb -- it’s really put the emphasis on the unreasonableness of the [critics'] objections.”

Daryl Kimball, executive director of the Arms Control Association in Washington, agreed. “I think Senator Graham and Senator Menendez need to take a step back and put this development in a broader context. The key to Fordo is that we do not want this to be a facility with industrial-scale uranium enrichment and this report suggests they are moving in that direction.”

The deal reportedly would scale back the centrifuges and uranium enrichment at Natanz and impose other restrictions on nuclear-related research and development. All of the options on the table right now are designed keep an Iranian “breakout” of a weapon at least one year away for the life of the deal, which would run for 10 years.

This is not enough, and smacks of too much compromise for too little in return, said Menendez. “An undue amount of trust and faith is being placed in a negotiating partner that has spent decades deceiving the international community.”

That is the reason why David Albright, of Washington’s Institute for Security and International Security, is concerned about Fordo. The deal would allow the Iranians to keep their technology intact and if they please, could be repurposed to enrich uranium.

"It keeps the infrastructure in place and keeps a leg up, if they want to restart [uranium] enrichment operations," he said.

The White House said Friday that it was confident a “political agreement” will be made by the March 31 deadline, which would make space to negotiate the more complicated technical details ahead of the harder June 30 deadline.

“Important progress has been made but this president is not going to stop short,” said White House spokesman Josh Earnest. However, he “is not willing to accept an agreement that does not accomplish our goals which is to cut off every pathway Iran has to acquiring a nuclear weapon and secure their commitment to cooperating with a set of intrusive inspections to prove they are complying with the agreement.”

FoxNews.com's Kelley Beaucar Vlahos and The Associated Press contributed to this report.