Chicago Mayor Rahm Emanuel has officially unveiled a new ID program he says is designed to welcome the “undocumented” community and people “on the sidelines” into the city.

“If you want somebody who’s undocumented to feel comfortable to be able to drive their child to school and all the benefits, they have to be part of the city.”

“If you want somebody who’s undocumented to feel comfortable to be able to drive their child to school and all the benefits, they have to be part of the city,” Emanuel said.

The name “municipal ID” was initially floated for the program, but Emanuel revealed that Chicago’s city IDs would actually be called “City Keys.”

He said City Keys were designed to give a person who doesn’t have an ID or a driver’s license essentially the same benefits as those who do. “When somebody says, 'Can I see your driver’s license?' -- what that unlocks and what that smooths out and all the speed bumps that literally get eliminated because you have a driver’s license,” Emanuel said.

The mayor says the IDs will also provide benefits including discounts at cultural centers, on public transit and for veterans and senior citizens at locations across the city. Chicagoans will be able to link their public transit and library card to the ID and potentially even open bank accounts with it.

Critics of the program say it might be a way for undocumented workers or people illegally in the U.S. to obtain a valid ID.

“Is this going to be a way for people get fake identification? I think there's a strong chance for that happening.”

“Is this going to be a way for people get fake identification? I think there's a strong chance for that happening,” Chicago Alderman Nick Sposato told Fox News this past summer.

Chicago’s city clerk, Anna Valencia, says that there will be a strong four-point application process that a person must navigate in order to get an ID, and that the cards come with hidden security features. The city says it is preparing to release the types of documentation it will accept from an applicant to prove identity.

"I can’t go into all the details of what is the security features because we want to keep that private so no one duplicates these, but we feel very confident in our security features for the card,” Valencia said.

The city says the IDs will help those who currently struggle to get one – like the homeless or those re-entering the city after being imprisoned. 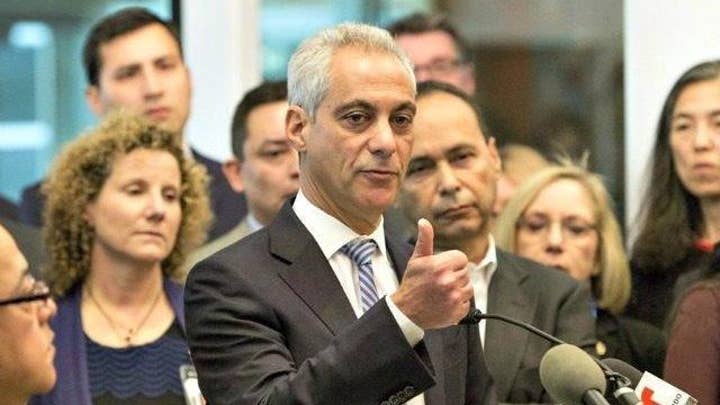 The mayor also pointed out that certain undocumented people, like Francis Velez, might only stay in a bad living situation or abusive relationship because they can't get the ID they need to move out.

"With me, I was only running around with a police report saying who I was,” said Velez, who says she had trouble leaving an abusive relationship without a driver’s license. “Now, with this ID,  people can go get them and be better off not going back to the abuser.”

Benefits notwithstanding, critics including some city aldermen think the program might be a ploy for Emanuel to pick up Latino votes as he potentially revs up another mayoral campaign.

“I think it's all about votes. I mean, I think they're just trying to please a certain demographic in the city to say, ‘Hey we're for you, we support you,' and I think that's what it's about,’” Sposato said.

The IDs will be available in March, and applicants can choose their gender on the ID. The city says the first 100,000 IDs will be free. After that, the IDs will cost $5 for minors and $10 for applicants 18 to 64.

The mayor budgeted $1 million this year for the program and will budget another $1 million next year. City aldermen who voted against the ID program figure it might cost up to three times the budget.