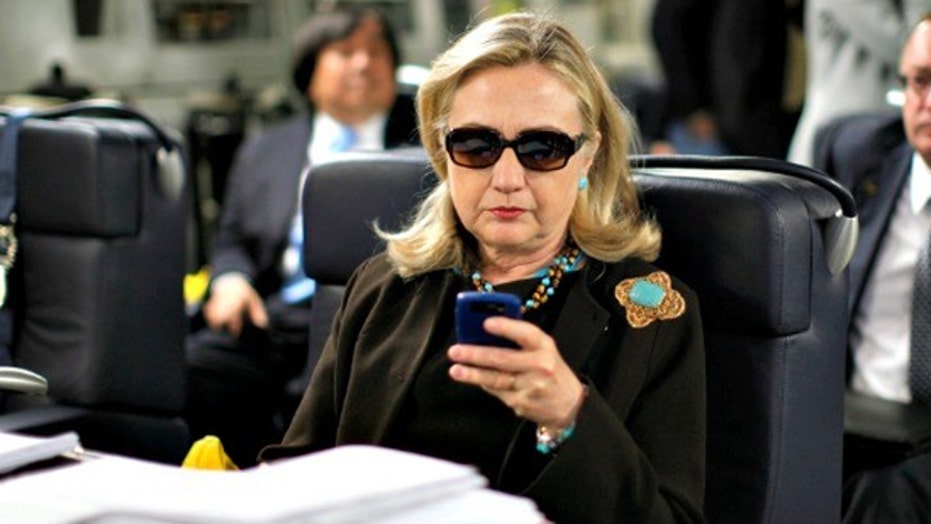 Recently released emails detail then-Secretary of State Hillary Clinton's interest in arming Libyan opposition groups using private security contractors before the fall of Muammar Qaddafi in 2011 – though at the time, the opposition was not formally recognized by the U.S. or United Nations, which prohibited arming without following strict guidelines and oversight.

The issue remains so sensitive that the emails recently released by the State Department redacted a key line on the matter. But the unredacted version of the same email, released to the congressional Benghazi Select Committee and first posted by The New York Times last Thursday, showed Clinton appearing to endorse the idea of using private contractors to her then-deputy chief of staff, Jake Sullivan.

"FYI. The idea of using private security experts to arm the opposition should be considered," Clinton wrote to Sullivan on April 8, 2011, attaching an intelligence report from Hillary’s adviser Sidney Blumenthal. The opposition was known as the Transitional National Council, or TNC.

Another email released by the State Department shows that five days earlier, on April 3, 2011, Bill Clinton said he would not rule out arming the Libyan opposition. The story was circulated by Cheryl Mills, Hillary Clinton's principal personal adviser at the State Department, to "H." While it's not clear who “H” is, based on the message traffic it is likely Hillary Clinton or possibly adviser Huma Abedin.

Later that same year, a Sept. 10, 2011 email with a subject line "Rogers" said, "Apparently wants to see you to talk Libya/weapons."

At the time, the Republican chairman of the House Intelligence Committee was Mike Rogers, who abruptly announced he would not seek re-election in the spring of 2014. Rogers did not immediately respond to questions seeking comment. Fox News also filed its own Freedom of Information Act request for the documents in October 2012.

Current and former intelligence and administration officials consistently have skirted questions about weapons shipments, first documented by Fox News in October 2012, one month after the Benghazi terrorist attack, and what role the movement played in arming extremist groups the U.S. government is now trying to defeat in Syria and Iraq.

Through shipping records, Fox News confirmed that the Libyan-flagged vessel Al Entisar, which means "The Victory," was received in the Turkish port of Iskenderun -- 35 miles from the Syrian border -- on Sept. 6, 2012, five days before the Benghazi terrorist attack. The cargo reportedly included surface-to-air anti-aircraft missiles, RPG's and Russian-designed shoulder-launched missiles known as MANPADS.

On the movement of weapons, in an interview broadcast May 11, former acting CIA director Mike Morell said the CIA and U.S. government “played no role. Now whether we were watching other people do it, I can't talk about it.”

Heavily redacted congressional testimony, declassified after the House intelligence committee’s Benghazi investigation concluded in 2014, shows conflicting accounts about the movement of weapons from Libya to Syria were apparently given to lawmakers.

On Nov. 15, 2012, Morell and Director of National Intelligence James Clapper testified "Yes" on whether the U.S. intelligence community was aware arms were moving from Libya to Syria. This line of questioning by Republican Rep. Devin Nunes, who is now the intelligence committee chairman, was shut down by his predecessor Rogers, who said not everyone in the classified hearing was "cleared" to hear the testimony, which means they did not have a sufficient security clearance.

An outside analyst told Fox News that Rogers' comments suggest intelligence related to the movement of weapons was a "read on," and limited to a very small number of recipients.

Six months later, on May 22, 2013, Rep. Mac Thornberry, R-Texas, now chairman of the House Armed Services Committee, asked if the CIA was "monitoring arms that others were sending into Syria." Morell said, "No, sir."

Several individuals connected to Benghazi and Hillary Clinton’s term at the State Department now work at the D.C. consulting firm Beacon Global Strategies. Among them are Clinton’s principal gatekeeper Philippe Reines; Morell, who’s listed as a senior counselor; and Andrew Shapiro, who was a Clinton policy adviser at the State Department whose portfolio included ridding Libya of shoulder-launched missiles called MANPADs. Critics argue no group knows more about Benghazi or has such a vested interest in the outcome of the congressional Benghazi investigation.