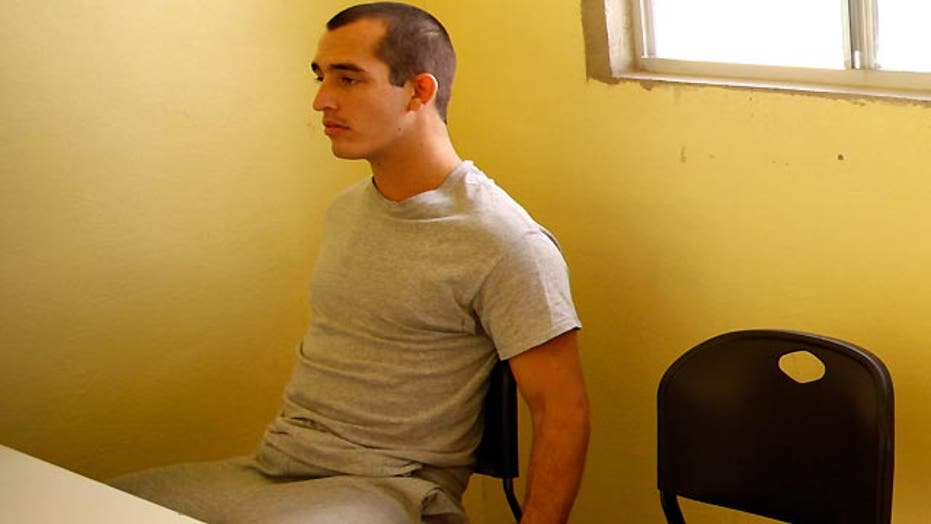 Jailed Marine: Everything they did to me was out of anger

Exclusive: Sgt. Andrew Tahmooressi on how guards in the first prison where he was incarcerated retaliated against him, made his ankles bleed with tightened shackles. Plus, how he is coping with PTSD behind bars. #MarineHeldinMexico

More than 500 armed Mexican military and law enforcement personnel have crossed the U.S. border without permission over the past decade, raising questions over why a U.S. Marine remains jailed in Mexico for a similar offense.

The startling figures were provided by U.S. Customs and Border Protection, in a letter to Rep. Duncan Hunter, R-Calif. CBP Commissioner Gil Kerlikowske reported that roughly 525 armed Mexican soldiers and police jumped the border since 2004, in 152 separate incidents.

"Foreign military incursions are infrequent but can involve officer safety and other concerns," he wrote.

Hunter, though, used the stats to underscore his concerns about Sgt. Andrew Tahmooressi, who has been jailed in Mexico for nearly three months after inadvertently crossing into Mexico with firearms in his vehicle.

"In Andrew's case, Mexico has shown its intolerance for the same action that its police and military initiated hundreds of times in the last several years alone," Hunter, who has been petitioning for Tahmooressi's release, said in a statement.

"It's time for the U.S. to reconsider its treatment of the incidents and send a direct message to Mexico that incursions won't be tolerated along the international border."

According to CBP, some of the Mexican personnel who improperly crossed the border were detained, though it's unclear for how long. The agency reported that 131 subjects were detained.

There is a distinction between the circumstances of Tahmooressi's detention and the detention of the dozens of Mexican personnel. While Tahmooressi was not on duty when he crossed, CBP suggests the Mexican military and law enforcement who cross over typically are pursuing suspects or otherwise trying to enforce their own laws.

When encounters with unarmed Mexican personnel are included, the number of total crossings is considerably larger -- according to the agency, a total of 300 border incursions were documented since 2004.

Kerlikowske described these as "relatively few," but Hunter disputed that characterization.

"Also, there is a clear lack of consistency among DHS in handling these incidents, especially in cases of unauthorized incursions with armed authorities," he said.

The details from Kerlikowske follow congressional concerns voiced earlier this year by Sen. Tom Coburn, R-Okla. In a January letter, Coburn revealed an incident where individuals in Mexican military uniforms apparently drew their guns on a U.S. border agent after crossing the border into Arizona.

Kerlikowske appeared to acknowledge this incident in his letter to Hunter, saying that two soldiers from the Mexican military walked across the U.S. border near Sasabe, Ariz. They ran into U.S. Border Patrol agents about 50 yards north of the border.

While lawmakers have raised security concerns about these incidents, Kerlikowske noted his agency has a "liaison unit" that meets to "reduce conflicts" along the border.