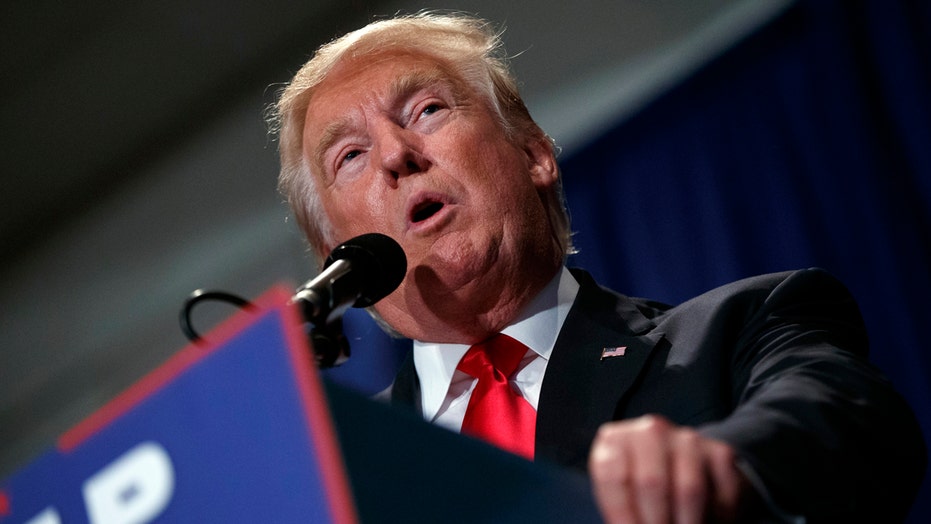 Smart for Trump to dismiss polls showing him trailing?

On the roster:  Don’t kid yourself, the polls are usually right - Grassley: Release material from Clinton probe - Ed Rendell says Clinton Foundation should be shut down if Hillary wins - Audible: The Lady’s not for turning - Worst Swedish fish ever

DON’T KID YOURSELF, THE POLLS ARE USUALLY RIGHT
If Donald Trump and his campaign really don’t believe that he is behind in the presidential election, then they are much worse off than even the polls would indicate.

The magic meme moment for this phase of the campaign came Thursday in a CNN interview where a Trump adviser face planted when he tried to game the polls.

Informed that his campaign was losing, Trump lawyer Michael Cohen retorted, “Says who?” When told that it was the verdict of the polls, Cohen sneered, “Which polls?” The answer that has been ricocheting around the media: “All of them.”

And they all really do.

Certainly, Trump’s new campaign manager, pollster Kellyanne Conway, knows the truth. So, one would assume that others in the campaign are aware of Trump’s deficit, which currently stands at about 9 points in an average of reliable polls.

If the numbers hold, it would be the worst popular vote defeat since 1984, so whatever individual polls indicate, there is lots of ground to be made up.

The candidate this morning tweeted, “They will soon be calling me MR. BREXIT!” an apparent reference to the botched polling of the U.K. referendum on leaving the European Union. The message in Trump’s tweet and reinforced by his supporters far and wide is that the polls are simply wrong.

It’s no mystery why the campaign doesn’t like what the polls say, but are Trump and his campaign and supporters doing the right thing in questioning their accuracy?

Yes, the polls in Britain were wrong, but this isn’t Britain and this isn’t a low-turnout referendum. This is the dadgum presidency. And the polls on the presidency have been consistently correct for generations.

For your primer on the validity of polling, read Nate Silver’s treatise on the topic. His conclusion is that in lower turnout elections, polling can be more challenging, but when it comes to the big Kahuna, polls have done a good job. The most glaring error in presidential polling, the 1948 election, was not just in the relative infancy of public opinion work, but the result of a special set of circumstances.

If you choose to believe that this is the year in which the polls are all wrong, you may have also thought that Mitt Romney was going to win in 2012. He didn’t and, for now, Trump isn’t.

When Romney’s campaign starting spitting mumbo jumbo about the polls being wrong, it was late in the race and the Republicans were only too ready to grasp at straws. But on election night, the verdict was clear. Pollsters had done their jobs well, but the GOP hadn’t.

Disputing the polls in August is something different. Losing candidates usually blow off polls because they don’t want their supporters to give up hope. A little of this gamesmanship is part of almost every election cycle. The epitaph of every losing campaign might read, “The only poll that matters is on Election Day.”

But 82 days is a long time to be whistling past the graveyard.

As we have discussed, Trump needs the race reset in order to be competitive. Pooh poohing the polls a bit, but making ready for a comeback is one thing. Pretending that the polls aren’t real is quite another. If Trump and his campaign do not level with voters, and stop with the stuff about Twitter followers and rally sizes, the eventual falloff will be even greater.

Big rallies and active social media accounts are certainly good measures of the intensity of voters, but terrible metrics for overall sentiment. It would be like gaging the temperature of your home by sticking your head in the freezer.

The heartbreak that followed 2012 for Republicans was made much worse for those who were not forced to confront reality sooner. It may have been too late in Romney’s case for the truth to set him free, but that is not so this time.

With more than 11 weeks to go, Trump could certainly close that gap or Clinton could collapse in the polls. But if he is living in an alternate reality, there would be no incentive for Trump to change direction.

Comebacks are hard, but not that rare in presidential politics, as we’ve in 1948, 1980, and 1988. Pretending that one is not necessary, though, is no way to get a comeback started.

TIME OUT: BUT, IT’S CHOCOLATE
Slate talks about how Roald Dahl’s whimsical works always involve food and the perils of those who overindulge: “Roald Dahl wrote swirling sugar fantasias, palaces of chocolate, and a floating, dripping den of peach flesh. He wrote frothing chocolate waterfalls and gravity-negating fizzy drinks…Dahl's feasts are his imaginative aristeias. At the same time, Dahl’s most whimsical confections are always paired with torments for those who can’t resist them. Overindulge—drink from the forbidden chocolate river—and, whoops, you are Augustus Gloop torpedoing toward the fudge boiler. Dahl’s culinary flights of fancy are matched by endlessly inventive brutality toward those who eat too much, the Bruno Jenkinses and the Augustus Gloops (Gloop with its terrible smack of formless, spreading flesh).”

GRASSLEY: RELEASE MATERIAL FROM CLINTON PROBE
The Hill: “Some material that the FBI delivered to Congress regarding its investigation into Hillary Clinton’s use of a private email server could be made public, according to a new report…A ‘substantial amount’ of what the FBI sent to Congress appears to be unclassified, meaning it could potentially be released publicly, The Washington Post reported Wednesday. ‘If it isn’t classified, it ought to be public,’ Senate Judiciary Committee Chairman Charles Grassley(R-Iowa) told the Post. Grassley is calling for Senate officials to separate classified and unclassified material but said it may take a significant amount of time to do so, according to the newspaper.”

Clinton Foundation reportedly hired cyber security firm for possible hack - Fox News: “The Clinton Foundation reportedly hired an outside cyber security company to look at its servers after possibly being hacked. Two sources familiar with the situation told Reuters on Wednesday that no files from Hillary and Bill Clinton’s organization have surfaced in the public. One of the sources and two other U.S. security officials told the news agency that the hackers appeared to have used ‘spear phishing’ techniques to get access to the foundation’s systems.”

Ed Rendell says Clinton Foundation should be shut down if Hillary wins - The Hill: “Former Gov. Ed Rendell (D-Pa.) says the Clinton Foundation should be disbanded if Democratic nominee Hillary Clinton is elected to the White House. ‘I definitely think if she wins the presidency they have to disband it. I know it’ll be hard for President [Bill] Clinton because he cares very deeply about what the foundation has done,’ Rendell, a Clinton ally, told the New York Daily News.”

Kasich to return to N.H., bring operation back together - Cleveland Plain-Dealer

AUDIBLE: THE LADY’S NOT FOR TURNING
“But I will not lie to you about the state of this race. I won’t do it. No amount of peer pressure digital or otherwise can move me.” – Dana Perino on Twitter responding to polling critics who say the polls aren’t predictive.

FROM THE BLEACHERS
“Here’s one college educated white voter who isn’t abandoning Trump’s candidacy. Wow, Chris. Each day you’re sounding more and more like the Washington establishment. Get over it. I feel like I’m reading a Mitt Romney blog. Disappointing.” – Bob Daignault, Lebanon, Ohio

[Ed. note: I expect millions of college-educated white voters will cast ballots for Trump this fall. The question is: will there be enough in an electorate of perhaps 135 million. Trump is outperforming prior GOP nominees among white voters without college degrees, which gives him some slack on the side of more educated and typically more affluent voters. But right now it’s not enough, particularly among college-educated white women – a group that split fairly evenly in the past two elections but now favors Clinton by a margin of as much as 30 points.]

“Thanks for the consistently GREAT insights and analyses. Apparently Republicans have drunk the cool aid of ‘form over substance’ (‘Process over Policy’) along with the vast majority of center-left Democrats. If (when?) Trump goes down in flames, it will be because almost everyone has made ‘The Perfect (we can see) the enemy of the Good (we cannot see).’ At the end of the day, this is what is sweeping America into the dust bin of history…(important) substance has been completely replaced by a preoccupation with (smooth) form. Teddy Roosevelt (and George Orwell) are turning over in their graves.” – Eric Hutchins, Santa Barbara, Calif.

[Ed note: Very kind of you to say, Mr. Hutchins. Puts me much in mind of the great line from G.O.:“To see what is in front of one’s nose needs a constant struggle.”]

“I think it is now abundantly clear that Donald Trump both exaggerated his personal wealth, and misled voters about his commitment to self-fund. While Mrs. Clinton and her PAC’s have spent $100-million on advertising, Trump not a dime. Matching her would have meant spending 1/100 of his alleged $10-billion dollar fortune. Who wouldn’t allocate that to achieve one’s dream job? Can we be honest? He never had as much as he claimed, nor is he inclined to opening his wallet.  It was all a sham.” – Richard Jacobson, Wilmington, Del.

[Ed. note: Trump is certainly rich. How rich is something of an open question, and certainly he has inflated public perceptions of his fortune by valuating his “brand” at as much as $6 billion. But there’s no doubt he funneled tens of millions of dollars into his successful primary bid. A larger question for Trump is how to make his brand as a rich guy work in the general election. Like the previous Republican nominee, it has turned into a liability.]

WORST SWEDISH FISH EVER
Fox News: “Jaws may not be the only one salivating as you splash. Just when you thought it was safe to go back in the water, a cousin of the piranha reported to go after swimmer’s testicles has been found in coastal waters between Sweden and Denmark. And fish experts are warning locals to stay aware -- in order to stay whole. ‘Keep your swimwear on if you’re bathing in the Sound these days -- maybe there are more out there!’ Henrik Carl, a fish expert at the Natural History Museum of Denmark, told Swedish news site The Local. ‘They bite because they’re hungry, and testicles sit nicely in their mouth,’ Carl added…Yikes!”

AND NOW, A WORD FROM CHARLES…
“On almost every issue abroad, the opponent is the one who would benefit if something bad happens. The incumbent, which is Hillary, would be the one who would suffer. But there is one exception, that’s Russia…” -- Charles Krauthammer on “Special Report with Bret Baier.” Watch here.