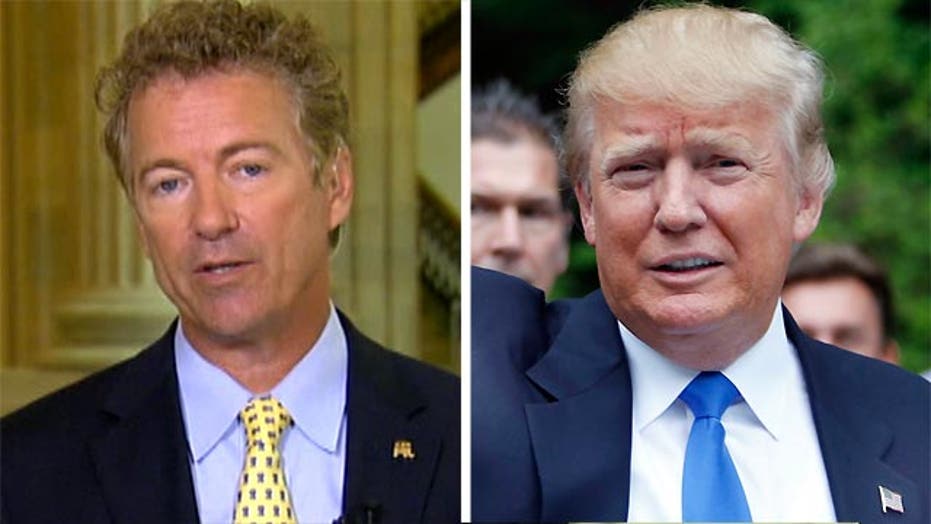 Rand Paul: Donald Trump is 'pretending' to be conservative

The rhetoric between Republican front-runner Donald Trump and Senator Rand Paul, R-Ky., is heating up on the campaign trail ahead of the next GOP debate.

At a Saturday rally in Boone, Iowa, Trump blasted Paul as being an “ineffective guy” and weak on immigration and national security issues. He claims Paul is attacking him because his polls numbers remain quite low and he needs media attention.

During his speech, Trump blasted critics who say he’s picking fights with his fellow Republicans and pointed to primary voters who prefer his “aggressive tone and tremendous energy."

The latest feud began Thursday when Paul, referring to Trump, said “I don’t really think there’s anything conservative about him and I think he’s selling us a bill of goods. And so I think we need to be very careful that we don’t succumb to celebrity and all of the sudden get a fake conservative that turns out to be a big government Republican.”

Later Saturday, Trump again blasted Paul on social media. “Lightweight Senator Rand Paul should focus on trying to get elected in Kentucky--- a great state which is embarrassed by him,” said the businessman in a tweet.

In another Twitter post, he took a personal dig at Paul, saying he doesn’t compare to his father, former congressman and 2008 Republican presidential candidate Ron Paul. “I truly understood the appeal of Ron Paul, but his son, Rand Paul, didn't get the right gene,” he said.

Since Trump announced his White House run in June, both candidates have spared over policy and personality.

Earlier this month, Paul said Trump “is a disaster. I think he will hurt the country and will lose in a land slide.”

At a New Hampshire rally in August, Trump told supporters a story about him playing golf with Paul. “So I'm actually a good golfer. I killed him, OK? I killed him. If I didn't, I wouldn't say it, but I killed him.”