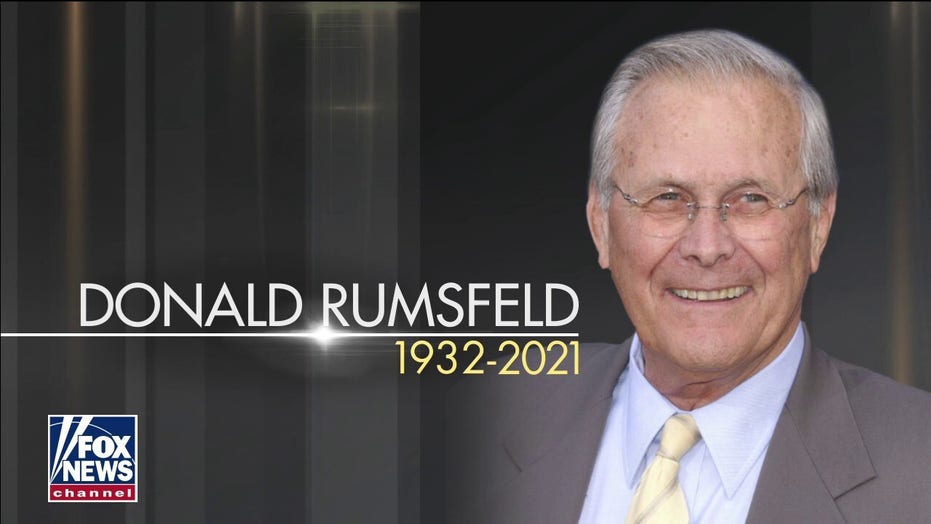 Donald Rumsfeld’s death at age 88 on Wednesday prompted an array of reactions from politicians and other public figures who remarked on the life of the former secretary of defense.

Rumsfeld’s family announced his passing, noting that he had died "surrounded by family in his beloved Taos, New Mexico." A two-time defense secretary, Rumsfeld is best known for his prominent role in former President George W. Bush’s administration, leading Pentagon policy during the wars in Iraq and Afghanistan.

Bush was among the first public figures to react to Rumsfeld’s death, praising his former colleague’s "steady service as a wartime secretary of defense — a duty he carried out with strength, skill, and honor."

Condoleezza Rice, who served as secretary of state in the Bush administration, remembered Rumsfeld as a "remarkable and committed public servant."

"He was also a good friend and a steady presence throughout the many trials of the post-9/11 world. I will miss him as a colleague and as a friend. Joyce and the family will be in my thoughts and prayers," she said.

Rumsfeld is the only person in U.S. history to twice serve as the Pentagon’s highest official. He held roles under four presidential administrations and once staged his own unsuccessful bid for the presidency.

As defense secretary under President Bush, Rumsfeld faced intense scrutiny over his handling of the Iraq and Afghanistan conflicts following the Sept. 11, 2011 terrorist attacks.

"I am saddened to hear of Donald Rumsfeld's passing. He dedicated his life to public service answering the call time and time again," said John Bolton, another top Bush administration official who worked closely with Rumsfeld. "It was an honor to work with him in the Bush 43 Administration."

"Elaine and I were saddened today by the passing of an American patriot who served his country honorably and tirelessly," McConnell said. "Donald Rumsfeld’s decades of service began and ended among the brave men and women working to keep America safe.

"His time on active duty in the Navy began a distinguished career that elevated his talents to the highest levels of policymaking and public leadership. At every step of the way, Donald Rumsfeld led with conviction and a cutting intellect," McConnell added.

Rep. Mike Waltz, R-Fla., who served as a Pentagon aide under Rumsfeld, said the country would "never forget its Secretary of Defense who ran to the burning Pentagon on September 11th to help others in need."

"Donald Rumsfeld was a patriot who served his country in uniform, in the halls of Congress, as U.S. Ambassador to NATO, White House Chief of Staff, and as Secretary of Defense under two administrations," Waltz said. "I take great pride in having worked as a policy advisor for Afghanistan in the Pentagon under his leadership. He was dedicated to ensuring our military was ready in times of peace and keeping our country safe in times of war. Rest in Peace."

Rumsfeld’s family noted his lifelong public service in its statement.

"History may remember him for his extraordinary accomplishments over six decades of public service, but for those who knew him best and whose lives were forever changed as a result, we will remember his unwavering love for his wife Joyce, his family and friends, and the integrity he brought to a life dedicated to country," Rumsfeld’s family said.

This is a breaking story. Check back for updates.