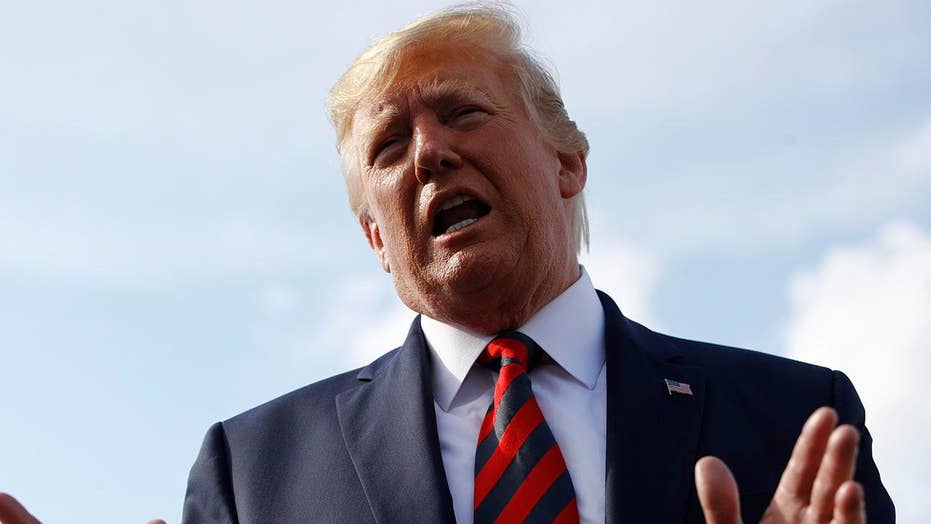 President Trump touts strength of US economy amid recession fears

Trump's optimism comes with a caveat: The economy could take a downturn, but only because he is fighting for new trade deals to insure long-term economic growth; chief White House correspondent John Roberts reports.

A federal court judge on Wednesday ruled that President Trump can immediately challenge congressional Democrats' Emoluments Clause lawsuit against him, saying the litigation raises the "unsettled" question of whether politicians have standing to sue a sitting president for running international businesses.

The development was a major victory for Trump, who has railed against what he has called politically motivated invocations of the Emoluments Clause.

The Bill Clinton-appointed judge, Emmet Sullivan, had ruled this summer that the 200 congressional Democrats did have the legal standing to sue Trump. But the D.C. Circuit Court of Appeals sent the case back to Sullivan and instructed him to reconsider the unprecedented separations-of-powers implications of the case.

"The question of whether the Foreign Emoluments Clause, U.S. CONST. Art. I, § 9, cl. 8, or other authority gives rise to a cause of action against the President is unsettled, and the standing question arises at the intersection of precedent," the D.C. Circuit Court of Appeals said.

"In addition, because either of those issues could be dispositive of this case, it appears to this court that the district court abused its discretion by concluding that an immediate appeal would not advance the ultimate termination of the litigation just because discovery and summary judgment briefing could proceed expeditiously," the appellate court went on.

On further review, Sullivan, who was appointed to his first judgeship by Ronald Reagan, rejected the Democrats' request to pursue discovery, including financial documents, from dozens of Trump's businesses.

Democrats also requested an immediate injunction barring Trump from making money on his international businesses, noting that the Trump Organization has already established a “voluntary procedure by which [it] identifies and donates to the U.S. Treasury profits from foreign government patronage at its hotels and similar businesses."

Instead, Sullivan allowed Trump the rare opportunity to pursue a so-called interlocutory, or mid-case, appeal, given the “substantial ground for difference of opinion" on whether the Democrats can even sue the president on Emoluments Clause grounds.

Until the appellate courts resolve the larger legal question at issue, Sullivan halted all discovery in the district court case.

"The Court will also stay proceedings in this case pending the interlocutory appeal," Sullivan said.

The clause, contained in Article I, Section 9 of the Constitution, states: "No Title of Nobility shall be granted by the United States: And no Person holding any Office of Profit or Trust under them, shall, without the Consent of the Congress, accept of any present, Emolument, Office, or Title, of any kind whatever, from any King, Prince, or foreign State."

But the precise meaning of that clause is unclear, and legal scholars sharply differ on whether it has implications for a president with international business interests -- and, if so, what those implications might be.

A federal appeals court, earlier this year, dismissed a similar Emoluments Clause lawsuit filed against Trump by the state of Maryland and the District of Columbia.

"I got sued on a thing called emoluments. Emoluments. You ever hear of the word? Nobody ever heard of it before," Trump said at an event in Pennsylvania earlier this month.

"And what it is is presidential harassment, because this thing is costing me a fortune, and I love it," Trump went on. "I love it because I’m making the lives of other people much, much better."

Sullivan's ruling came a month after another federal judge in frank terms dismissed a lawsuit by the Democratic National Committee (DNC) against key members of the Trump campaign and WikiLeaks over hacked DNC documents, saying they "did not participate in any wrongdoing in obtaining the materials in the first place" and therefore bore no legal liability for disseminating the information.

Trump, in a tweet afterwards, noted that the judge in the case, John Koeltl, was appointed by Bill Clinton. The president called Koeltl's decision "really big 'stuff'" and "yet another total & complete vindication and exoneration."