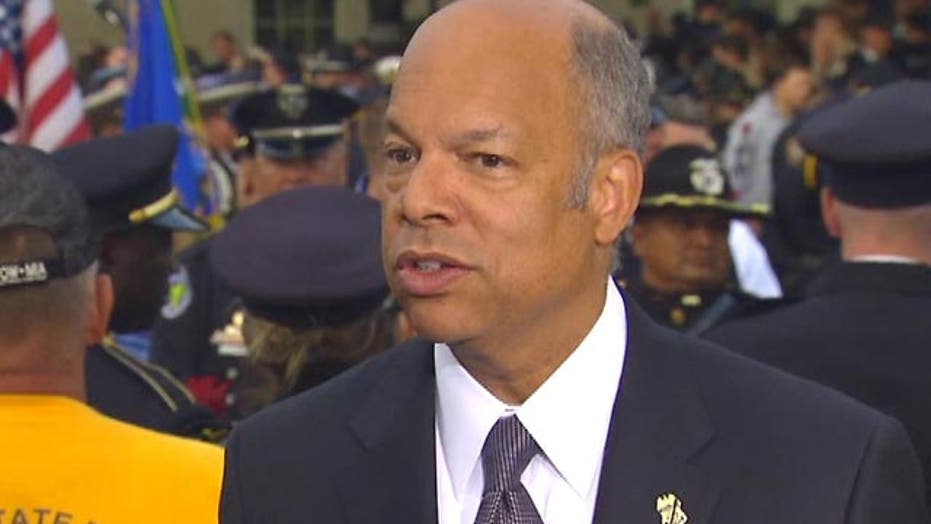 Homeland Security Secretary Jeh Johnson faced mounting Capitol Hill pressure Tuesday to force state and local jurisdictions to abide by federal "detainers" on illegal immigrants in their custody, in the aftermath of San Francisco releasing an undocumented Mexican national now charged with murdering a woman along a city pier.

But Johnson resisted, telling the House Judiciary Committee that forcing local authorities to comply with federal requests to detain an illegal immigrant for deportation would be a “huge setback.”

He said roughly 12,000 federal detainer requests last year were ignored, but the Obama administration remains committed to a new program in which federal officials ask local authorities for assurance that requests will be honored.

“I don’t believe [changing the law] through federal legislation is the way to go. I want to see us work cooperatively," Johnson testified, arguing that the courts have expressed concerns about such a change.

Committee member Rep. Tom Marino, R-Pa., disagreed with the argument, saying, “I think you have the authority, with all due respect. I think the administration is avoiding this.”

In the San Francisco case, the Sheriff's Department ignored a federal "detainer" on Francisco Sanchez despite his extensive criminal record and the fact he'd been deported several times before. He was released in April, and allegedly killed Kathryn Steinle July 1.

Despite concerns about San Francisco's sanctuary city policies, the feds are touting a new partnership program. Johnson established the new Priority Enforcement Program last year to replace the troubled Secure Communities program and help his department work with state and local authorities to get convicted criminals and others who pose a danger to public safety off the streets.

But he said right now, 33 of the 49 biggest jurisdictions have agreed to work with DHS and 11 more are considering doing so -- while five have said no.

Johnson said he met personally in April with San Francisco Sheriff Ross Mirkarimi who allowed the release of Sanchez.

Federal authorities had turned Sanchez over to San Francisco authorities on a drug charge and issued a detainer. However, the sheriff's department said it could not keep him after the charged was dropped, even though Sanchez had seven previous felony charges and had been deported five times, which resulted in at least one “significant” prison stay, according to Johnson.

Committee member South Carolina GOP Rep. Trey Gowdy on Tuesday said Sanchez “is by any definition a career criminal” and questioned why he wasn’t on the government’s high-priority list for removal.

“To me, he is exhibit A that we don’t have control of over the border,” Gowdy, a former federal prosecutor, said in a heated exchange with Johnson. “Why was somebody who was in federal prison … released to a sanctuary city?”

Johnson replied: “You’d have to ask the Bureau of Prisons.”

Gowdy said: “San Francisco may have been a sanctuary city for Sanchez but not for that young lady.”

Johnson also acknowledged that U.S. Immigration and Customs Enforcement released more than 30,000 criminal illegal immigrants, which he acknowledged was a concern.

“I want to see that number come down dramatically,” he said.

Statistics released Tuesday by the House Judiciary Committee showed that of the 30,558 "criminal aliens" released in fiscal 2014, 1,423 went on to commit additional crimes.