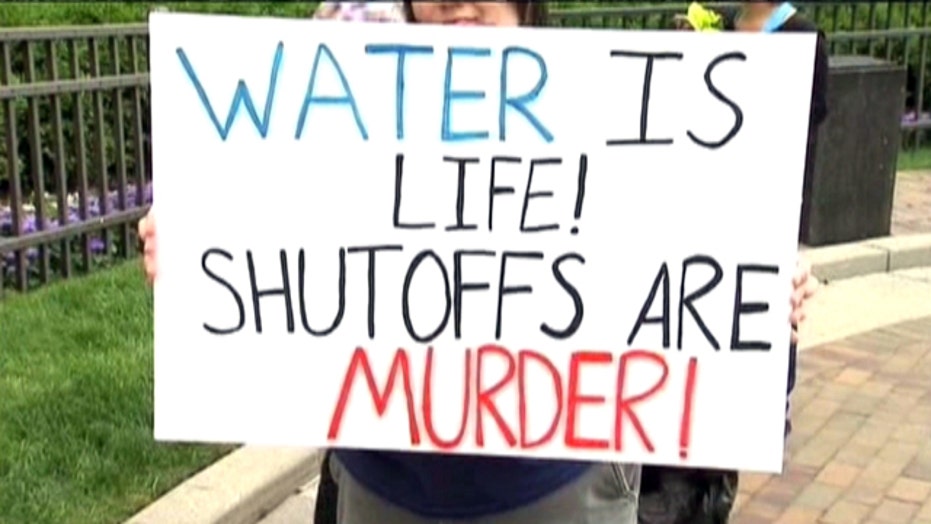 Detroit officials are fuming after two visiting United Nations lawyers scolded the city for cutting off water to delinquent customers and described the shut-offs as a “human rights” violation.

The response follows a three-day visit to Detroit -- which desperately is trying to bail itself out of bankruptcy -- from two representatives with the U.N. Office of the High Commissioner for Human Rights.

“It is contrary to human rights to disconnect water from people who simply do not have the means to pay their bills,” Catarina de Albuquerque, one of the two representatives, said Monday at the conclusion of their visit.

“I heard testimonies from poor, African American residents of Detroit who were forced to make impossible choices -- to pay the water bill or to pay their rent.”

But the mayor's office blasted the U.N. review as one-sided. Alexis Wiley, Mayor Mike Duggan’s top aide, said the city is "very disappointed" with them.

"They weren't interested in the facts," she said. "They took a position and never once [before Monday] reached out to the city for data."

The policy change shuts off water to businesses and residents who either are 60 days past due or owe more than $150.

Detroit -- the country's largest municipality to file for bankruptcy -- reports making 27,000 shut-offs from Jan. 1 to Sept. 30.

Most shut-offs were halted for several weeks this summer to give residents an opportunity to enter a payment plan, but they have resumed with 5,100 shut-offs in September alone.

Detroit officials have defended the decision, arguing that customers collectively owed more than $115 million in delinquent water-and-sewer department payments before the city took action and that their efforts are improving the situation.

Ordinary residents aren't the only ones subject to the policy. Service was shut off to one city council member. And an investigation by a local news organization found city officials have collected on the more than $80,000 owed by the Joe Louis Arena, home of the NHL’s Detroit Red Wings, and roughly $55,000 past due from Ford Field, where the NFL’s Detroit Lions play home games.

Wiley also said Detroit is helping residents by improving customer service, getting 33,000 people in the payment plans and cutting residential calls for water assistance by more than 50 percent.

De Albuquerque and the other representative, Leilani Farha, visited Detroit after activists appealed to the U.N. for assistance. Among them was the American Civil Liberties Union, whose Michigan director Kary Moss said: "It's unfortunate that, in the Great Lakes State, we need a visit from an international body to remind us of our most fundamental obligation to our citizens. Water is life."

The representatives met with residents and with Duggan and water department officials for about two hours Monday morning.

De Albuquerque and Farha, also known as U.N. special rapporteurs, cited such other problems as the city’s drastic population decline, rising unemployment and the utility passing on higher costs associated with an aging system.

De Albuquerque said she has seen shut-offs in other U.S. cities and developed nations, but nothing like Detroit. "Our conclusion is that you have here in Detroit a man-made perfect storm," she said. "The scale of the disconnections in the city is unprecedented."

De Albuquerque and Farha say the mayor’s plan to help delinquent customers fails to help the chronically poor and those who face shut-offs. Farha also said at least some residents said their past-due bills were the result of city billing or accounting errors.

However, they called their conversation with Detroit officials "constructive." They also said they can't enforce recommendations but want to help the city and residents resolve the situation.

Some advocates took the issue to federal court, but the judge overseeing Detroit's municipal bankruptcy trial ruled last month he lacked authority to force the utility to stop the shut-offs.