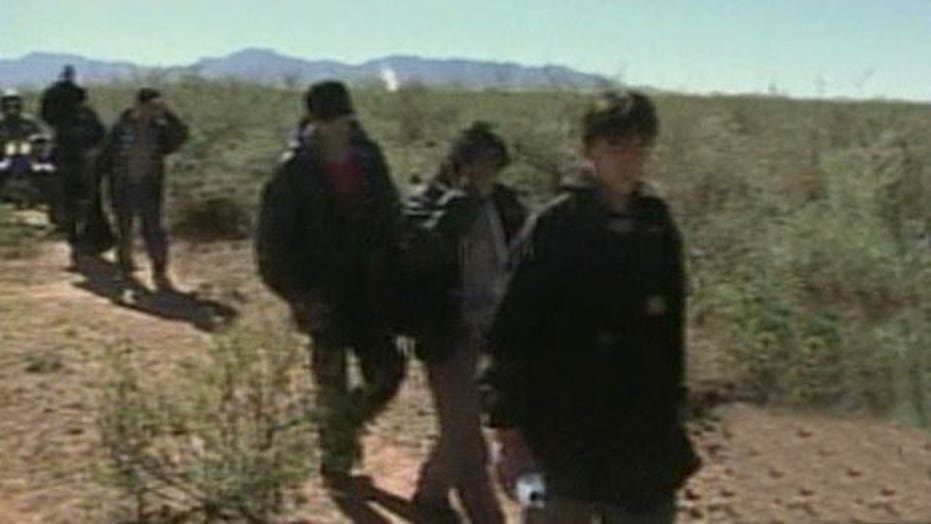 The Obama administration is launching a pricey public relations campaign to convince Central American children not to make the dangerous and illegal trek across the U.S. border -- but Washington's warning that those who cross will not get papers is belied by the reality on the ground.

While administration officials stress that children crossing the border will not get "permisos" to stay, statistics suggest they won't get deported any time soon, either.

Homeland Security Secretary Jeh Johnson, in an interview on Sunday, struggled to answer questions on whether the tens of thousands of Central American children who recently have entered the U.S. illegally will be deported or allowed to stay.

And the Los Angeles Times reports that deportations for illegal immigrant minors have dropped precipitously in recent years.

Immigration and Customs Enforcement data, according to the report, show that the number of minors deported or turned back at ports of entry fell to 1,669 last year, from 8,143 in 2008.

Fewer than 100 minors were deported from nonborder states last year, according to the report.

Republicans say that recent Obama administration directives have fueled the latest surge, particularly a 2012 order allowing some illegal immigrants who came to the U.S. as children to stay. But the Obama administration points to a 2008 Bush administration-era law that made it difficult to send back minors from Central America who cross the border unaccompanied.

The Obama administration is now seeking additional authority to speed up such deportation proceedings, but until then is pursuing a multi-pronged PR campaign whose results remain to be seen.

Announced last week, the $1 million media campaign will warn families in Central America that making the trek to the U.S.-Mexico border is not worth the risk.

The so-called "Dangers Awareness Campaign" will employ hundreds of billboards and some 6,500 public service announcements for radio and television stations in the target countries.

One offering has an image of a child's footprints in the desert running toward the horizon with the message in Spanish: "I thought it would be easy for my son to get papers in the USA. ... I was wrong."

According to CBP, the campaign will include media events in the U.S. in areas with high concentrations of Central American residents, including New York and Los Angeles. The PSAs themselves will run through Sept. 7 in Central American countries.

Announcing the ad campaign last week, U.S. Customs and Border Protection Commissioner Gil Kerlikowske said the message aimed primarily at Honduras, Guatemala and El Salvador is two-part: The trip to the United States is extremely dangerous, and immigrants who make it here will not be allowed to stay.

Kerlikowske said that 226 immigrants have died crossing the border since October. More than 52,000 unaccompanied children have been detained during the same period after entering the U.S. illegally, mostly in South Texas.

While the administration is seeking additional authority to address the influx, Johnson told NBC's "Meet the Press" on Sunday that the government still has "to do right by the children."