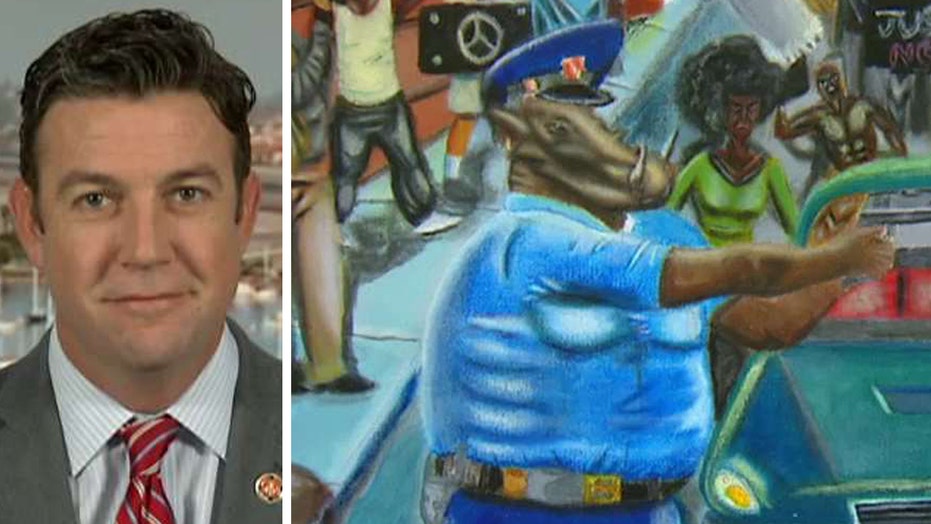 Democratic lawmakers plan to rehang a controversial painting on Capitol Hill that angered law enforcement groups with its depiction of police officers as pigs, after Republican Rep. Duncan Hunter personally took down the picture last week.

A Monday press release from the Congressional Black Caucus and Rep. Lacy Clay, D-Mo., whose office for months had sponsored the display of the student artwork, announced that Clay and CBC members will “rehang” the piece Tuesday morning in the Cannon Tunnel.

“The rehanging of this painting for public view represents more than just protecting the rights of a student artist, it is a proud statement in defense of the 1st Amendment to the U.S. Constitution which guarantees freedom of expression to every American,” the statement said, noting it had been “removed without permission or proper authority” by Hunter.

Hunter, R-Calif., personally unscrewed and removed the painting last Friday, saying he was angered by its depiction of law enforcement officers. He then delivered the painting to Clay’s office.

“Lacy can put it back up, I guess, if he wants to,” Hunter told FoxNews.com at the time, “but I’m allowed to take it down.”

After the piece was removed Friday, Ron Hernandez, president of the Association for Los Angeles Deputy Sheriffs, said in a statement they were “very pleased.”

He said: “At a time of our country facing rising crime and a shortage of those willing to work the streets as police officers and deputy sheriffs, we need to make it clear that depictions of law enforcement officers as pigs in our Nation's Capital is not acceptable.”

The Independent Journal Review first reported on the art.